I know I confused the universe by releasing a special Song Of the Mid-Week due to a confluence of events, but I wouldn’t want to deprive anyone of his/her/their/its Friday edition of Jeff rambling on about esoteric minutiae. So we’ll keep it short and focused. And lovely.

The Left Banke was a two-hit wonder – ‘Walk Away, Renee‘ and ‘Pretty Ballerina‘. But their two hits are indeed wonders, the most successful attempt to instill classical ingredients into art rock. In jazz, there was an entire movement in the 1950s, The Third Stream, producing quite a body of music that has held up over the years. In jazz this fusion was more serious, injecting a contemporary classical sensibility – Brubeck, the MJQ, George Russell. In rock for the most part, ‘baroque rock’, ‘Bach rock’, or (my favorite) ‘baroque & roll’ was rather pitiful and pompous, these two gems excepted.

These two songs employ baroque-ish mock-fugal lines, a quasi-harpsichord keyboard, a restrained little string section, and a light, breathy vocal. Kind of like a ‘kosher-style’ deli. 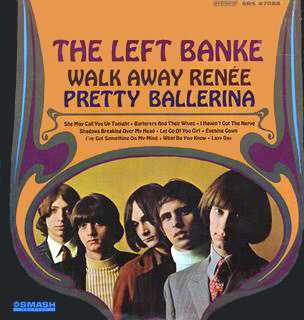 Judging by their history, The Left Banke (gee, nothing pretentious about the name, is there?) was a bunch of spoiled kids from New York. Their leader and songwriter, Michael Brown, was 16 when the group formed in 1965.  They made a few recordings which the record companies enthusiastically ignored. After the band had recorded the basic track for ‘Walk Away, Renee’, composer Brown split for the coast. The band finished up the track without him, Smash Records picked it up, and in July, 1966, it hit #5 on the Billboard Hot 100 (‘Satisfaction’ was #1), followed by ‘Pretty Ballerina’ (#15) half a year later.

They recorded one quite respectable album on which the two hits appeared. I knew it well ‘back in the day’ and recently revisited it. It’s quite pleasant, but I don’t recommend walking out of your daughter’s wedding to go look for it. If you happen upon it, it won’t hurt you. And I even performed the service of listening to the second album, a death-bed flop squeezed out of a dying band by artificial inspiration. Don’t bother.

So we’re left with the two wonder hits. Which one gets to be SoTW? Well, here were the judges’ considerations:

‘Walk Away, Renee’ was a bigger hit, you can hum it, you can dance to it, and it’s had more cover versions (most notably The Four Tops, which I will not understand as long as I live).

So the winner, hands down, is ‘Pretty Ballerina‘, that precious, delicate flower from December, 1966. Thanks, guys.

I had a date with a pretty ballerina
Her hair so brilliant that it hurt my eyes
I asked her for this dance
and then she obliged me
Was I surprised, yeah
Was I surprised,
No not at all

I called her yesterday,
it should have been tomorrow
I could not keep
the joy that was inside
I begged for her to tell me
if she really loved me
Somewhere a mountain is moving
Afraid it’s moving without me