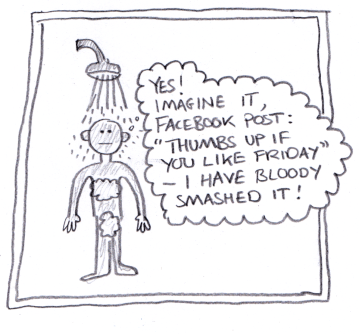 We’ve just started something that I’m rather proud of (note: this is specifically a thing we’re trialling in the London office of Wieden+Kennedy).

A few weeks ago we announced a bunch of changes to the way we work, some of the most significant are:

Depending on where you work these things may not look like much. But if you work in an ad agency (or similar company) they might seem pretty significant.

But so far it feels like everyone outside the company who’s asked me about it, or any comments that I’ve seen ‘out there’, have missed the point somewhat.

So, I’m going to have a go at explaining a couple of things. (This is by no means an exhaustive overview of the programme, so please don’t take it as such).

Yes, we do get called Weekend+Kennedy sometimes. Just as ‘72 and Sunny’ get called ‘72 and Sunday’ and BBH get called GBH. But there’s a reason these agencies, and others like them, have decent creative output. It’s because we work long and hard to get to the best work we can.

And let’s not forget lots of us enjoy it. These companies are amazing workplaces. We’re blessed with talented, curious, interesting people as colleagues. And the places we work are often nicer than our homes. So, for many of us, hanging out at work is hanging out with mates, in a nice place, and doing what we love. And we’re not taking that away from anyone!

So if the enemy isn’t hard work (and long hours) what is it? It’s pretty simple, the enemy is modern life. Specifically modern life lived through connected devices.

The same screen wakes us up in the morning, lulls us to sleep at the end of the day, AND delivers urgent tasks from an insomniac boss. This seems like a bad idea.

Always-on sounds a bit nicer than never-off. But they’re the same thing. And creative brains need time off.

I’m no neuroscientist, but from personal experience I know what it feels like when my brain’s exhausted and I’m whipping it, forcing it to think harder. That’s not when good ideas happen.

Although the brain isn’t a muscle, it might be useful to think of it like one sometimes. Yes, you need to exercise it. Give it problems to solve. Feed it good stuff. And stimulate it with culture and art (and, if you’re like me, trashy reality TV shows). But you also need to give it time off to recover. To figure stuff out.

I was reading a book recently (Wired to Create: Discover the 10 things great artists, writers and innovators do differently) and there was a big chunk about the creative brain’s need for solitude. A similar set of arguments also popped up again in this HufPo piece about Silence.

We need the time and space to be able to process the ideas and stimulation that are generated through the workday. Our days are filled with rampant collaboration and idea-generation. But most of us get far too few periods for silence and reflection.

It’s impossible to experience solitude when you’re connected to social media or email. We feel like we’re zoning out when we’re just browsing Instagram or whatever, but we’re not. We’re still hooked up to the big machines in the sky. And other people are liking stuff, and commenting and doing stuff to our virtual selves. You can never feel alone when that’s happening. (Which is the reason why it’s so addictive).

So, if our work-life and our social-life are both crammed with stimulation and connectedness, when do our poor brains get a chance to chill-out?

In the shower or course. It’s one of the only places we’re disconnected. Where else in the day are all distractions shut off? Oddly, it was in the shower where I came up with this random thought: If the Internet had transformed physical work like it has mental work, what would happen?

Say my job was shifting big rocks from one pile to another. And a tool was invented that let me carry on moving rocks when I got home. From the comfort of my sofa! Would I do it? Of course not. I’d be sitting at home saying “f**k you! My arms are tired, my back hurts, and I need a rest”.

Or maybe I could do some rock shifting on the train in the morning? Again the suggestion would be met with a jolly “f**k you!”. But for some reason because it’s ‘just’ brain-work we seem to be OK with it.

We are in a business that’s almost entirely about brain work. So we need to make sure that we’re protecting our people’s minds. Buying a bunch of gym passes, hiring in a lunchtime Yogi, or putting a NutriBullet in the kitchen is all good. But we felt there was an opportunity to do something more fundamental.

Our changes are meant to show that we trust our people to be the bosses of their own brain-time and brain-space. And we’re removing practices that allow others to trample over them.

It’s only been a few weeks since we implemented this stuff. But, from personal experience, I can tell you already it’s having a big impact. The after-hours email embargo alone has made a massive difference to how I feel in the evening. I can do something on my computer (perhaps even something work-y), and I don’t feel the need to check email. I instinctively did check a few times on the first few evenings. But the habit dies pretty quick when no new mail appears.

So instead of feeling connected to the office in a state of permanent amber-alert. I can relax and let my mind wander to the place where better stuff is.

This whole thing isn’t about working less. Or not applying your brain to work outside working hours. This is about recognising that we need a healthy balance between being ‘on’ and being ‘off’. And sometimes that’s hard to achieve when confronted by modern-life. Especially in huge, vibrant, 24hr- cities like London.

My hope is that, through the changes we’ve made, those who need it will find more mental rest. And conversely the people who want more stimulation will have capacity for that too. Both of these outcomes will, in theory, lead to brighter thinking and better work all round. Fingers crossed…

Like I said up top, this isn’t a comprehensive list of the things we’re doing, or the benefits we hope to see. If you want to keep track of what’s going on at the agency check the W+K London Blog: Welcome to Optimism

Lead image by Alashi for iStock