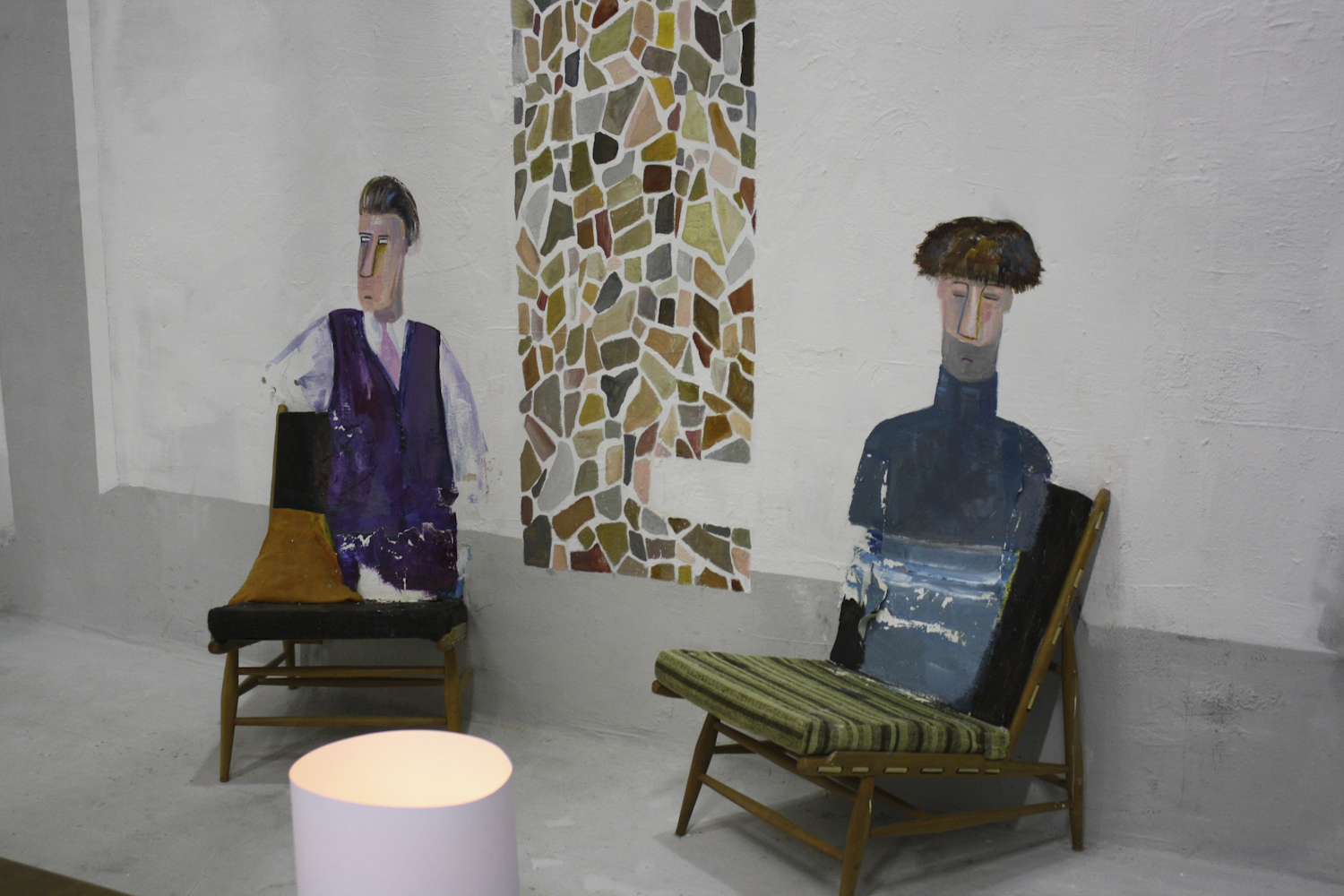 Jacobs made The Bigger Picture while studying at the National Film and Television School in Buckinghamshire. A moving short about a pair of brothers caring for their dying mother, it features an unusual animation technique – characters were hand-painted on to walls in life-sized sets, dressed with a mix of real furniture and papier-mache props. The film has received awards at festivals around the world since its release in 2014 and was named best British Short Animation at last year’s BAFTAs.

Last week, Jacobs received D&AD’s Next Director award, chosen by a panel of judges including Dougal Wilson and Kim Gehrig. Here, she explains how she made The Bigger Picture and talks about her next production, an animation dealing with divorce, loss and adultery…

How did you get into animation? And what sparked your interest in it?

How did those two courses differ and what did you learn from them?

I loved the character animation course because it was very technical – you were learning technically how to animate, which was very interesting – and it was a perfect course for me, because I’ve always been interested in people and characters and what they’re doing.

[The directing animation course] was very different because you work with a crew – you learn how to make a film and work with a film crew – and that was when I got into stop-motion, so it was a whole new way of working again. In the first year, you develop techniques and start working with others and in the second year, you make a film.

You made The Bigger Picture for your graduation project. How did the idea for the film come about?

The film is a work of fiction, but it’s based loosely on emotions and tensions I experienced in my family when my Gran was very ill – how that impacted on everyone and how we dealt with it as a family.

I think it explores human emotions and dynamics and family conflict. As I said, I’m very interested in people and what we all do and thought this was a universal subject – death is the overall theme of it and is something we all think about sometimes, I’m sure.

How did you end up using this technique, using painted characters and life-sized sets?

Technique-wise, I started to do stop-motion in the first year [of the directing animation course]. I was doing large-scale stop-motion, painting things on walls and adding in objects and things and it just sort of naturally progressed into The Bigger Picture.

I think what I particularly liked about it was that for me, it feels very much like a painting or illustration has become real. You’re mixing in real objects and the set and the characters are the same size as you are. The people are the same height too – actually, my characters are a little taller than me – and I can just step into that environment and sit in it and be a part of it.

How did you go about creating each scene – what was the process?

In terms of the sets, it’s a case of deciding what parts are painted and what’s real. Then, I get all of the props and adapt them or I make things out of papier-mache, take photograph after photograph and move elements around according to what I want to happen.

I make little mock ups of the set so I can see what they’re going to look like – it’s much easier than a drawing because you can see instantly where the line of perspective is. It was also useful for Max Williams [DOP on The Bigger Picture] as he could light the small set and get an idea of what he’d need for the full-sized ones. 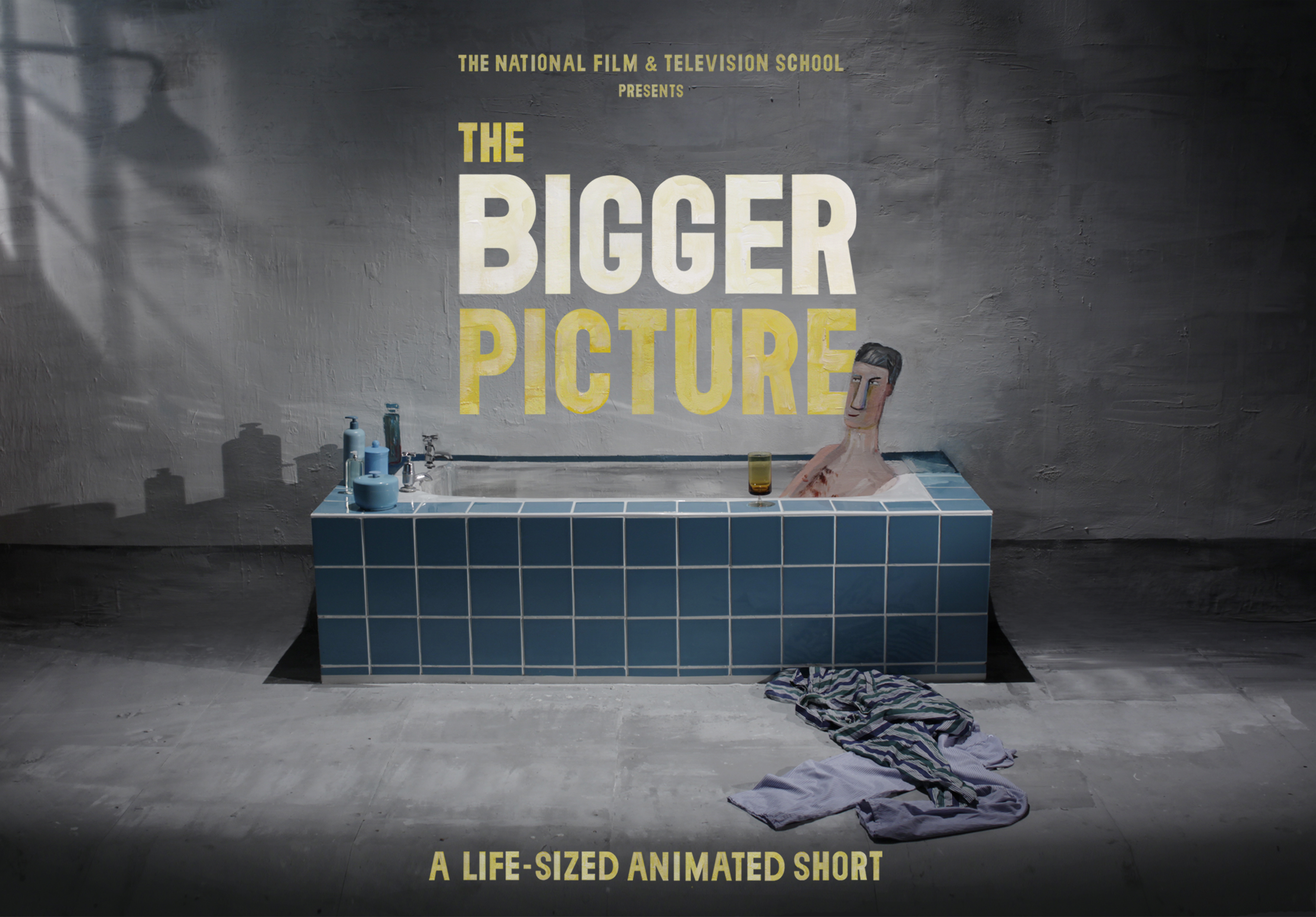 The Bigger Picture film poster (one of two)

How long were you working on the film?

It took a year to make but that includes post, writing and so on. We spent about six months animating. With animation especially, you create a storyboard and then you time it on a timeline called an animatic, so you’ve already made the film in a sense. You don’t want to have loads of bits of animations you don’t use because its very time consuming, so you’ve got to be very clear about what you want beforehand.

But there are always extra elements you decide to add in based on what you see around you in the set or what looks particularly interesting – for example, I knew I wanted to fill a room with water in one scene [when a character is making tea], but I didn’t know exactly how it would look. I adapted it when I got the cling film [used to make water] and at the same time thought, ‘it would be nice if the tray [being used to make tea] sort of sinks’, so that was all thought of when I was actually there in the set. You’re adding details all the time, but you plan and structure each scene beforehand. 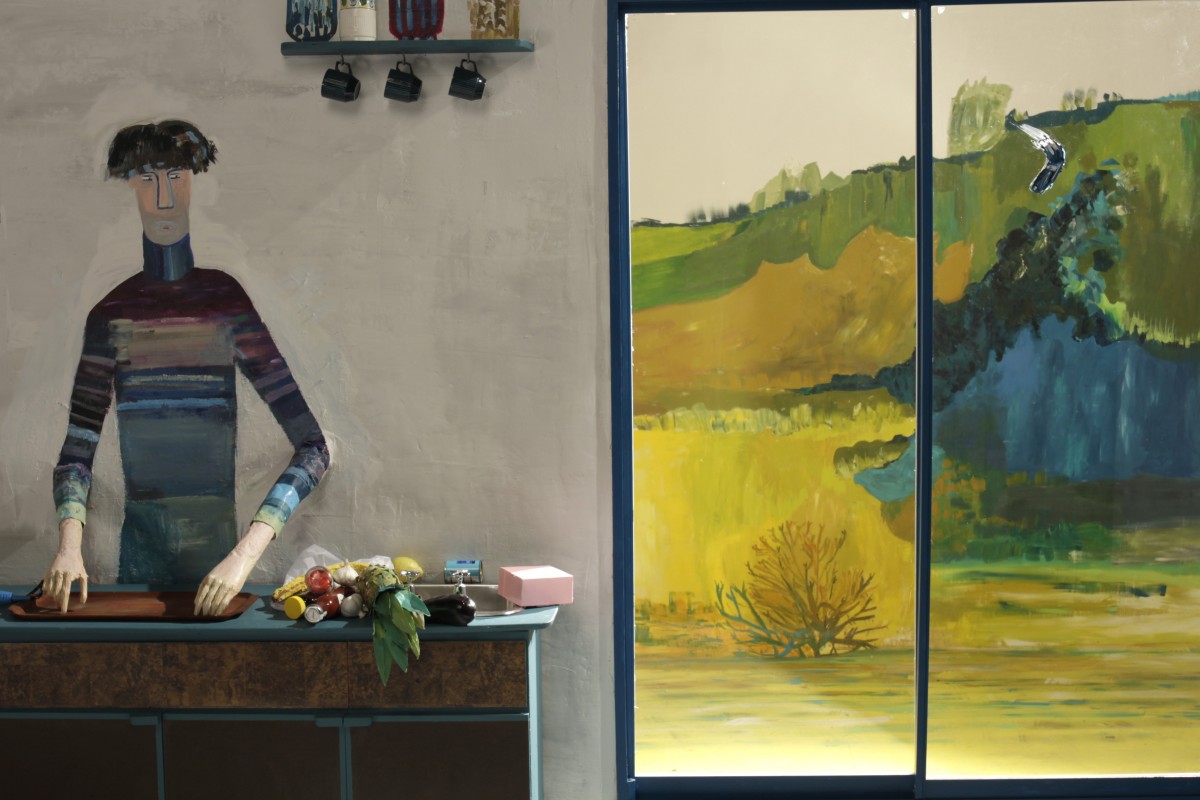 Still from The Bigger Picture

Was there anything in particular that inspired the aesthetic or the illustration style in The Bigger Picture?

At the time, I was still heavily inspired by illustrators and painters which I think shows in the paintings. Now, I’d say I’m increasingly influenced by all sorts of things. I think my natural drawing style is slightly 60s – both of my grandparents were artists in the 60s, so I naturally grew up with a lot of that stuff around and I think the style of it has sunk in somehow, because that’s what comes out when I paint. 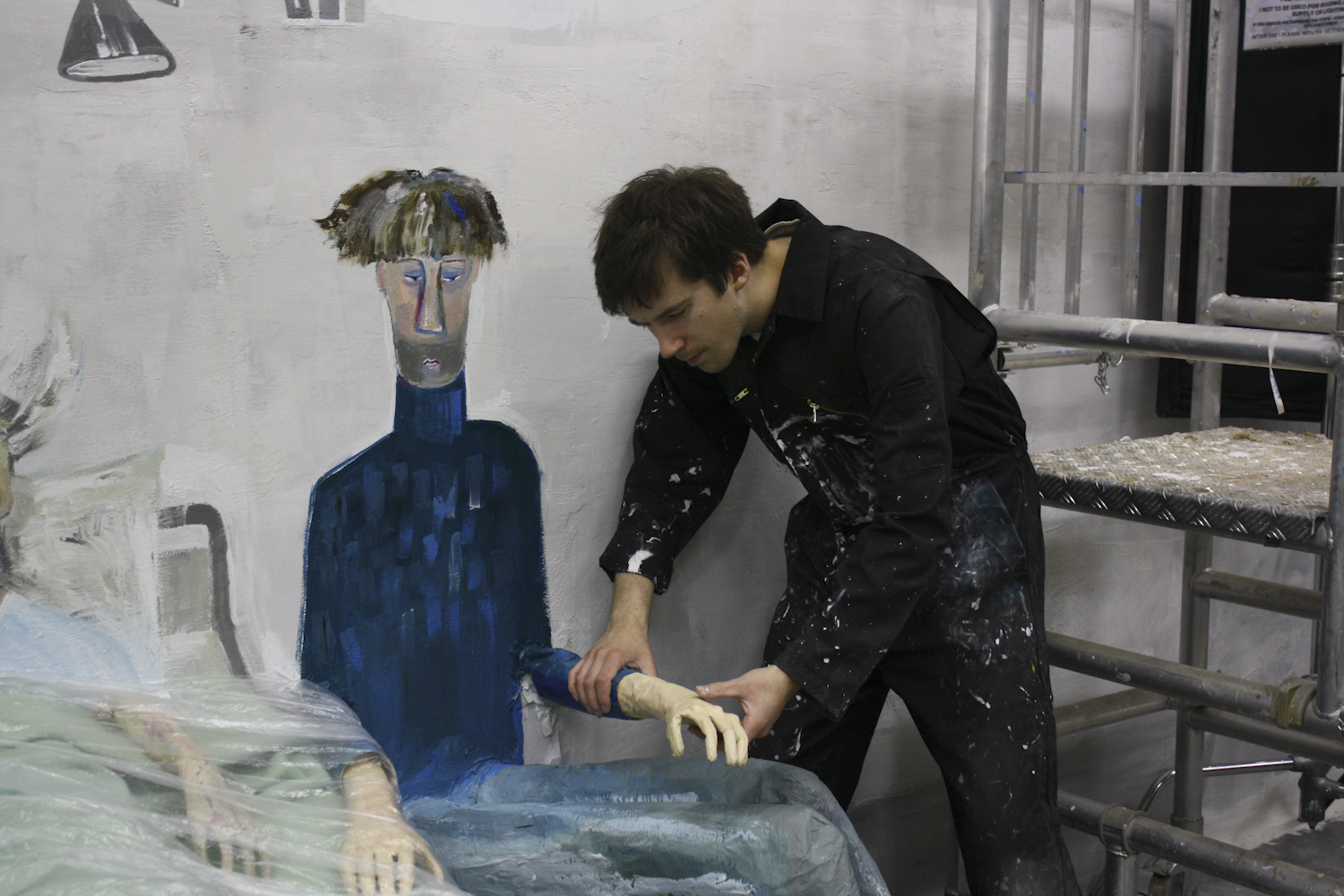 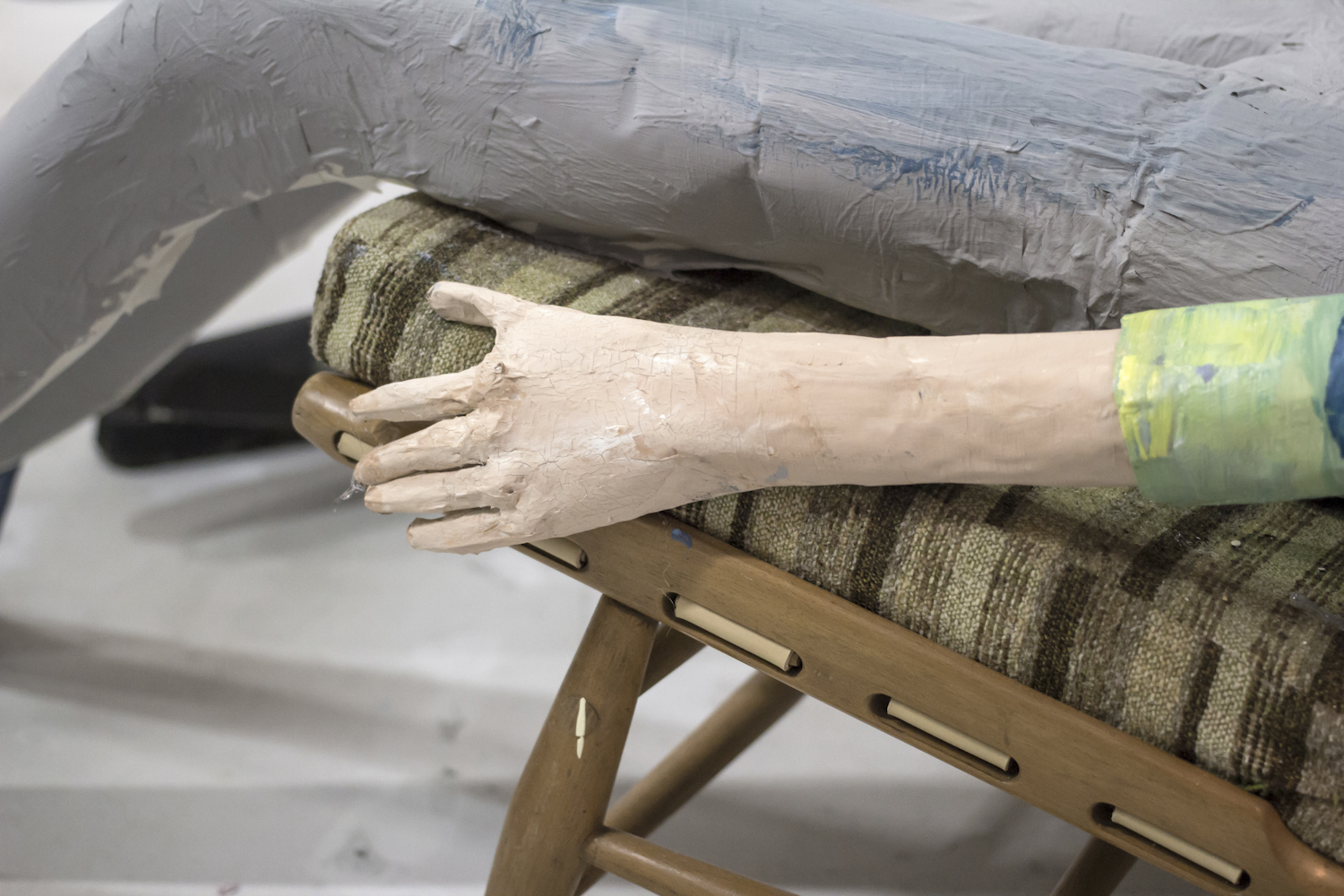 Who else did you work with to create the film?

I worked very closely with Christopher Wilder, a stop-motion animator who animated the whole thing with me. He’s co-director on my next film, and we studied together at Central Saint Martins, so we’ve worked together for six or seven years.

What are you working on now?

I’ve been working on a new film ever since The Bigger Picture. I started writing and designing it straight after finishing [The Bigger Picture]. The film is based on the divorce boom in the 1970s and 80s and it’s called The Full Story. The overall theme this time is loss and it’s about divorce and adultery.

It’s a similar length and the animation style builds on what we’ve done before, but with some added elements. We have two more months left of animating – by the time we finished, we will have been animating for 10 months – plus we’re hoping to do four to five months of post, so it should be out by the end of this year.

How did the success of The Bigger Picture help you in terms of making your next film?

It’s been a big help with funding and getting a really great crew together and just in general, it’s felt like a real boost. It can be quite hard animating for 10 months in a damp industrial unit, and you do quite a bit of soul searching, but having encouragement from so many people makes me realise you just need to keep going. 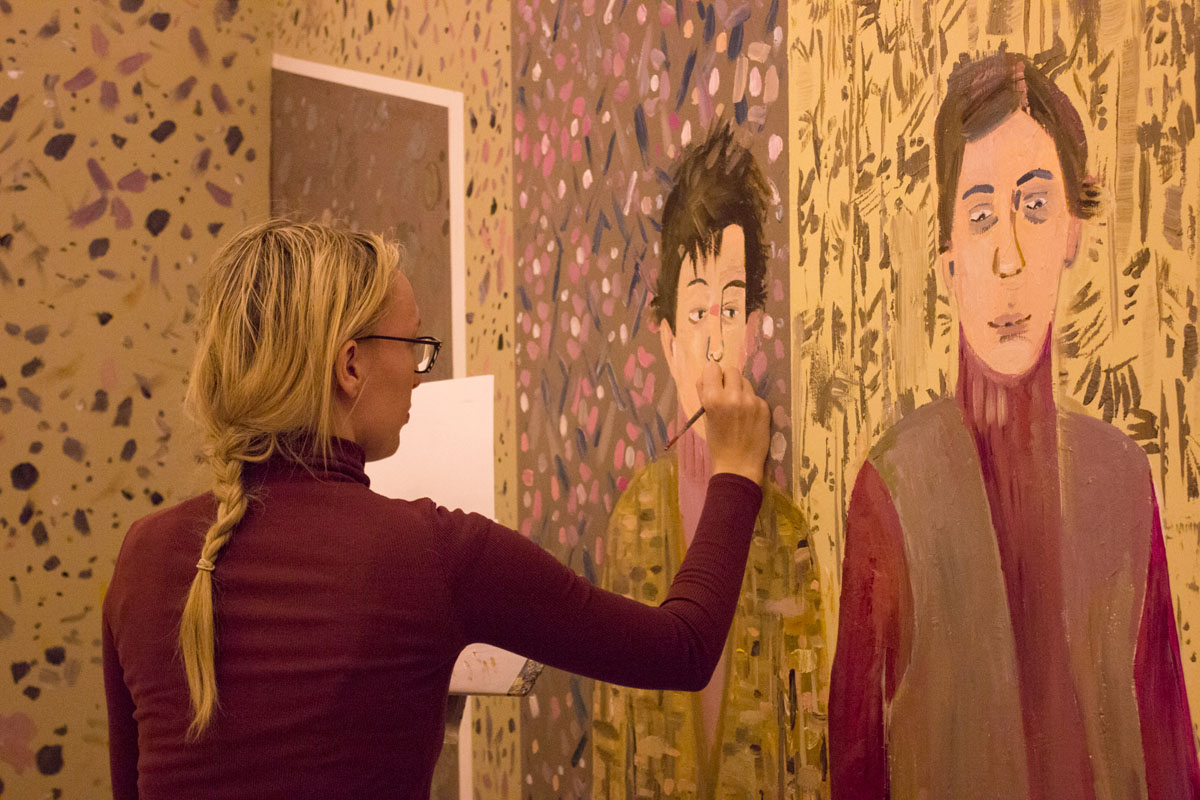 Daisy Jacobs working on her upcoming film, The Full Story, inspired by a rise in divorce rates in the 1970s and 80s

And finally, what advice do you have for other animators who are just starting out?

I would say the most important thing is to make something that is yourself, that is you. It’s good to have lots of people inspire you but imitation is a bad thing – it’s just not something that will make you feel good in the end and I think you need to make things that are your own and have come from you and your viewpoint. That’s what we find interesting, I think, the individuality of things, so just be yourself.

More about The Bigger Picture at thebiggerpicturefilm.com. See all the winners from this year’s D&AD Awards at dandad.org