Designing for the law

What can you tell us about the legal sector from a branding point of view? What are the typical characteristics of the visual language used in the sector? What kind of qualities are law firms attempting to convey?

Jonathan Ellery: The legal sector is an area that has always fascinated me. It’s large, traditional and economically powerful. It’s a very intellectual sector filled with some very bright minds. It’s challenging.

From an identity and communications point of view, as a sector across the board it tends to be very bland. A lot of legal websites are very similar in their approach and there are very few that stand out visually or indeed culturally. They all tend to say the same things and are surprisingly unsophisticated.

There is an awful lot of ‘brand stuff’ that just sits there doing very little. Generally there seems to be a disconnect with how the legal world communicates successfully to the world around it.

As with any other business in other sectors, law firms have to move forward engaging with the world around them and the successful law firms out there tend to be forward thinking in the way they do business. Traditional values, especially in law are very important, but they can also be damaging in a business context if they slow the ability, or weaken the intent to move forward.

Why did Rosling King come to you? What were they hoping to achieve?

What work did you do with them before showing them any visuals?

As with any identity project we researched the legal world thoroughly and this formed the basis of a lot of early and very enjoyable conversations, workshops as such. Even though at this stage we actually haven’t started designing anything, the workshop still tends to be very visual, a room full of things to respond to. This essentially means surrounding ourselves with relevant points of reference, which may be other law firms’ identities, their colour palettes, screengrabs from websites, things that we feel are terrible and we should stay clear of, and things that we feel are interesting and move towards. We also show at this stage identities from completely different sectors that are relevant in some way. This can come from anywhere, fashion, film, architecture or even music. It’s about stimulating a conversation, extracting points of view, to unearth and understand any politics that we need to be aware of, and ultimately to gain insight as to how the clients think and see the world around them. It gives us a chance to really talk with and get to know the client. It can be fun, and if it goes well, which it generally does, can give us as a team an informed place to structure and start designing for a creative and strategic presentation.

Did you present more than one route? If so, what were the others like?

Over a period of time we presented many different ideas and many different approaches. We started off just looking at very simple things: how a simple typeface choice can be important, logotypes, caps, upper and lower case, how all these little details can be significant. As the presentation developed other things came into play such as form, a logo and the name itself. From this, conversations developed. For instance the subject of classicism versus modernism in the context of the legal landscape was discussed at length as was the politics that can come with a simple colour choice. A presentation at this stage has to be informed and well structured. 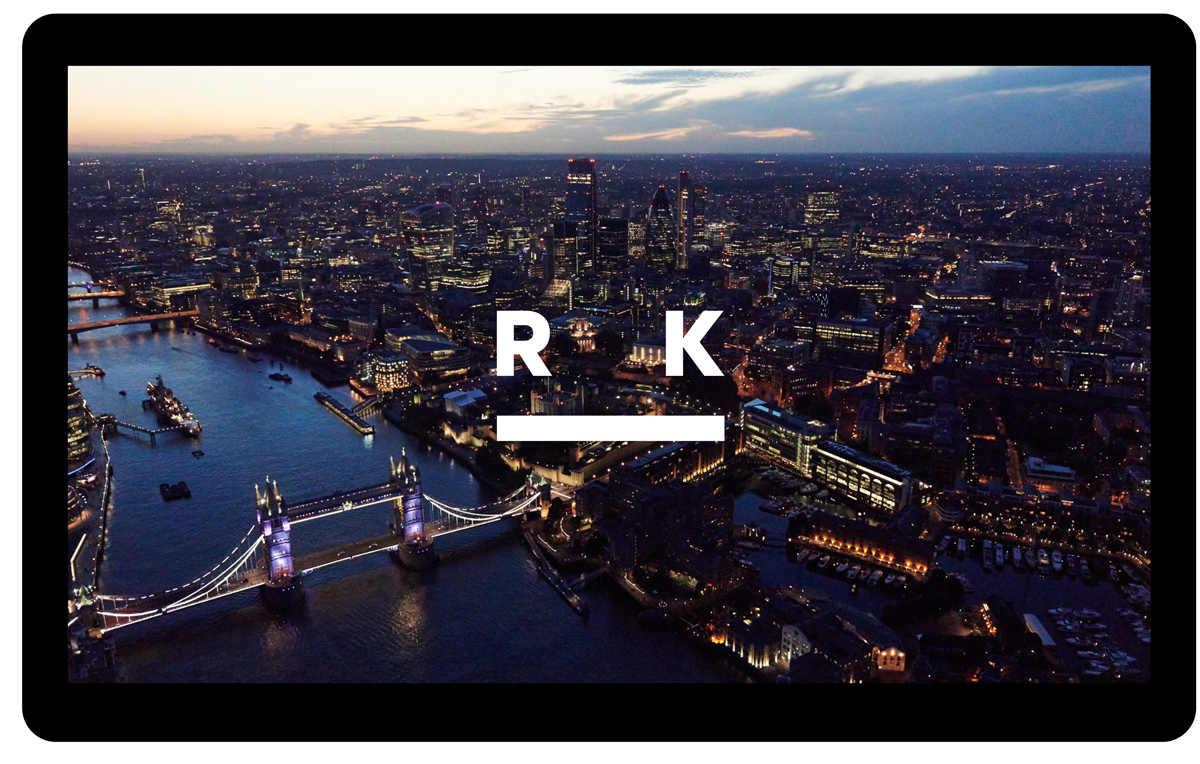 Why this route? What is it trying to say about the firm?

The chosen route is simply a manifestation of what they actually are. They’re brilliant at what they do and how they operate both in the UK and internationally. There is a refreshing modernity to the way that they operate which filters down through all aspects of their business including the working environment, which needless to say is spacious and full of light with simple clean lines. A modern, simple, clean approach was the natural way forward. Cool, powerful and effortless.

Strategically the new identity and surrounding visual language deliberately takes RK up and away from the legal brand sector norm. This was important to the partners at RK as it was for us as designers. Moving forwards, progress was important.

Typically, legal firms make great play of the partners’ names – why change to just using initials? Was there resistance to this?

Removing the names from the identity itself to an abbreviated version was a big move forward for them as you could imagine. Rosling and King as individuals had long since left the building and both internally and externally RK as a name was used a lot. For the partners the decision to change to RK signified the dawn of a new era, an era that was exciting and one they felt very comfortable with.

What is the thinking behind the underline and the space between the R and K?

Regarding the identity itself, it is what it is. In reality there is no singular conceptual idea holding it all together. The thinking is intuitive and simple. The clean aesthetic, the space between the letters and the no nonsense underline were chosen because of it’s modernity and because it felt right for them as a business. For this project we encouraged the basic principles of modernism, that is to offload any unnecessary clutter. The underline is also used as a device at a lower level for animated graphics and print.

A logo can only do so much. Working closely with the RK team we put a lot of thought into the visual language that surrounds the identity. A lot of film and photography was shot of London both from the air and on the ground culminating in RK having it’s own image library. This gives an indication as to just what sort of company they are, determined to avoid mediocrity moving forward and not wanting to appear the same as all of their competitors. 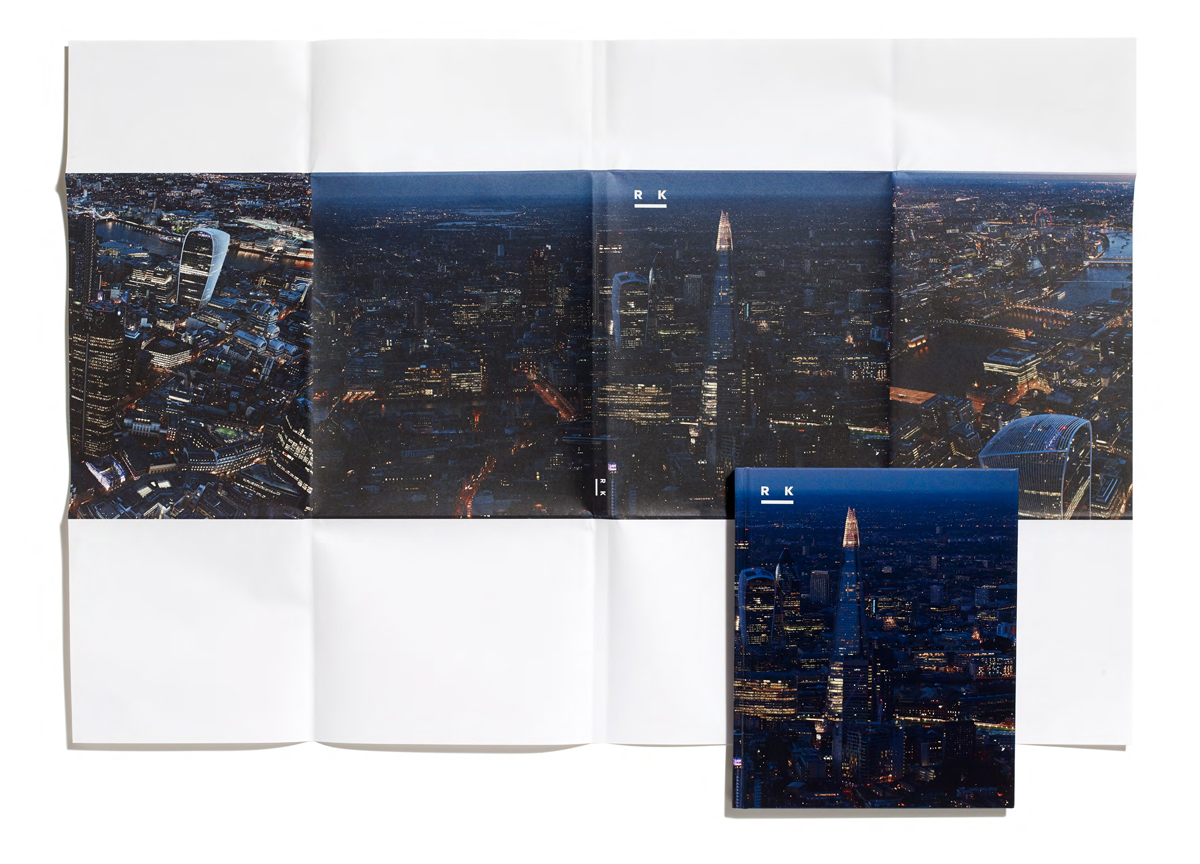 You’ve used photographer John Ross on a lot of jobs but he is perhaps better known for studio work – what made him the right choice for these shots? What role do they play in the overall identity?

We’ve worked with John Ross over many years now, and although we work with many photographers, when it comes down to a complicated and technically demanding brief involving helicopters, still and moving image such as this, we find John Ross to be one of the best there is. In reality the shoot could have been given to more than one photographer, but we felt working closely with John across all of it that we would get a better result. He takes on board and understands our art direction very well, even though he’s not too keen on helicopters. The film and photography together form a very significant part of the new identity.

Finally, how will you evaluate success for the job? What will it need to achieve in order for it to be considered a success?

At the beginning of any project I often say to new clients that the result of a successful new identity should be an increase in their business performance. Whether that is in a corporate or cultural sector it makes no difference. A successful identity will make their business function and perform better and should ultimately impact the bottom line. That is the power of good design.