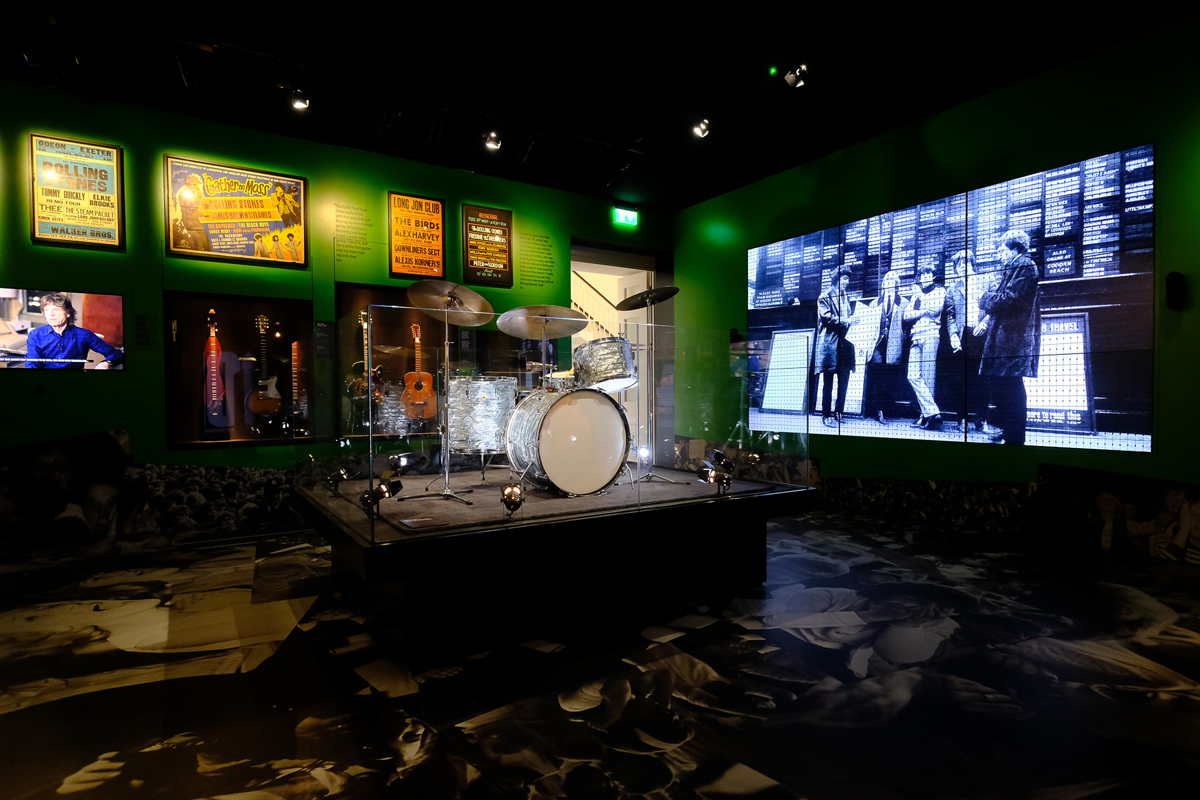 Exhibitionism opened at the Saatchi Gallery this week and will travel to 10 cities in the next four years. The show begins with a brief introduction to The Stones’ 50 year career: digital graphics present a timeline of their musical output (over 600 songs) and a map of their 1800-plus gigs, while a multi-screen display combines footage of screaming fans and vast arena tours with headlines documenting drugs charges, arrests and shock departures.

From there, it’s on to the band’s first flat in Edith Road, Chelsea, which has been recreated to scale – and, as Keith Richards puts it, is “a pigsty”. Unwashed dishes fill the kitchen sink and a Formica dining table is littered with dirty plates and cigarette butts. The flat’s only bedroom, with peeling wallpaper and spots of mould on the ceiling, houses three unmade single beds (occupied by Mick Jagger, Brian Jones and a roommate), while the living room houses another bed (Richards’), a tatty armchair and a sofa. Blues music drifts out from a record player and vinyl records are scattered across the coffee table.

The attention to detail is impressive. Accompanied by a recording of the band recalling what it was like to live there, it offers an immersive experience – you can almost smell the stale cigarette smoke. Russell and Miller sourced vintage packaging such as bottles of London Pride, a discarded Galaxy wrapper and a 1963 copy of the New Musical Express on eBay to create the installation. Wallpaper and carpets were manufactured by a company that specialises in reproducing vintage designs, then artificially aged to look suitably worn.

[of the installation] had people walking by it like a diorama, looking through a party wall with the studwork and plaster palled off, so you were looking through this grid of raw timber,” says Russell. “But that intimacy just wasn’t there. We thought people should be walking through it, it should be around them.”

“Having the voices [of the band] in there adds so much,” adds Miller. “Without them, you might think it was a little overdone, then you listen to them and you realise it’s a pretty accurate representation of just how dirty it was,” he says.

Another room documents the band’s rise to fame. There are early gig posters for London shows alongside their first recording contract, handwritten Q&As for a fanzine (in which Keith expresses a distaste for brass bands and striped pyjamas, while Bill Wyman lists his interests as ‘girls, poetry and science fiction’) and a drum kit owned by Charlie Watts. A section on the band’s films broadcasts clips from Jean-Luc Godard’s Sympathy for the Devil and Martin Scorsese’s Shine a Light, while another on music videos lists a timeline of their promos to date. It’s difficult to get a sense of any one production but both spaces offer an overview of the group’s video output over the years.

A fascinating set of displays on the band’s visuals offer a look at their stage designs, album artwork and the iconic Rolling Stones logo. Designed by John Pasche, the symbol was inspired by an image of the Hindu goddess Kali. (While it’s often associated with Jagger’s mouth, Pasche this was not a conscious influence at the time).

The logo is reproduced as a 3D sculpture and appears alongside Walton Ford’s image of a gorilla with the Stones’ mouth, used on the cover of their 50th anniversary album, and anniversary logos designed by Shepard Fairey. The display highlights the design’s versatility and enduring appeal – as Russell points out, it’s an image that can be endlessly adapted and, with its hint of rebelliousness, sex and seduction, is one that “perfectly sums up” the Rolling Stones brand.

An adjoining room (shown top) focuses on the band’s posters and album art, with prototypes and concept sketches of covers by Peter Corriston, Stefan Sagmeister and Andy Warhol alongside photography by Robert Frank, Gered Mankowitz and David Bailey. Early posters feature straight-up portraits of the band, while those created in the 1970s and 80s use more conceptual and often surreal imagery. What’s evident is the band’s close involvement in the design of artwork, something Jagger notes was integral to establishing its image. (Items on show include sketches and detailed briefs for tour logos and visuals by Jagger and Watts, who trained as a graphic designer and worked for Bob Gill before pursuing a career in music).

“They really used design in a huge way,” says Miller. “It’s also a really varied aesthetic – over that length of time, they were never pursuing a look over and over, it was very mutable. From John Pasche to Warhol, it’s extremely varied,” he says. Referring to the band’s collaborations with some of the leading artists, photographers and designers of the 70s, 80s and 90s, Russell adds: “They are always seeking out people at the top of their game, I think.”

Another fascinating display houses to designs for the band’s live shows, which features 3D scale models of ambitious sets created by Mark Fisher (Stufish) for their Bridge to Babylon and Steel Wheels tours, plus plans of the lotus-shaped stage from their 1975 Tour of Americas created by Broadway designer Jules Fisher. Russell says he and Miller commissioned the models (the originals are no longer in existence) to highlight the scale, intricacy and complexity of these designs.

“It’s difficult to understand the scale of the sets just from footage,” explains Miller. “I think sometimes your eyes glaze over when you see photos of these things, or videos, and you don’t stop to think about how they designed that, built it, performed on it, moved it to another stadium and built it again. These things were like performance buildings, and when you look at the footage, it helps, but it’s way more powerful with the model right behind you,” he says. Video commentary explains how the band were experimenting with ambitious staging at a time when most musicians would just show up and play. “They really invented stadium rock,” adds Russell. “The scale of their shows was immense, and they were really pushing boundaries.”

A section documenting the band’s style over the years begins with a photograph of them wearing matching dogtooth jackets, an identikit look they quickly rejected in favour of developing individual styles. (Richards said they felt the notion of having ‘uniforms’ was “archaic and stupid”). Outfits on show range from embroidered jackets and skin tight catsuits from the 70s and 80s, to feather capes and embellished coats designed for Jagger by Alexander McQueen, Marc Jacobs and Prada.

Russell and Miller have been working on the exhibition for 18 months and say the band were closely involved in its design and curation. “The first meeting, we thought we would run through what we had developed and that they might stay for an hour, maybe two. But they were there for over four,” says Miller.

The initial concept was informed by the show’s themes – Pentagram was asked to design a series of spaces each looking at a particular aspect of the band’s work, rather than a show arranged in chronological order. After developing a rough design, the agency 3D printed scaled models of the different gallery spaces to walk the band through it and Jagger toured the show via video link ahead of the opening to offer feedback. “Mick in particular was very perceptive … and the band were really attentive to details,” explains Miller.

“In the recording studio [one gallery features a replica studio based on one the band used to record in in West London, alongside interactive displays allowing visitors to mix tracks], it had to be the right sound board, the right instruments, the way everything was set up had to be true to the actual process. They were never like, ‘that’ll be fine’ – they were meticulous. It’s nice, because you realise it really matters to them,” says Miller.

Graphics for the show are bold without dominating: a glowing neon display reading ‘Ladies and Gentlemen’ is used to welcome readers to the show, but graphics are used mostly to guide visitors from room to room and place each display in context, without overpowering or battling with the media on show. Introductions to displays feature bold, condensed type, inspired by the aesthetic of the band’s early gig posters.

“They provide moments of continuity that help tie everything together, I think – you have that sign in glowing red, and then it’s just there to announce the themes. I think it’s pretty effective,” says Miller. 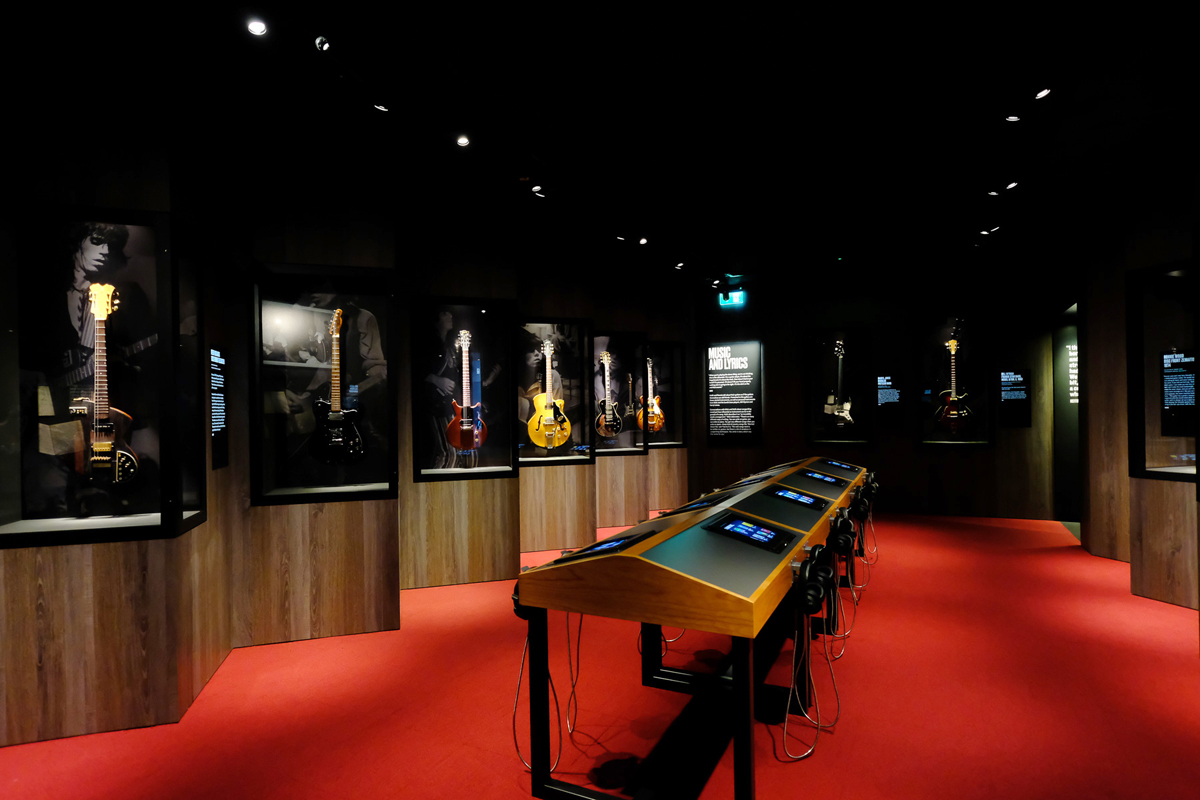 “There was always a danger that in giving every room its own aesthetic, the whole thing could be too disparate but I think there are moments that just help stitch those little things together. It’s just this baseline language,” adds Russell.

With show going on tour in several galleries, Russell and Miller say they had to come up with a design that could be reshuffled to suit different venues.

“[It was very much about] trying to orchestrate that journey through, and ensuring the pack could be shuffled – the beginning should stay where it is, and the performance at the end, but everything in the middle, depending on what spaces we have to play with next time, can be shuffled but will still have a coherence to it,” explains Russell.

The show isn’t a comprehensive history of the band, or an academic assessment of their contribution to pop culture – rather, the focus is on entertainment and in offering visitors an immersive experience, whether through a recreation of their flat or a backstage area kitted out with a makeup table and the sounds of people frantically communicating over walkie-talkies (the show ends with a walk through the backstage area into a screening room, where visitors can watch a Hyde Park gig remastered in 3D).

At £19 a ticket (and £21 on weekends) it’s not cheap but for Stones fans, and fans of the band’s artwork, Exhibitionism offers a rare chance to see a vast amount of instruments and memorabilia up close. Russell and Miller say the show’s primary focus is on entertaining visitors and with its mix of media, the pair say working on the show was more like designing a concert than a traditional museum or gallery experience.

“So many exhibitions we do have a very almost pedagogical element – this is entertainment and it’s a different lens,” says Miller. “So there’s all the details, the facts and the dates, but the first thing is really to make it visceral and fun…. It’s a different mindset I think and it makes it more free. You’re thinking ‘what is dramatic, what is exciting, what is fun? What are people going to enjoy?’ and the narrative becomes almost secondary,” he explains.

“The wider collaborative team was enormous,” adds Russell. “It wasn’t just us and the curator, it was us, the curator, the band, the lighting designers, the media designers. It was much closer to a concert, and the producers [of the show] really come from the world of concert producing,” he adds.

Exhibitionism opens at the Saatchi Gallery today until September 5. See saatchigallery.com for details