Films from Here: Arab Cinema, Out of Frame 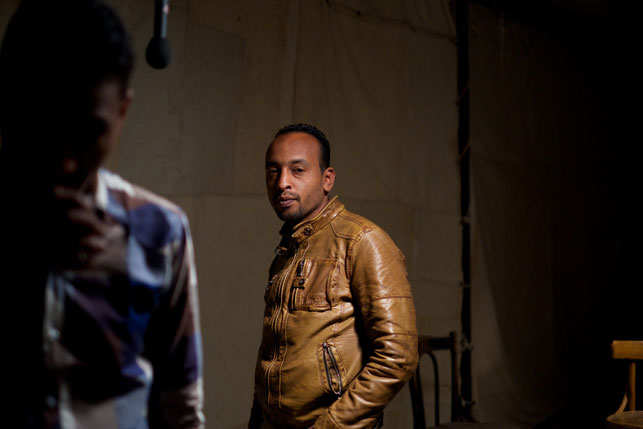 Out on the Street. 2015. Egypt. Directed by Philip Rizk, Jasmina Metwaly

In recent weeks, filmmakers featured in the series Films from Here: Recent Views from the Arab World have been sending me their thoughts on their films (which we will be sharing on MoMA’s social media channels). The Lebanese director Ghassan Salhab—whose films were also included in the 2010 and 2011 editions of the momentous Mapping Subjectivity exhibitions, an inspiration in my own research—sent me this:

In one way or another, cinema is inevitably a record of the world around it, while at the same time the present moment escapes it. We could say that cinema is prophetic, or always lagging behind history. It’s perhaps even to the side, out of frame.

These words capture what the exhibition seeks to achieve: far from presenting a monolithic argument about a regional message or style, Films from Here (note the open-ended title) is meant to provide entry points into certain ideas—how to approach history and its conflicts; how to represent, even bear witness, to the world as it exists around us; how to relate to documentary, art making, and activism as distinct but overlapping spheres.

Jasmina Metwaly and Philip Rizk’s Out on the Street encapsulates the complexities at play. The film seeks to move beyond the traditional documentary process and the on-the-ground videos that brought the 2011 Egyptian revolution to a global audience via YouTube. (The filmmakers are part of the media collective Mosireen.) In a certain sense, the premise has shifted; to the extent that narratives of what happened in Egypt are bound up with the interests of those broadcasting them, foreign media included, and those seeking to shape its future, the pursuit of “the facts” becomes problematic.

Stills from Out on the Street. 2015. Egypt. Directed by Philip Rizk, Jasmina Metwaly

As such, Out on the Street envisions another mode of engagement, a deeply thoughtful hybrid of fact and fiction, making me think of Salhab’s description of cinema as just out of frame. The film resulted from an acting workshop, in which 10 working-class Egyptians reenacted stories of injustice centered on the privatization of a factory. For the most part, the “actors” didn’t live through these events, and the one-room setting further highlights the artifice of the process at hand. Yet, through reenactment, the filmmakers offer a microcosm of Egyptian society in which economic, police, and justice systems are built to exploit, rather than serve, the country’s citizens.

The workshop process also gives disenfranchised individuals agency, not only by allowing them to “perform” the perpetrators of their harassment, but also by creating a forum, however brief, that exists outside the system that oppresses them. Conversely, the filmmakers consider the ethics around images of exploitation: “We don’t want to make a film that turns that harsh reality into a spectacle, a source of entertainment, but a re-evaluation of the past and an imagining of what the future could hold,“ they have written. By complicating the documentary approach, the filmmakers have created a work that is more than the sum of its parts, one that finds itself amid a wider constellation of ideas about labor, social justice, and the circulation of images (as indicated by its inclusion in Germany’s 2015 Venice Biennale pavilion alongside Hito Steyerl).

Jasmina Metwaly and Philip Rizk will join us for a Q&A following the September 24 screening of Out on the Street. A second screening takes place on September 27. Tickets are available now.