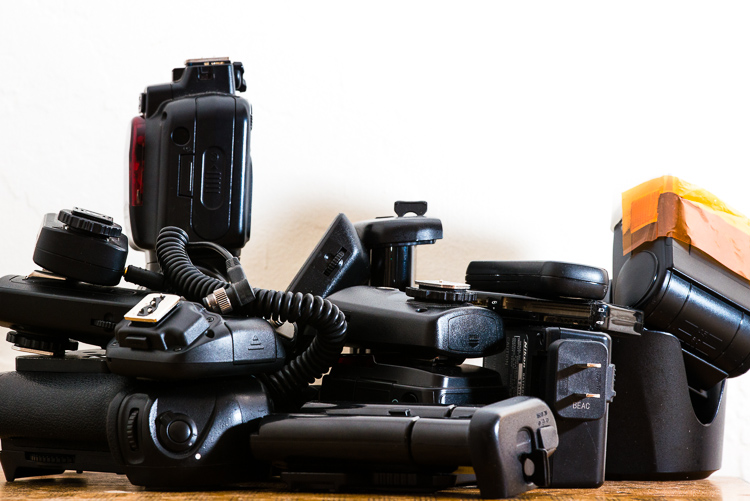 Following the big bang that introduced capable and affordable digital cameras, the digital photography universe has been expanding at an astounding rate. So much amazing imagery is being produced, and equipment manufacturers are working tirelessly to develop, and improve upon, the products you use to create those images.

Despite the tendency of some photographers to not even consider third party brands, that market exists and is flourishing. It seems that there are more players in it than ever before, and the competition is stiff.

The market for third party photography equipment and accessories is bustling.

If you are considering adding a speedlight to your arsenal of gadgets, it’s definitely worth having a look at third party brands. Don’t make the mistake of assuming that a product is inferior because it’s not the same brand as your camera.

Although the industry dominators (Nikon and Canon) have a large array of speedlights to choose from, you just might find that you have to pay for features which you will never use, or their products may not have the features you need.

One company that has gained some ground, making a name for themselves in the third party sector, is Japan-based Nissin. They are a dedicated photographic lighting company who just released a new flash system for Nikon and Canon (Sony version coming in September) and one just showed up on my doorstep. 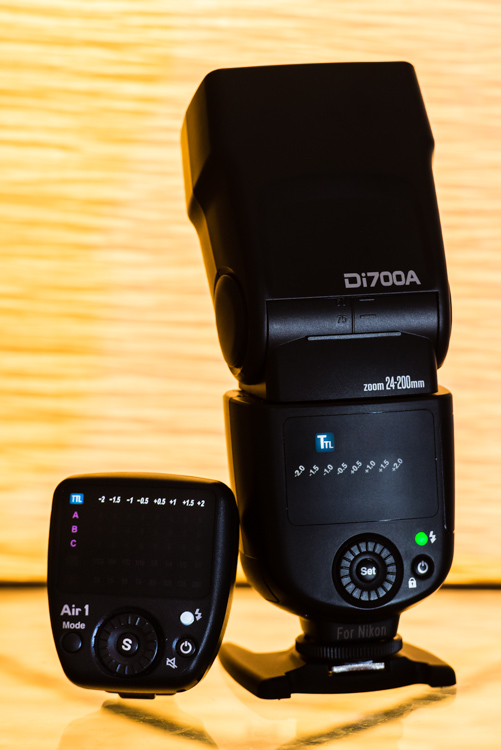 The Nissin Di700A speedlight shown with the Air 1 wireless commander.

I shoot Nikon so they sent me the dedicated Nikon system but don’t worry, the Canon and Sony versions are similar, so this review is still worth reading even if you’re not a Nikon shooter.

First of all, this is exciting for us Nikon shooters. Unlike Canon, Nikon doesn’t have any flashes with radio triggers built-in, only optical. Why? Good question. Get it together Nikon.

Excavating the Nissin Di700A out of its packaging – yes, that’s the alphabet soup name they gave this unit – it was instantly apparent that it is meant to rival the SB-900/910, at least in size and weight. 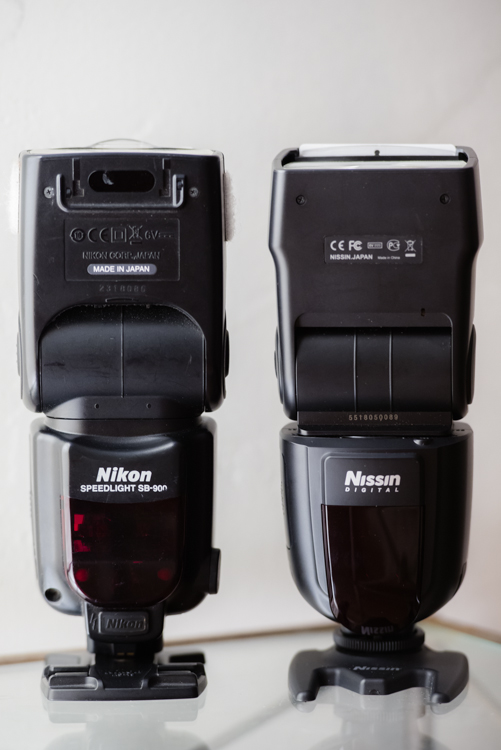 The Nissin is in many ways comparable to the Nikon SB-900.

A quick inspection of the unit shows it to be sleek, simple, and solid. The plastic seems heavy-duty and I suspect it would survive some abuse. The locking head swivels and swings into the same positions as its Nikon counterpart – 7-degrees down, 90-degrees up and 180-degrees left and right (as every flash should).

On the back, below the matte-finish LED screen, is a dial with a Select button in the middle, a flash test button, and the power button. They went for the minimalist approach which I applaud. It has a small rubber cover on each side; one with a socket for a battery pack hiding behind it, and the other with a PC cable and auxiliary sync inputs.

The metal hot shoe mount is a welcome sight but the circular threaded disc for tightening the flash onto the hot shoe seems a bit archaic. A slide-out diffuser and reflector panel are also familiar features.

You may have noticed that earlier I called this a camera system. The kit they sent me comes with a radio trigger called the Air 1 Commander. The hot-shoe-mount Air 1 matches the flash in most respects, but has an extra Mode button. It automatically locks into place when slid onto the hot shoe, and has a button which is held in to release it. Personally, I would have preferred the same button on the speedlight instead of the threaded disc.

I popped in four AA batteries, hit the power button, and a kaleidoscope of colorful lights sprung to life on the rear panel. However, the flash was effectively frozen and would not work at all. Come to find out, the Eneloop XX rechargeable batteries that I prefer to use for all of my speedlights do not work in this unit. I swapped them out for the regular Eneloops which work fine. The only difference that I’m aware of is the XX are 2,500 mAh compared to the regular’s 2,000 mAh (any electrical engineers out there please chime in).

Following the thread of simplicity that Nissin has going, I just tightened that baby down onto my hot shoe and it did what it is supposed to do, fired away in TTL metering mode.

A few things I liked immediately were: a quick press of the power switch locks all functions of the flash so you don’t inadvertently change settings, the tactile feel of the buttons and wheel are soft but feel very sturdy, and changing modes and adjusting exposure compensation is quick and easy.

Another issue I encountered was that the zooming flash head feature didn’t work. It zooms all the way out when deploying the small diffusion panel but did not respond when changing the zoom on any of my lenses as the manual says it should, nor does it respond to the manual zoom control feature of the Air 1. We’ll assume I got sent a defective unit. To play devil’s advocate, this can happen to any brand so I’m not going to throw them under the bus just yet.

The controls on the Di700A are intuitive and make it quick and easy to adjust and get the exposure just how you want it.

A detail that could prove handy is the standalone battery magazine. Spares can be purchased which can be pre-loaded for easy swapping. This can save you time and prevents fumbling around for batteries in the heat of the moment.

Perusing the instruction manual divulged that the flash has an overheating circuit which supposedly shuts it down for 15 minutes, to recover after firing 20 to 30 times (presumably at full power). This is a significant detail as 15 minutes might as well be an eternity for professional shooters. I immediately had flashbacks of the SB-900 which would overheat and shutdown often, and at the most inopportune times.

The system supports all of the nifty features found on the camera body: high-speed sync (FP for Nikon and HSS for Canon) to 1/8,000th of a second, red-eye reduction, slow and rear -curtain shutter, and on-camera exposure compensation which is added onto the unit’s own exposure compensation, covering two stops in both directions.

The Nissin Di700A not only has a built-in wireless receiver, but can also be optically triggered by the camera’s built-in flash. This is cool because you can mix and match flashes that have optical receivers. The Di700A and the Air 1 can be purchased separately. The Air 1 wireless commander claims a 100 foot effective range. Although this may seem generous, and plenty for most applications, the Cactus transmitters I use boast three times the range but do not support TTL metering, so it’s a trade off.

Using the Air 1 with the Di700A proved undependable. My first attempt at about 50 feet, with the flash behind a motorcycle for backlighting, was met with intermittent results. The signal seemed weak, and I had to move around to get the flash to finally fire. 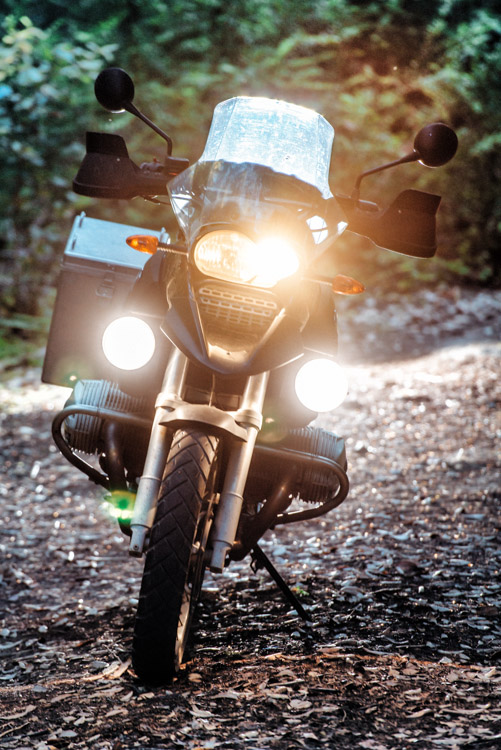 I had mixed results using the Air 1 to trigger the Di700A. The system struggled having the motorcycle between the flash and transmitter at about 50 feet.

The Air 1 can also support three groups of flashes, on eight separate channels, with exposure compensation for each group in half stop increments.

I would certainly recommend the kit to beginning through intermediate shooters, but despite Nissin’s efforts to offer some pro-level features, it falls a little short to meet the demanding needs of working photographers.

All in all, for a sub $300 kit, that is sleek and easy to use, versatile, and capable of wireless TTL shooting, the Nissin kit is definitely a strong contender.