How to advertise on Facebook: 6 tips for brands from Creative Shop’s Jill Gray 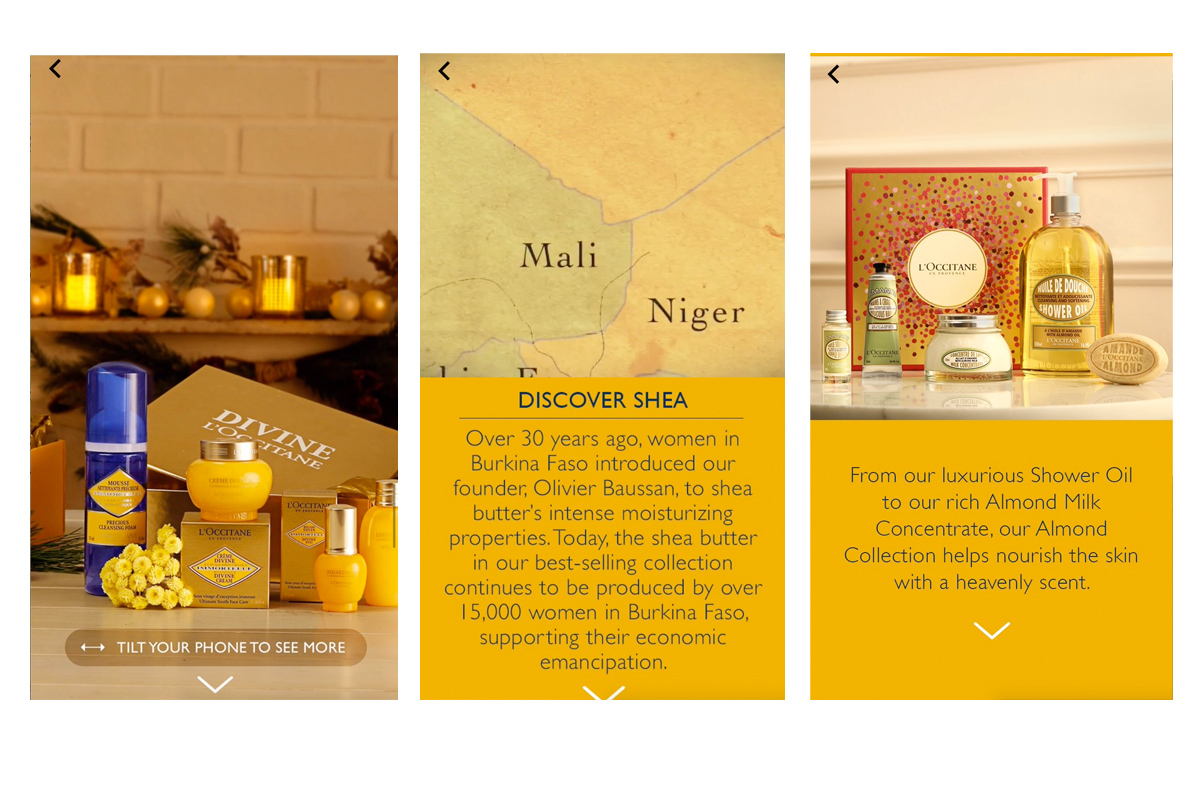 It’s only 12 years since Facebook was founded, but it’s hard to imagine a world without it – a staggering 1.5 billion people visit the site each month and in the US, one in every five minutes spent on a mobile is spent using Facebook or Instagram.

For advertisers, the site is both a blessing and a headache. With so much content and updates rolled out on a seemingly constant basis, it can be difficult to know who is seeing your posts and how best to get their attention.

Facebook’s in-house creative team, Creative Shop, works with brands and agencies to help them make sense of the platform and create campaigns for Facebook and sister company Instagram. It now has growing teams in the US, Europe, Africa, Asia and the Middle East and much of its work is focused on creating content for mobile.

An ad created using Facebook Canvas for skin care brand L’Occitane uses video, images and 360 view to promote the brand’s gift sets and explain the origins of its products

Facebook has also launched several new tools and products for advertisers of late, from updated brand guidelines and advice on its Business Pages to Canvas, a full-screen vertical experience designed for smartphones which combines text, images, video and call-to-action buttons to create a more immersive style of advertising. It has already been used by Guinness, Wendy’s, Mr Porter and Netflix, who worked with Creative Shop to create a campaign for Pablo Escabar drama Narcos using teasers, stills and articles about characters from the show.

While many of the principles for creating a great ad are the same on Facebook as on any other platform – a compelling story, strong copy and a good use of visuals – there are some key differences. “We’ve had over 50 years of perfecting the television story arc, but we’re really at the beginning of defining what that should be for mobile. Attention spans are significantly shorter, users are multi-tasking, and brands need to know that context in which their advertising is coming up,” says Gray.

Here, she outlines some tips for using the site and points out some things that brands should avoid…

1 Don’t treat social as an afterthought

Gray cites this as a common mistake made by brands and agencies, and says that advertisers should be investing in creating original content for social media if they really want users to take notice. “What’s really common right now is that you see brands and agencies at the last second saying, ‘What’s going to go on Facebook and Instagram?’ and it ends up being this mentality of ‘let’s just take the key image from the campaign and we’ll pop it on the platform. But that really doesn’t take advantage of the full potential of the platform,” she says. “

[Brands] need to be thinking about social media earlier in the process of creative development, and bringing that into the production schedule. If you’re going to do a film, do a version for Facebook.”

A campaign created for Carnival Cruises using Facebook’s new advertising tool, Canvas, which lets brands use a mix of stills, video, editorial and call to action buttons. The ad lets users scroll through photos of sandy beaches, 360 images showing the view from a ship and videos of people snorkelling. Facebook says users spent two minutes with the ad on average, and 50% scrolled through to the end

2 Shoot for mobile, not for wide screen

Speaking at TV marketing conference PromaxBDA in Barcelona this year, Gray said: “Everyone loves a good wide shot. It’s epic, it’s beautiful, it’s how you will always want to shoot things, but it looks a lot different in feed. When you’re holding a mobile in your hand, it’s just a lot smaller.” Instead, she recommends still shooting in wide aspect but keeping in mind a 1×1 grid so that a separate version can be created to better fit screens on a mobile. “It’s about maximising that space,” she adds.

3 Get to the point

Traditional advertising often adheres to a 30 or 60-second story arc but impatient mobile audiences are unlikely to wait this long for a ‘big reveal’. Instead, Gray recommends keeping a rhythm of around three seconds to keep viewers engaged. “People move really fast on a mobile, so you have to present yourself and set the stage quicker,” she adds. “You’re still telling a linear story, just quicker,” she says.

360° video is now a key focus for Facebook Creative Shop, says Gray  – but in order to create rewarding experiences, brands need to use this extra space to further or enhance a narrative rather than just for the sake of it. “360 isn’t pretty, and the novelty of it will wear off very quickly, but that capability combined with the craft of storytelling has amazing potential, and that’s something we’re trying very hard to push,” she explains.

Content should be mobile first and videos should reward movement, “otherwise people are going to get bored,” adds Gray. Creative Shop has also been working on a handful of narrative frameworks using split screens, circular stages and choose your own adventure models – in November, it launched a video for Nescafé, created with Publicis, which featured footage of people from around the world eating breakfast (viewers could move their smartphone in any direction to move through different clips). Creative Shop has also worked on 360° make-up tutorials with cosmetics brand Nars.

Rather than focusing on making social content that will ‘go viral’ or complex apps which require heavy input from users, Gray recommends thinking about content from a UX point of view – creating experiences which users can access seamlessly, rather than something that will disrupt their time on the site. “The majority of people would like a lighter weight experience,” she adds. “When you make an entire campaign about [going viral or getting a certain number of people to download an app] you make the campaign really small. One of the most common mistakes people make is still treating these platforms as social activations, rather than the really powerful business-moving platforms they can be,” she adds. 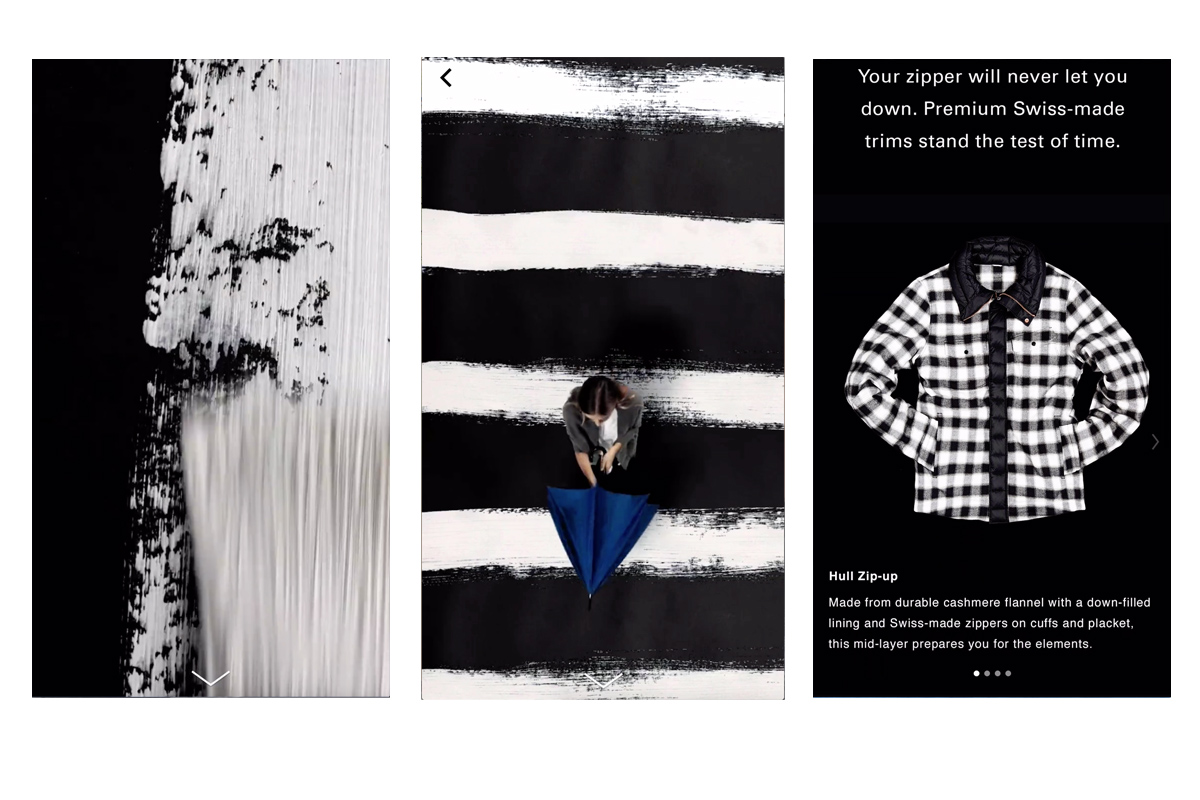 Stills from a Facebook canvas campaign created for Canadian retailer Kit and Ace. The campaign uses a mix of video and photography – it begins with a bold black-and-white video and moves on to pages highlighting various products and their technical features. Facebook says the ad led to 500 ‘offline conversions’ – in-store purchases as a result of watching it

Facebook users expect that content which shows up on their feed will be relevant to them, explains Gray. The platform’s targeting features allow brands to target users based on demographics such as age, gender and location as well as interests and behaviours (eg devise usage). “People like advertising if it’s relevant to them and relevance can come through being super useful, super entertaining, but it has to be right for the people receiving it. Our tools have been too blunt in the past to be able to do this, but now, it’s amazing how precise our targeting can be,” she says.

Last year, Creative Shop worked with Sky Sports to create a personalised campaign targeting Premier League fans to promote the channel’s Start of Season show. The show featured pundits and footballers discussing the League’s most memorable moments, and Facebook and Instagram users were invited to contribute by answering polls. The show was previewed in three parts on Facebook (you can see one film from the campaign here), and was watched by 1m users for more than 15 minutes that weekend. Creative Shop also worked with Sky Sports to create cut downs of the show which focused on specific football clubs and targeted videos at supporters of those clubs. “It drove their view rates tremendously, higher than anything they’d seen before – just through that simple step of planning ahead to personalise,” says Gray.

Another campaign for Zalando and Topshop used 1,000 versions of a film promoting a partnership between the two brands. Videos featured model and Topshop ambassador Cara Delevingne trying to pronounce the lesser-known locations that Zalando now ships Topshop’s clothes to, and videos were served to users in those locations. “It’s impossible to say that everyone should be doing 1,000 ads, but three versions are likely better than one. It’s also about making sure that the thing we twist around for those different versions is meaningful. At the end of the day, creativity is the thing that wins in all of it and the quality of storytelling is what’s important,” says Gray. 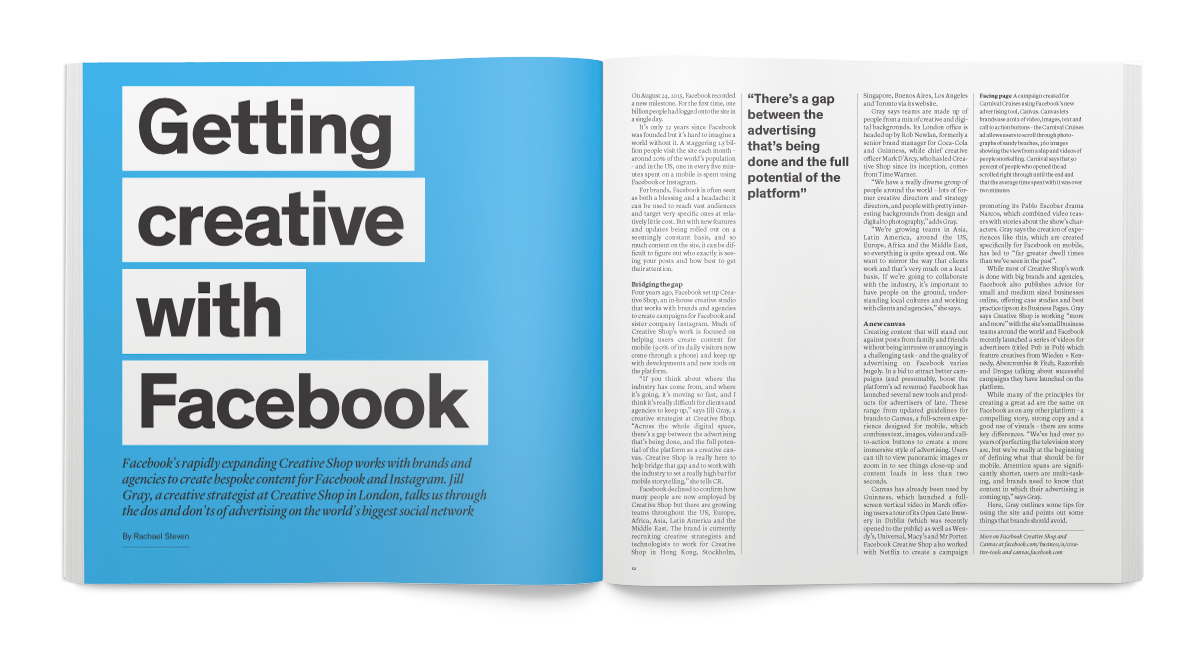 You can read the full interview with Jill Gray in our May issue, out now.
To subscribe to Creative Review, click here. To buy the May/Annual issue click here:

Read more here:: How to advertise on Facebook: 6 tips for brands from Creative Shop’s Jill Gray