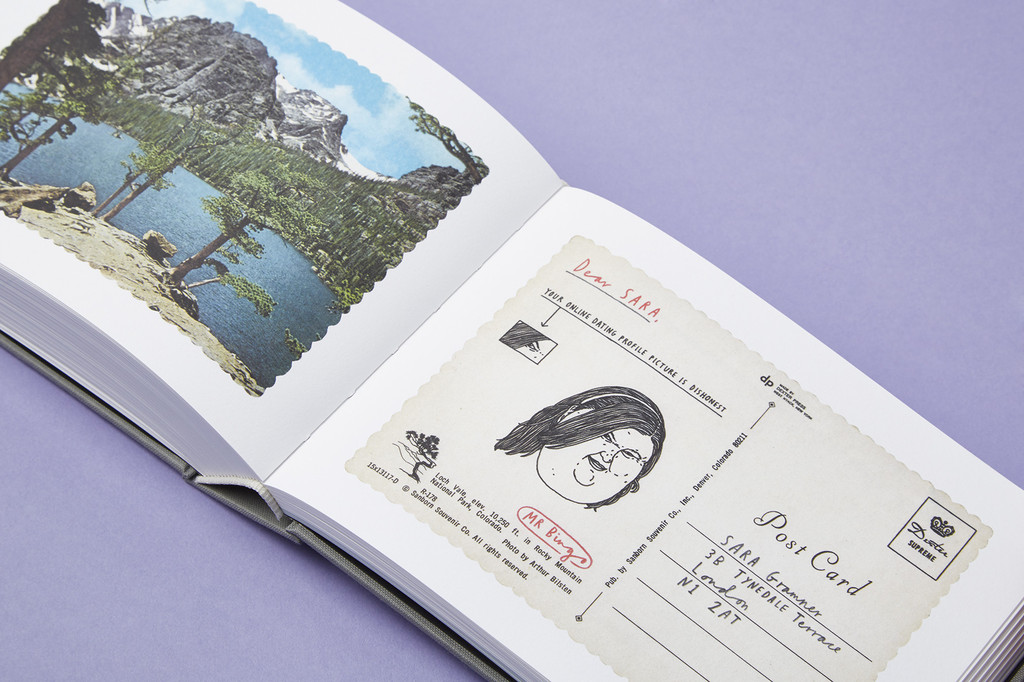 Mr Bingo’s artwork has appeared on ads, magazines, book covers and beer cans. But after working as a commercial illustrator for 15 years, he decided to focus his efforts on making abusive artwork for paying strangers instead through his hugely successful Hate Mail project.

Hate Mail began in 2011 when, after a few drinks in his studio one night, Mr Bingo sent out a tweet offering to send an offensive postcard to the first person who replied (he’s an avid collector of vintage postcards, from ones featuring oddly mundane shots of motorways and shipping containers to lenticular designs and pictures of animals).

The lucky winner was Jonathan Hopkins from Forest Hill, who received a card with the message “Fuck you Jonathan. Fuck you and your shit legs” alongside a drawing of said legs. Mr Bingo posted a photo of the postcard on Twitter and Instagram and it became an instant hit. “The internet loved it,” he told the audience at Offset.

A few days later, he set up a service offering to send postal abuse to anyone who was willing to pay. “It was sort of just for fun, to see if people would do it, and they did,” he explained.

Mr Bingo sent 1,083 postcards to customers before shutting down the site when he could no longer keep up with demand. Custom messages ranged from regional insults (‘Cardiff is shit’, accompanied by a drawing of the town at the end of a messy night) to obscenities written in elegant type and sketches mocking recipients’ online dating profiles.

“It’s a tough brief I’ve given myself, slagging people off in as many ways as possible,” he said. After devising a few hundred tailor-made insults, his ideas became increasingly abstract and obscure.

Part art project, part social experiment, Hate Mail taps into our love of a good put down and the dark thoughts most of us have had at some point but would never say out loud. His designs appeal to his customers’ sadomasochistic desires while giving them a custom artwork they can proudly display on social media. Insults are hurtful and often crushingly personal – but Mr Bingo insists it’s just a bit of fun.

“People would talk to me about this and ask, ‘What’s wrong with you? Are you angry, upset? Did you have a difficult childhood?’ I’d say, ‘it’s just funny’ … I don’t really mean any of this,” he explained. Some designs are inspired by real life experiences or frustrations, however – such as a sketch mocking a grown man riding a scooter to work or a portrait of Mr Bingo trapped in a boring conversation at the pub. “A lot of that stuff’s true, it’s just things I don’t say to real people … I can tell a stranger on a postcard and I have this cathartic release. It’s like therapy,” he joked.

After the project was featured in galleries, design press and mainstream media, Mr Bingo decided to publish a book compiling his offensive artwork. While he could have gone a commercial publisher, he decided to raise funds for the definitive collection of Hate Mail via Kickstarter so he could make the book the way he wanted and without skimping on production costs. The finished publication, priced at £15, was designed by art director and publisher Darren Wall, printed on German book paper and packaged in a clothbound, foil stamped cover. “A normal publisher wouldn’t have done that, they would have cut costs,” added Mr Bingo. 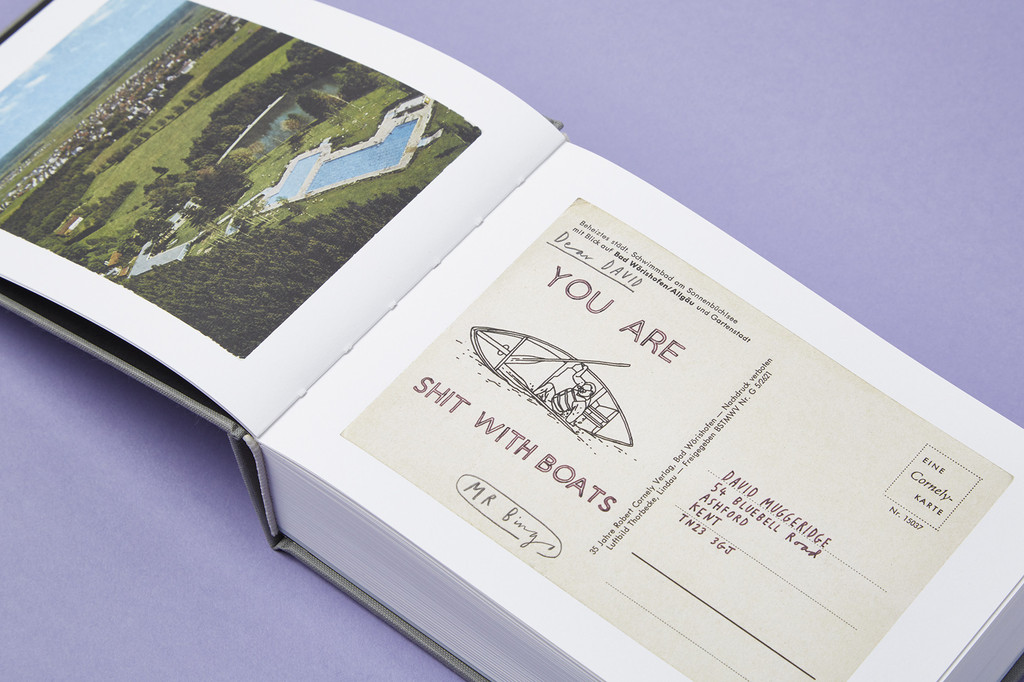 Shot in a series of “grimey” locations (including a tire yard and a block of artist’s studios resembling a housing estate) the film featured Mr Bingo rapping about Hate Mail while wearing a t-shirt printed with an image of his own face. Reminiscent of parody promos and the kind of music videos uploaded by suburban teens desperate to achieve hip hop fame (albeit with much slicker production values) the film features all of the essential components of a Kickstarter ad – it introduces the project, the book’s specifications and even offers a brief history of the Royal Mail – but delivered in an irreverent style that perfectly captures Mr Bingo’s sense of humour. 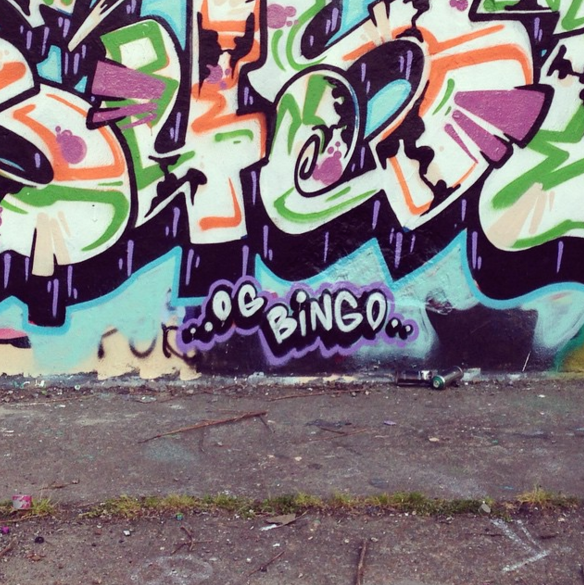 One of the shoot locations for Mr Bingo’s rap video. The illustrator cycled all over London to find suitably “grimey” settings. Image via @mr_bingstagram 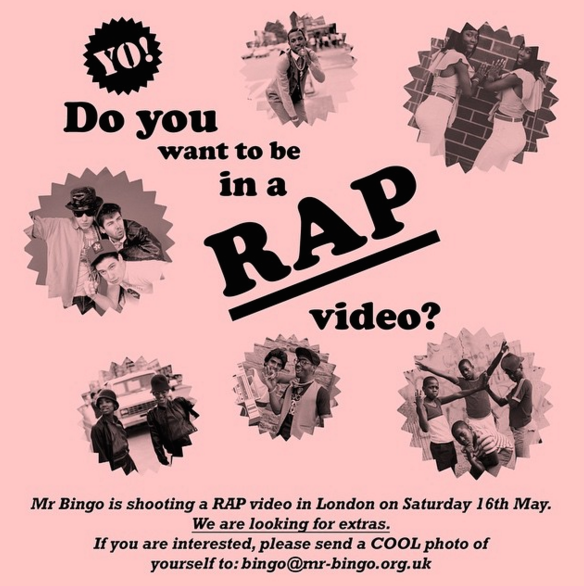 Mr Bingo spent months planning and choreographic the video: after finding the perfect beat online (and getting permission to use it), he spent two weeks devising rap lyrics with the help of a rhyming dictionary. “I thought it’d only take about a day,” he said. He recorded the track at a home studio, cycled all over London to find suitable locations and postboxes and recruited friends at production company Oldie to shoot and edit the video.

He also recruited helpers for the shoot day via Twitter and, after unsuccessfully trying to recruit extras online (he wanted to find teenagers who could exude “a bit of arrogance and aggression” and some hip-hop swagger), persuaded a 17-year-old rapper he had seen perform at an open mic night to appear in the film with his friends. He even managed to source a postman’s outfit for scenes where he is pictured delivering mail – a surprisingly difficult task given that impersonating one is an offence in the UK.

Once the video was complete and the campaign ready to launch, Mr Bingo devised a suitably weird array of rewards for backers. He looked at other publishing projects, which usually offer signed editions of books and experiential rewards like a meeting with the author – “and I multiplied that by a million,” he said.

Rewards ranged from being trolled online for a week (Mr Bingo would leave custom abuse in response to backers’ Twitter and Facebook updates) to illustrated envelopes featuring obscene drawings of The Queen using a postage stamp as her head and the chance to get pissed on a train with Mr Bingo and a group of strangers. The only reward which didn’t sell out was the offer of his friendship for a year – something he’s quite relieved about as he admits “it would have been a bit weird.” He also offered a range of physical products to suit various budgets, from standard copies of the book to signed editions and screen prints. (Backers could pay a little extra to receive their own piece of Hate Mail or an abusive Christmas card and phone call). Devising and producing rewards was a huge amount of work and Mr Bingo says each one “was like a mini art project.”

The project reached its £35,000 funding target within nine hours but even after this had been reached, Mr Bingo kept up momentum by posting regular updates and messages on Twitter and Instagram, encouraging people to visit the page and support the project (Instagram posts used stills from the shoot, such as a shot of Mr Bingo in said postman’s outfit, with messages directing people to the campaign page). By the time the funding period ended less than a month later, he had raised more than £135,000. 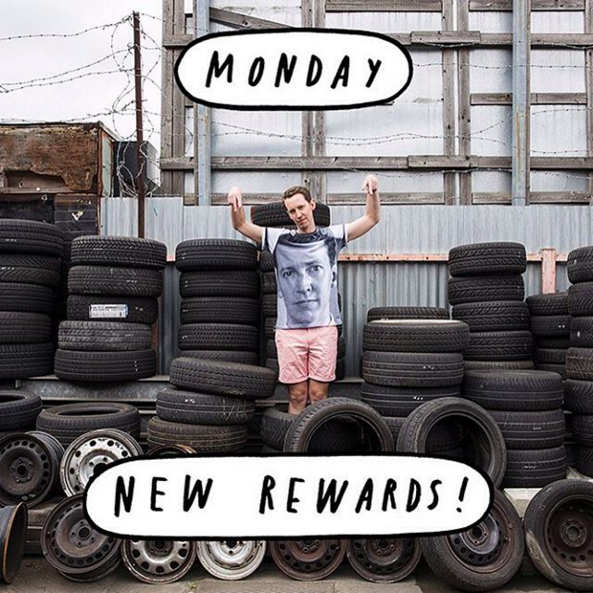 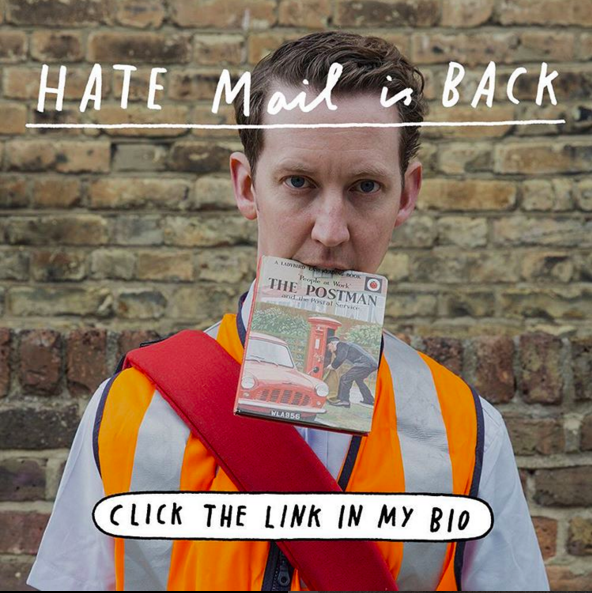 Mr Bingo used his Instagram account, which has over 25,000 followers, to build momentum for the Kickstarter campaign

Most of this money was spent on producing and shipping the book, making rewards and paying some of the people involved in making the video. Mr Bingo also donated some of the proceeds to charity, doubled the book’s print run and added a foil stamped book mark (pictured below) as an extra thank you to investors. In the end, he didn’t make much profit but as he points out, “I got to make a lovely book I’m really proud of with other people’s money.”

Whether you like or loathe Hate Mail, the Kickstarter project is a great example of how to do a crowdfunding campaign – and highlights the time, creativity and hard work that goes into convincing people to back an idea on the platform.

Speaking about what he’s learned from the project, he said: “If you think you can do better than what’s out there, it’s worth having a go. I looked at book projects and Kickstarter and thought, I can do a better version … so if there’s something you’re dissatisfied with, whatever it is, have a go. You probably can

[do a better version] and it’s worth it.” He also said he had learned the value of working with others – something he wasn’t previously used to doing as a freelance illustrator. “I’ve always been quite a loner … but working with other people is amazing, you can make things you never ever thought you could,” he said. 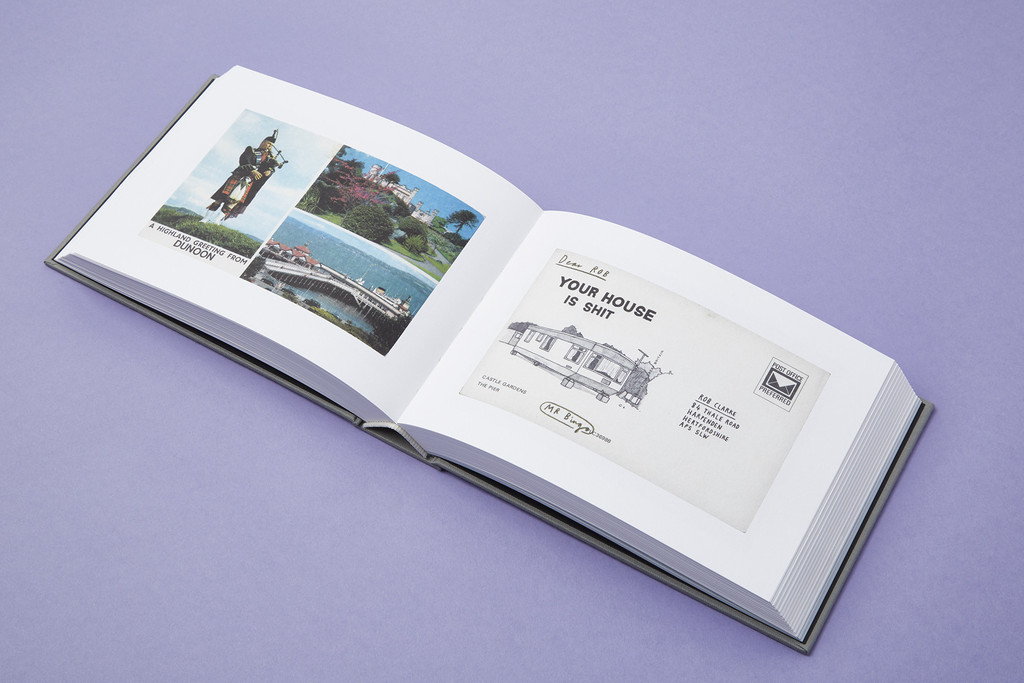 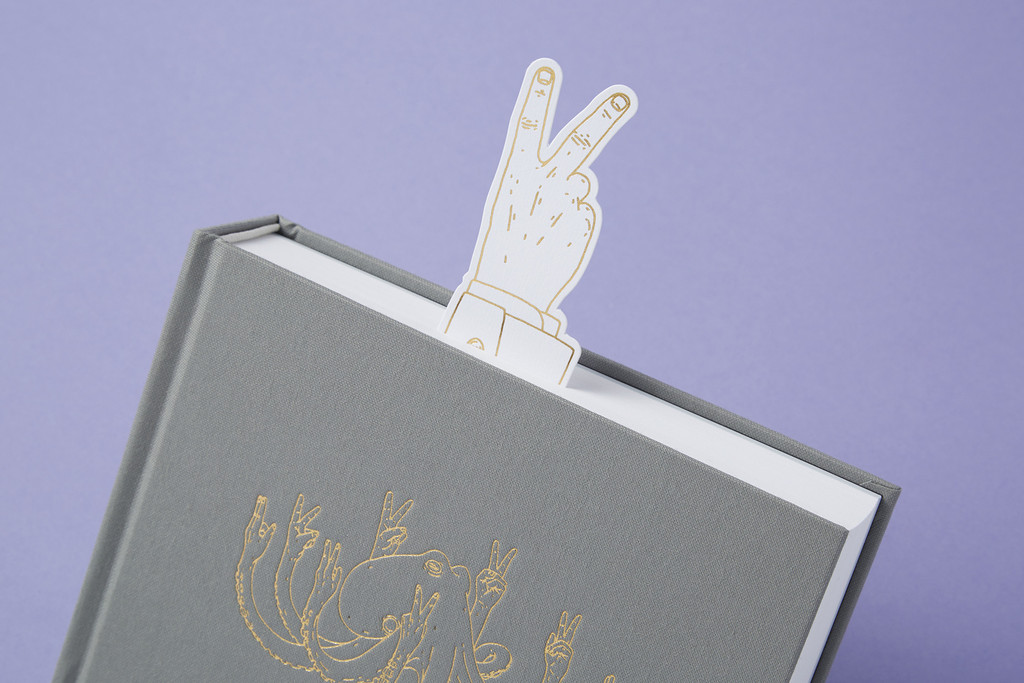 Since publishing the book, Mr Bingo said he is constantly asked what his next project will be – “and I have no idea, I haven’t got one to be honest,” he said. For now, he plans to hire a camper van and tour the UK while working on some new ideas. He did say that he wants to continue making art for people and not companies. “I really like art that interacts with people…. I love twitter and social media and interacting with online audiences and making art out of it,” he said.

Mr Bingo was speaking at creative festival Offset in Dublin. For details see iloveoffset.com. You can see Mr Bingo’s campaign on Kickstarter here.