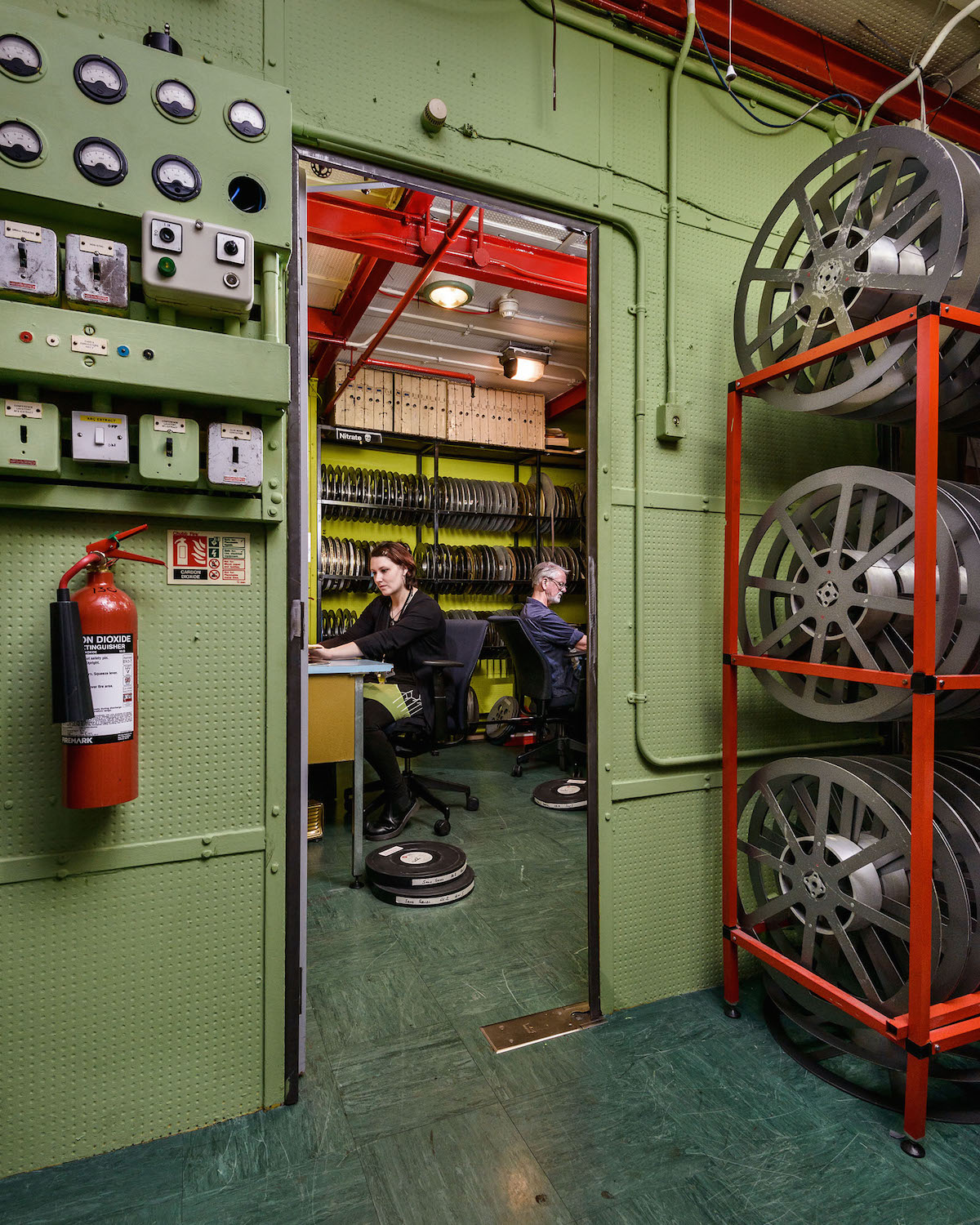 Cinema Paradiso captured it perfectly: there is something utterly magical about the moment a film is projected in front of an audience. Yet for those that do this job in cinemas today, it is an everyday task, and one that is rarely revealed to the public. For ‘The Projectionists’, Richard Nicholson gained access to the ‘sacred spaces’ of cinema projection boxes across the UK, to photograph the characters that work there, and in turn capture a moment of transition in the industry as it turns away from film towards digital. The series of work will be displayed as part of the Flatpack Film Festival, which takes place in Birmingham later this week.

The project was inspired in part by Nicholson’s childhood in the 1970s and specifically his father, who was a keen amateur photographer and filmmaker. “He built a home darkroom and taught me how to process and print black and white film,” he says. “On Sunday evenings he screened his Super8 home movies – that’s where my interest comes from.

“Since 2006 I’ve been working on a long term project about the demise of the professional photographic darkroom. This was exhibited at Riflemaker, London, and seen by Professor Charlotte Brunsdon, who runs the Projection Project, a research group at the University of Warwick that studies the history of film projection in the UK. She invited me to join the project. I was hesitant as first, as I don’t necessarily want to be known as the ‘analogue guy’. But after meeting some film projectionists and doing some test shoots, I realised that this was an opportunity to develop the ideas that had inspired my darkroom project.” 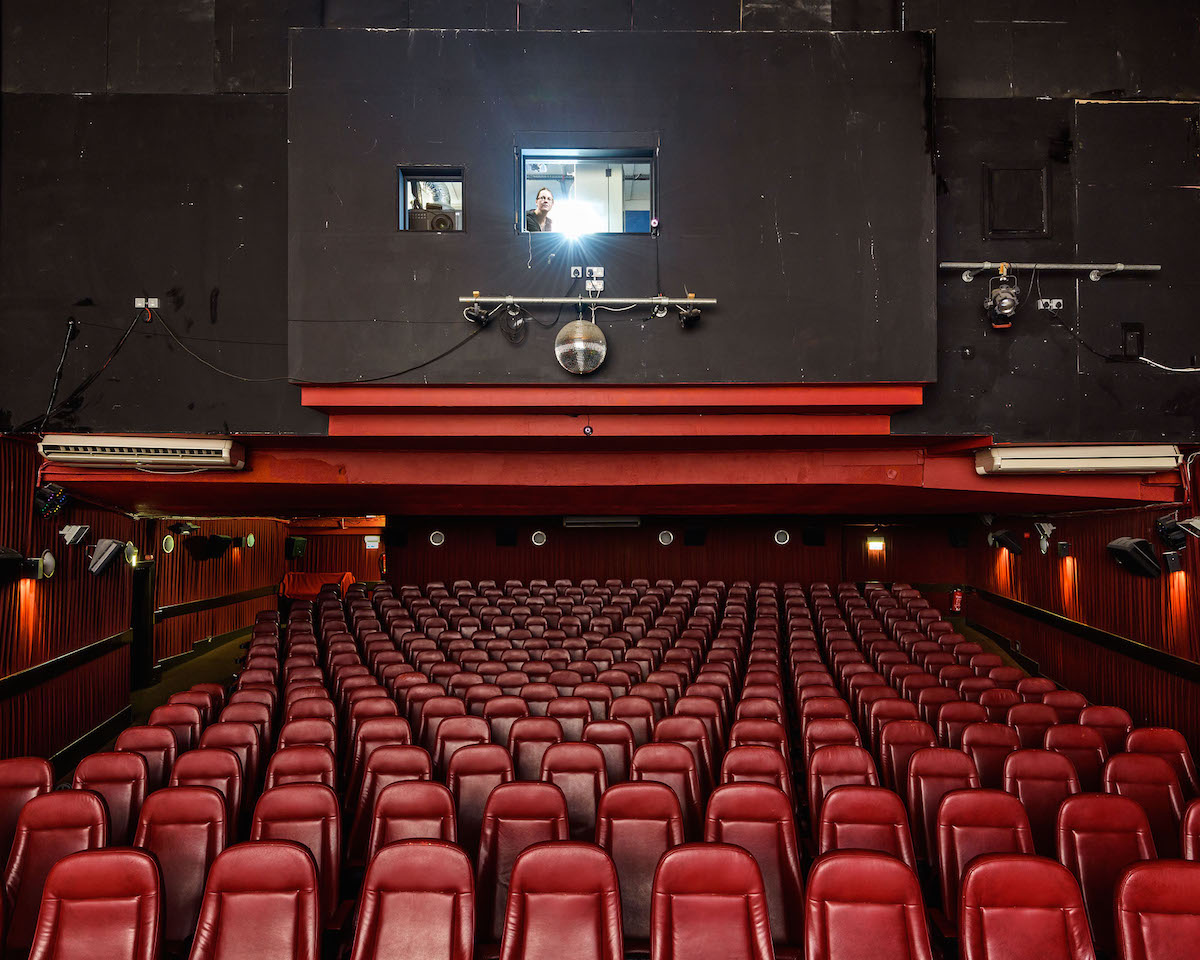 Nicholson was surprised by the physicality of the projection box when he first visited one. “I was struck by the claustrophobic atmosphere,” he says. “It was a dark, cramped space, and, as the projector whirred into motion, it became increasingly hot and noisy…. As I watched the projectionist wrestle with a giant spool of film, the scene reminded me of a railwayman shovelling coal into a locomotive. Other projection rooms looked like the cockpits of 1950s sci-fi spaceships, or the engine rooms of submarines.”

Ironically, despite the focus on analgoue in the series, Nicholson was forced to shoot it using a digital camera in order to capture the spaces and the individuals working in them. “With digital I can get sufficient depth-of-field using small battery-powered lights, whereas with film I would need large mains-powered flash-heads which would have been impossible to place in such cramped surroundings,” he explains. 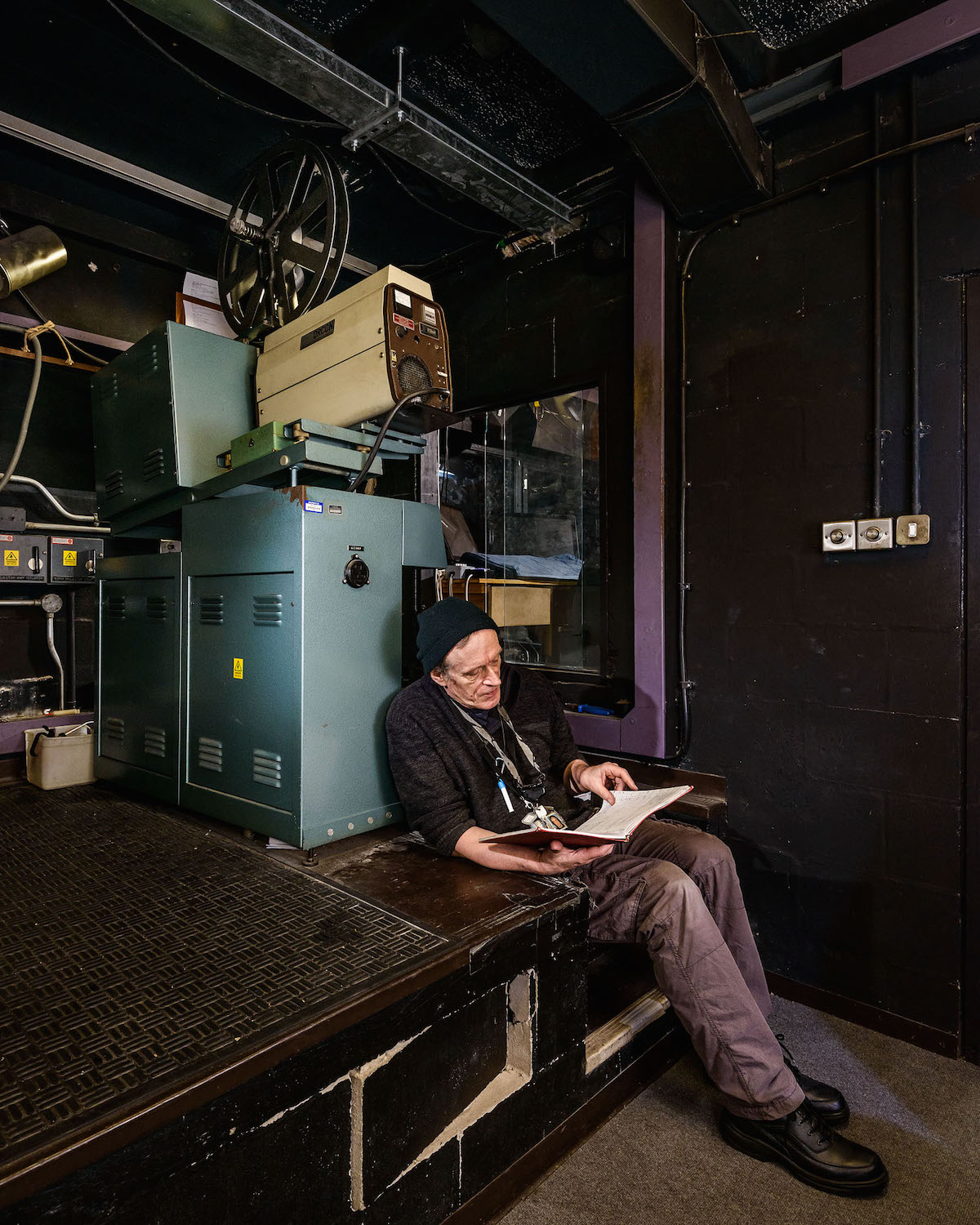 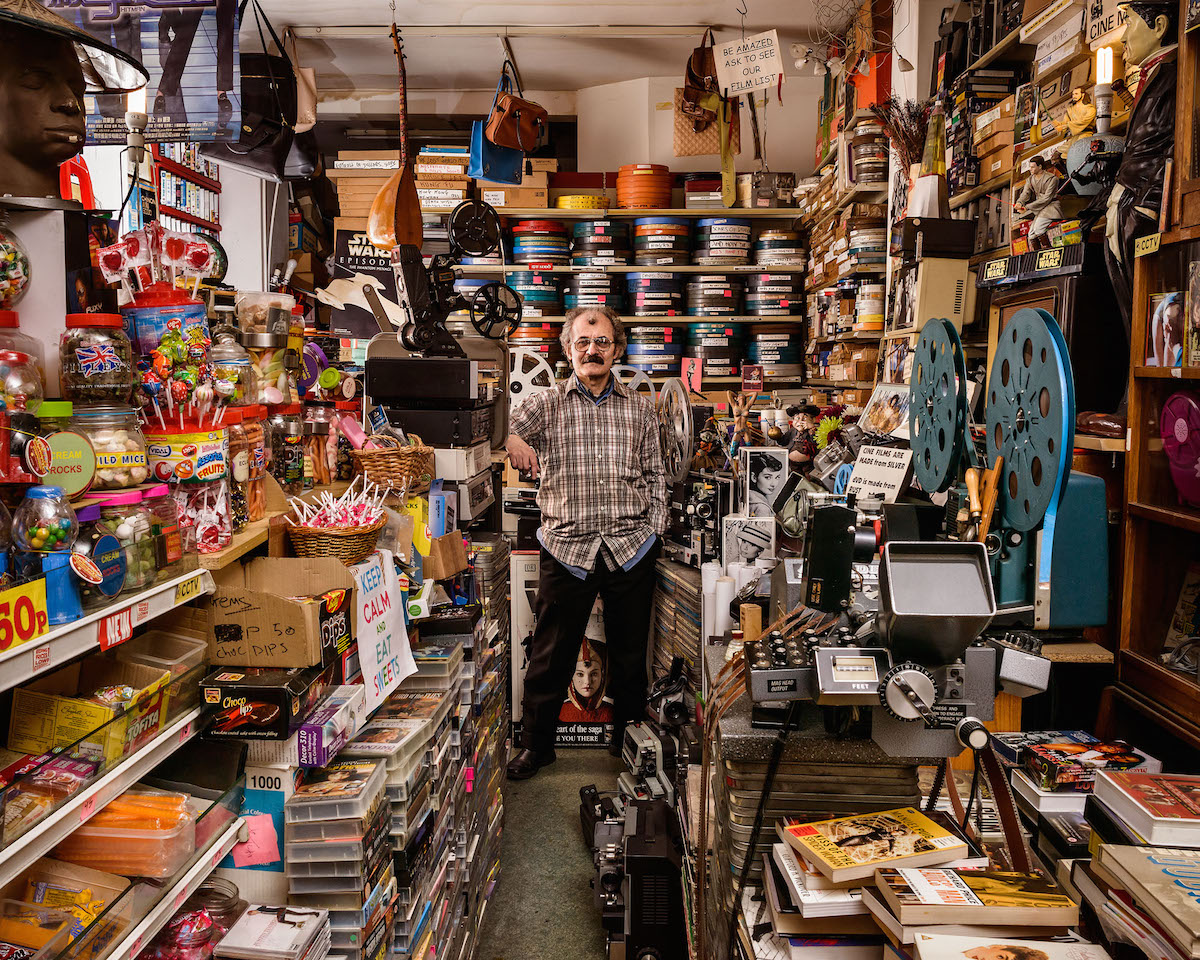 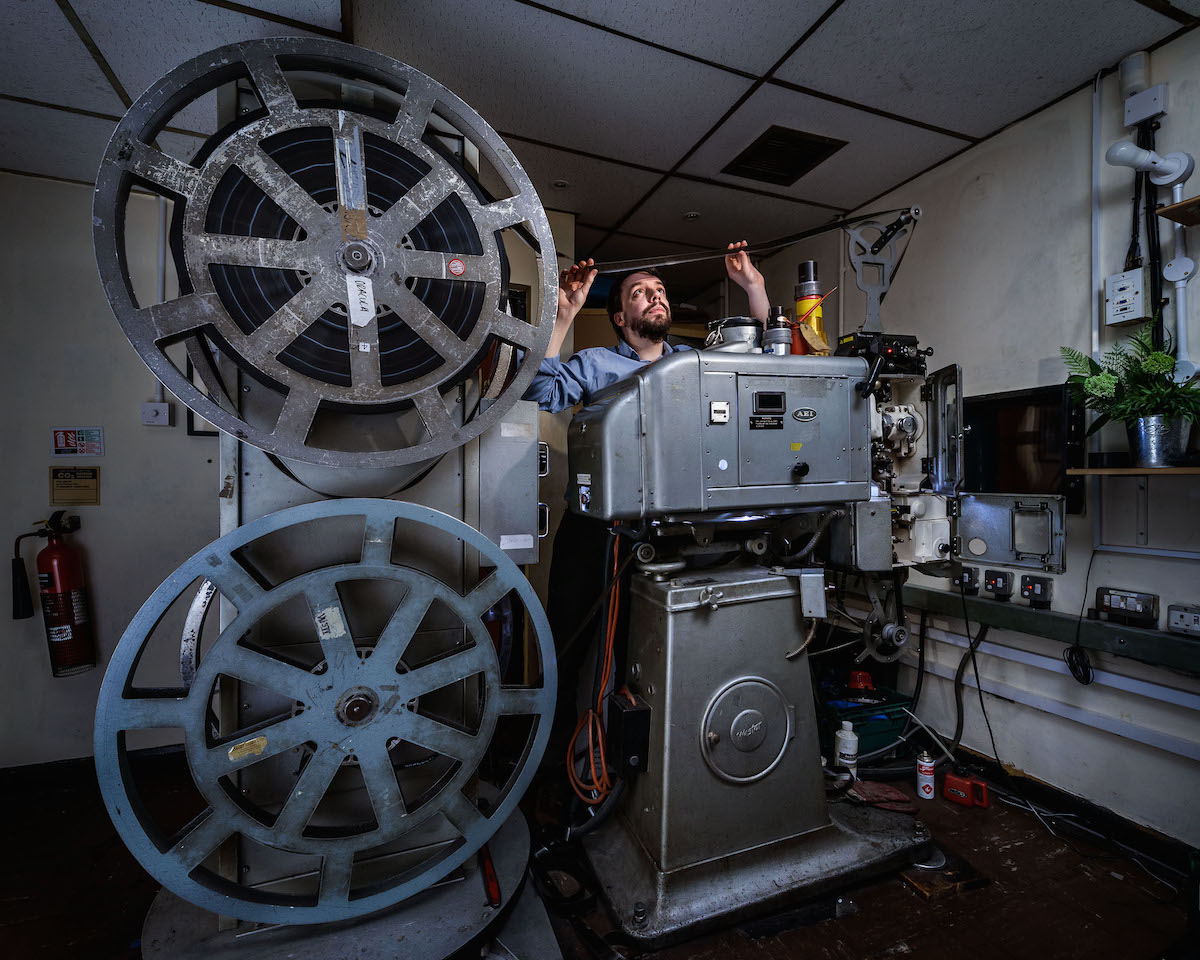 Despite the tendency to romanticise film, Nicholson remarks that it’s not all doom and gloom with the move to digital, though there are elements of life that are fundamentally lost along the way. “Most of the projectionists I’ve met are surprisingly positive about digital projection,” he says. “In general, they believe that digital provides a better experience for the viewer – less jitter, and no dust or scratches. And if they can hold on to their jobs, the work of a digital projectionist is much less demanding than that of a film projectionist.

“But what really interests me is the transition from analogue to digital in a more general way,” he continues. “Most crafts have been fundamentally altered by digital. Where once each craft had its own workspace and its own set of tools, now everything is homogenised by the computer. Of course it’s wonderful that a laptop can serve duty as a darkroom, a music studio, an editing suite etc. But I’m interested in what we’ve lost in this transition. It seems we are much less physically embodied in our work. We no longer have a concrete relationship with physical objects. It’s an idealist’s fantasy.”

Of the projectionists themselves, Nicholson comments that they are “unusual characters”. “It’s a solitary job, with antisocial working hours. Some are in it for a love of the machinery, others for a love of the movies. As a photographer, I can relate to it. I wouldn’t mind being a film projectionist myself – beaming fantasies into people’s heads.”

The Projectionists is on display as part of the Flatpack Festival, which takes place in Birmingham from April 20-24. More info is at flatpackfestival.org.uk.

Read more here:: Richard Nicholson captures the romance of the cinema projectionist in a new series of photographs