Robin Day: a look at the designer’s graphics and works in wood 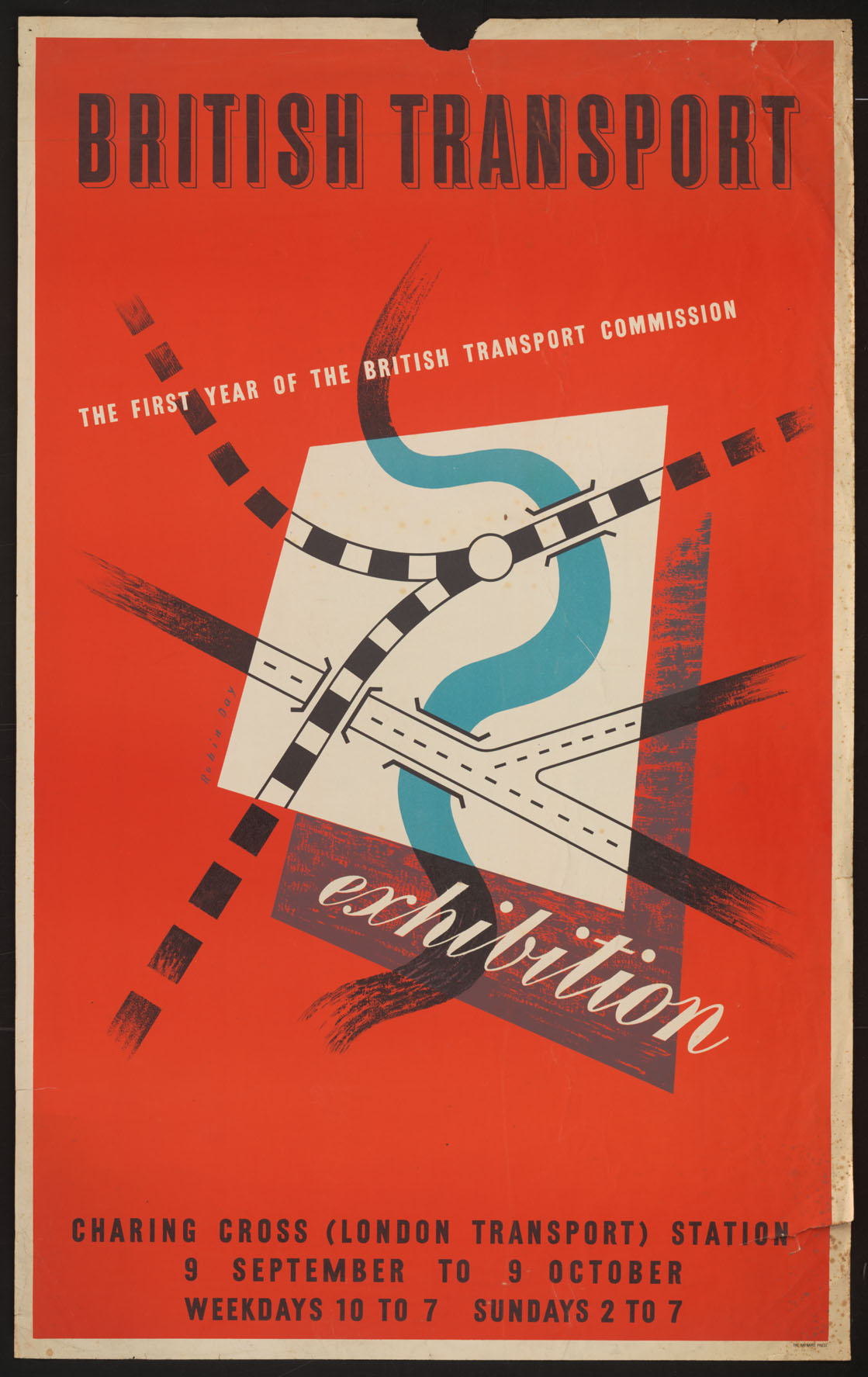 Robin and Lucienne Day were two of the 20th century’s most pioneering and successful designers. Robin worked on exhibition design, graphics and interiors as well as iconic furniture designs for Hille (including his famous polypropylene and plywood chairs), while Lucienne’s abstract patterns appeared on textiles in millions of homes across the country.

To celebrate the centenary of Robin Day’s birth, the Foundation has organised a number of events to coincide with this year’s London Design Festival. The V&A is showcasing his works in wood in an exhibition designed by Assemble, on display until October 4, while John Lewis has devoted a section of its Oxford Street store to Robin Day’s designs. Licensee Case Furniture is also hosting a small exhibition of Day pieces donated by private collectors.

To highlight Day’s achievements in graphic design (a less talked about aspect of his career), the V&A Museum has photographed a selection of his posters, which he donated to the Museum in 2000. We have five to show here, including recruitment posters for the RAF and designs for the British Transport Commission. We also spoke to Paula Day about her father’s graphics and the V&A’s new show, as well as how the Foundation is working with leading museums to preserve and Robin and Lucienne’s work.

Poster for an exhibition marking the first year of the British Transport Commission. Image courtesy of the V&A Museum & the Robin & Lucienne Day Foundation

CR: Could you tell us a little more about your father’s graphic design work?

PD: My father wasn’t formally trained in graphics but from an early age he had a gift for drawing – I’ve got a marvellous notebook full of cops-and-robbers cartoon stories he did as a boy! And he did watercolour landscape sketches and so on as a teenager in High Wycombe.

He must have taught himself the necessary typographic skills, perhaps when he was studying at the RCA in 1934 – 38. I remember him saying that he’d done some signwriting – probably when he was a student and then during the War, when he was making a living on part-time teaching and whatever freelance work he could get.

The first graphics commission on record is his poster for the Ministry of Supply ‘Jet’ exhibition, which he co-designed with the architect Peter Moro in 1946. Peter Moro invited him to design a number of exhibitions with him – my father would do the typography and display panels.

Day designed several recruitment posters for the RAF between 1946 and 1948. Image courtesy of the V&A Museum & The Robin & Lucienne Day Foundation

Apparently the Central Office of Information recognized his talent and he was commissioned to design the seven RAF Recruitment posters, which were displayed on hoardings across the country from 1946 – 48. After that he designed posters for The Royal Society for the Prevention of Accidents, a British Transport Exhibition, a Building Science Exhibition, a Festival of Britain Science Exhibition, as well as book and magazine covers. And of course he did some of the signage for the Festival of Britain.

In 1949 he began his collaboration with the British furniture company Hille. He began by designing the distinctive Hille logo, and during the 1950s I believe he designed all the leaflets and publicity material for the company. All through the 1950s and 1960s he produced highly accomplished presentation drawings of interiors for clients such as BOAC and John Lewis – and of course he designed many of the family’s Christmas cards!

His graphics work isn’t as well known or widely discussed as his achievements in furniture design – why is this?

Presumably people have been most interested in his furniture designs because so many of them are still in production and still being used. Perhaps the time has now come for his whole immense design oeuvre to be reassessed. For example, between 1946 and the early 1960s he designed dozens of outstanding exhibitions. In 1959 he was appointed a Royal Designer for Industry on the strength of his exhibition design as well as his furniture. 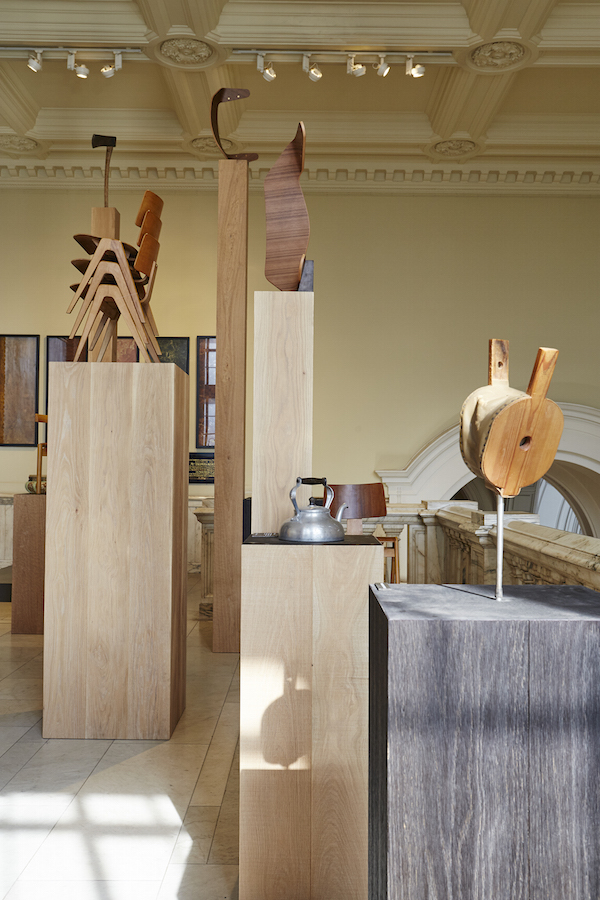 You’re also celebrating his centenary with Works in Wood at the London Design Festival, which you describe as a much neglected aspect of his work. Why did you want to put on the exhibition?

We wanted to put on a really interesting LDF at V&A installation, which would tell a different story from the familiar one about my father’s pioneering Polypropylene chair design. The Curator, Jane Withers, suggested we explore his designs in wood, and asked me if he had ever made things at home in wood. I almost bit her hand off as my father spent most weekends at our cottage in the oakwoods of West Sussex, logging for the woodburning stove and making all sorts of things out of wood just for pleasure. This was just as much part of his creative life as his professional design work – there’s a lovely sketchbook page with drawings for chairs mixed up with drawings for the garden birdtable he made, which is now on top of a plinth in the exhibition!

Jane suggested we invite Assemble to design the installation. With their environmental concerns and interest in hands-on making I think they were able to create an installation in close sympathy with my father’s own practise. 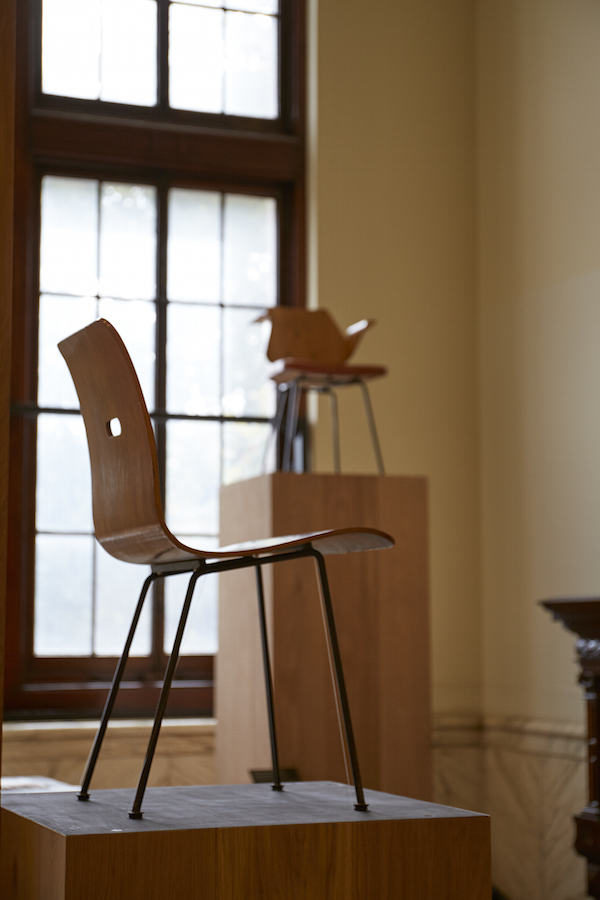 You’ve spent three years running the Robin & Lucienne Day Foundation. Why did you decide to set it up?

After my parents died I gradually realised that ultimately I was the person responsible for looking after their design legacies. I discovered some shocking abuses – one company, Loft Furniture, had even registered the company name Robin Day Ltd and tried to register the trademark Robin Day without asking permission from his estate!

One way or another, my parents’ work was beginning to be diluted and adulterated, and I simply could not allow this to continue. What was at stake was my parents’ life’s work, which is part of the nation’s artistic heritage. 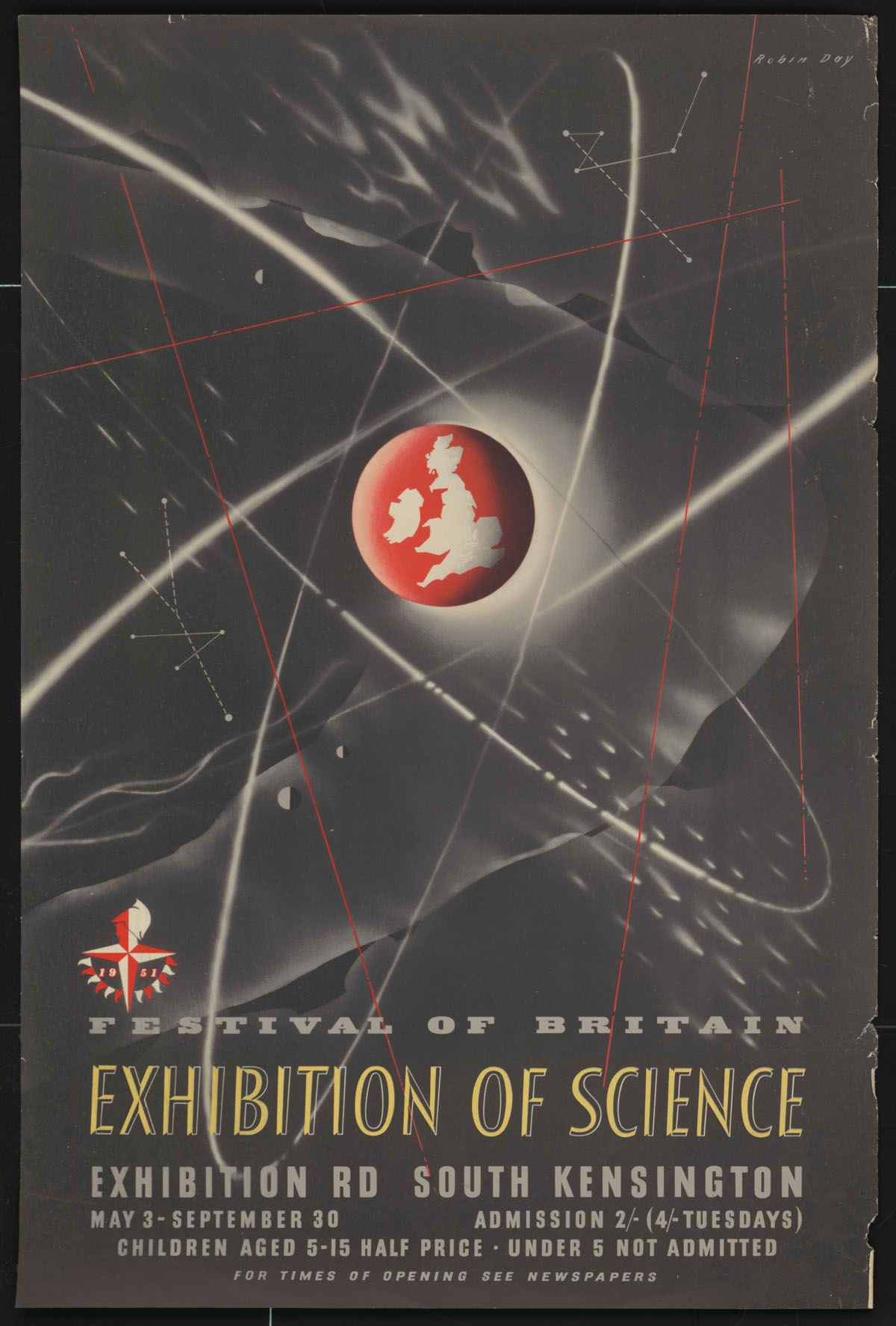 Poster by Day for an exhibition of science at the Festival of Britain, 1951. Image courtesy of the V&A Museum & The Robin & Lucienne Day Foundation

I realised that I was going to need skilled professional support to do this. So with the help of my co-Trustees, I set up the Foundation, which is a design education charity dedicated to further public knowledge of and access to my parents’ design legacies, and providing resources for the study of design.

You now work with a small number of licensees (Hille, Case Furniture, Classic Textiles, John Lewis, Magis & twentytwentyone). How do you go about choosing which brands to partner with and how much control do you have over reproductions? 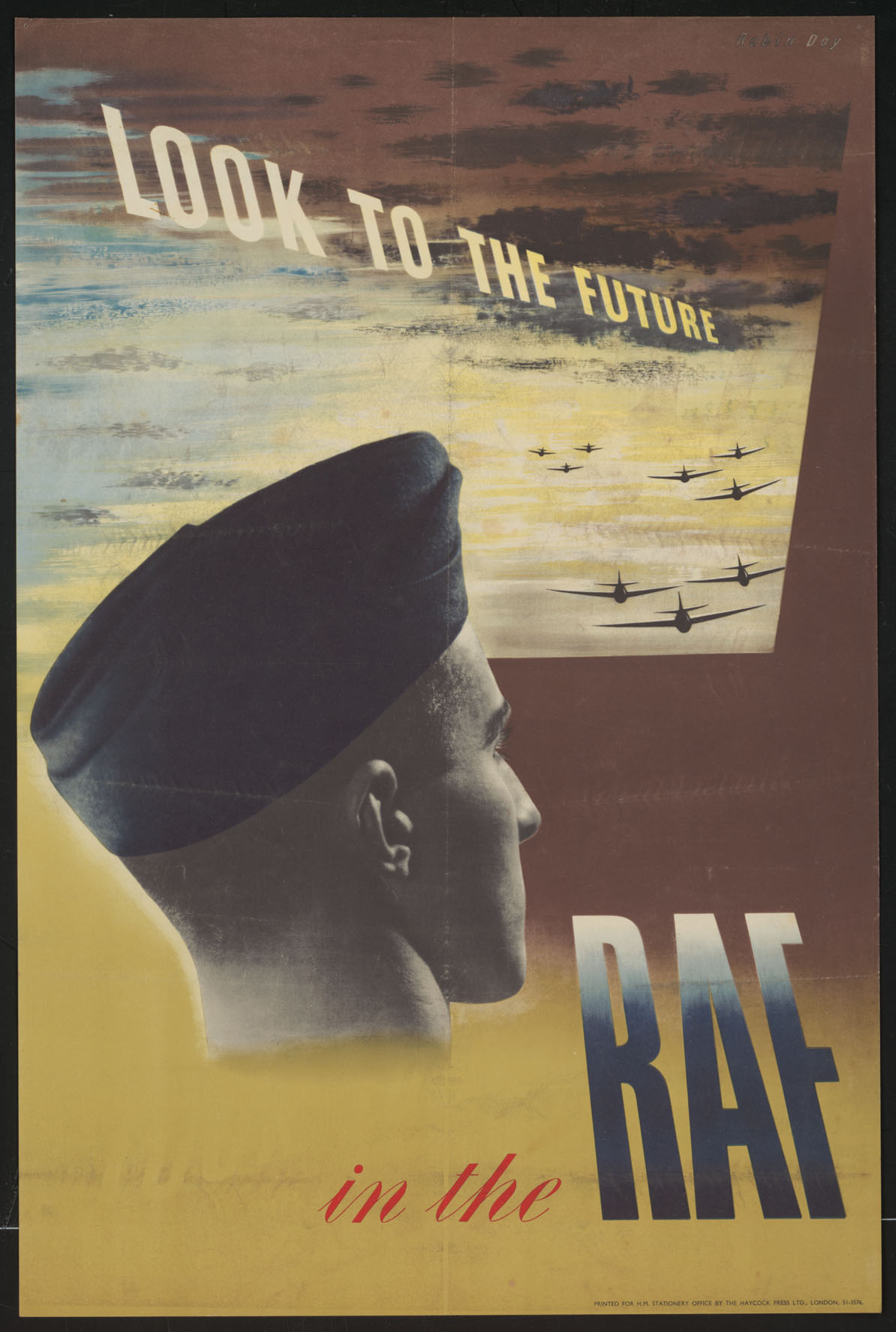 Another of Day’s posters for the RAF, created in the 1940s. Image courtesy of the V&A Museum and the Robin & Lucienne Day Foundation

You’ve also worked closely with museums including the V&A and London’s Design Museum. How are they helping you protect your parents’ designs?

Both my parents gave extensive material to the V&A archives, and the Foundation followed this up with the gift of all my father’s technical drawings. The V&A archivist Christopher Marsden has been extraordinarily helpful in working with the Foundation to make these available to the public for legitimate use, while keeping a weather eye out for possible exploitation.

Following on from the Whitworth’s 1963 ‘Lucienne Day: A Career in Design’ exhibition, my mother gave much of her textile archive to the Museum. They kindly made this available for study and careful reproduction of her 1954 Cavendish Textiles dress fabrics, which were re-issued by John Lewis last year.

We have given the Design Museum the complete contents of my father’s last studio to display on their new site next year. This will give design students a unique glimpse of my father’s working practise. 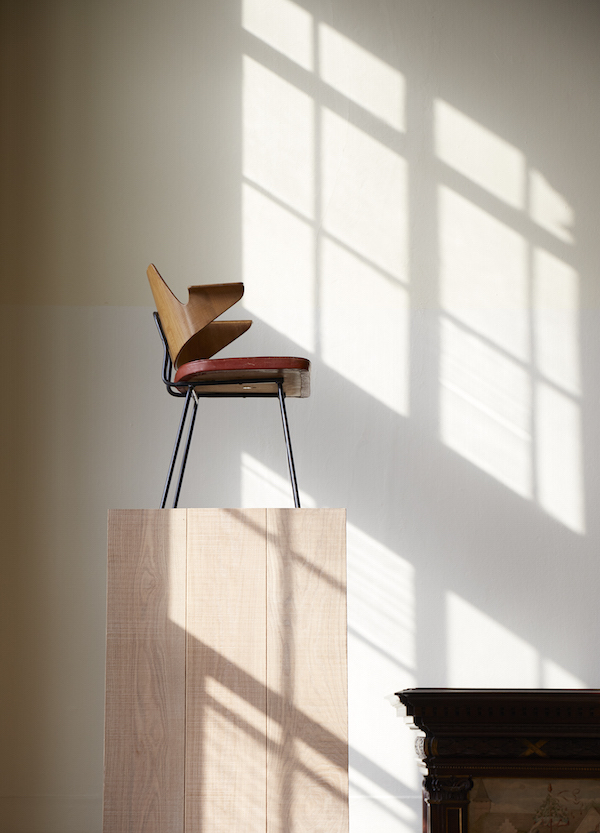 And one of the foundation’s objectives is to help students further their design studies. Could you tell us a little more about the Foundation’s work in education?

We initiated our Awards Programme this year. We celebrated my father’ s centenary with 100 schools book prizes for GCSE Design and Technology students. And we gave the Robin and Lucienne Day Prize for Ethical and Sustainable Design to a final year RCA Printed Textiles student, Lucy Rainbow, for her hemp hospital workwear designed to enhance quality of life for the terminally ill and their carers. We’ll be developing the Awards Programme over the next few years.

This must be a huge responsibility…

To be quite honest, it has taken over my life. My parents would not have wished this on me. But the interest in their work is growing exponentially – this is great, but it definitely needs to be managed in the interests of their design legacies and the nation’s long-term cultural heritage.

Robin Day Works in Wood is open at the V&A Museum until October 4. For details see londondesignfestival.com

Lead image: Poster for the Royal Society for the Prevention of Accidents

Read more here:: Robin Day: a look at the designer’s graphics and works in wood