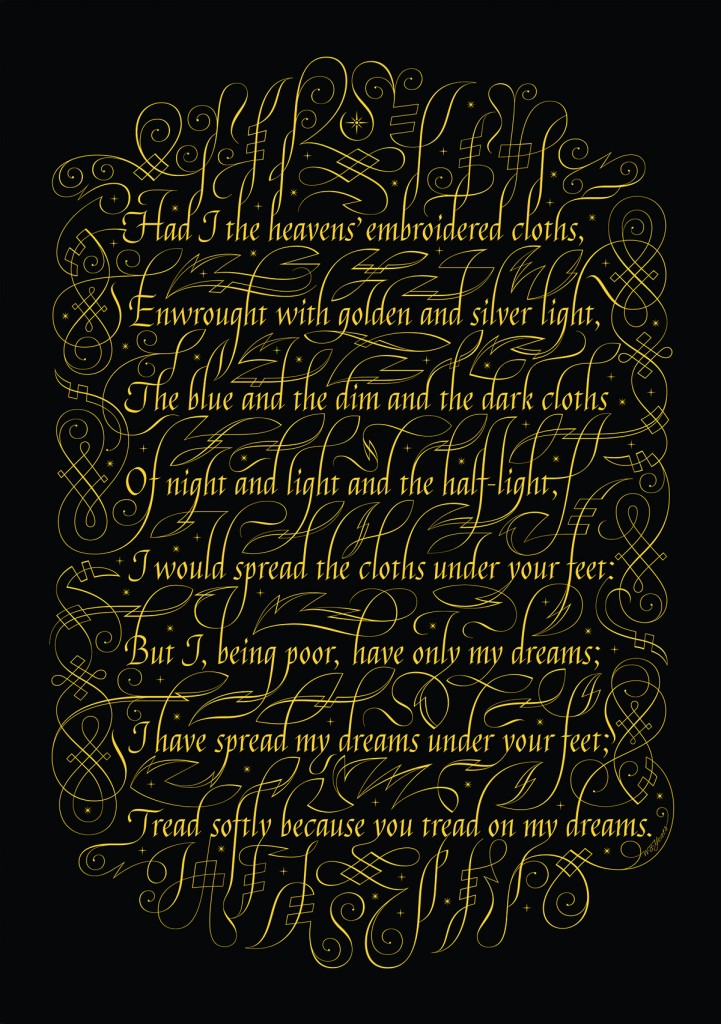 Last month, artist and designer Seb Lester gained his one millionth follower on Instagram. “It’s a respectable following for a pop star,” he wrote on his website at the time, “let alone a nerd with a lot of pens”. Lester first posted images of his work to the platform at the end of 2013. His inaugural photo, a snap of some hand-drawn lettering and a handful of quills, offered a glimpse of what might be to come. But it was Lester’s idea to post short film clips of himself working that very quickly established him as a star of social media. His Instagram account is ranked 1,940th in the world in terms of followers and his Facebook page has over 500,000 likes. His Vimeo film Sketchbook: February 2013, meanwhile, for which Lester set up a camera and filmed himself writing out ‘A’ to ‘M’ in Blackletter, has now been viewed 1.3m times.

Cloths of Heaven, Lester’s interpretation of WB Yeats’ poem ‘Aedh wishes for the cloths of Heaven’. Lester produced an A2 limited edition screenprint (shown) and an embroidered piece with the London Embroidery Studio, available in an edition of five.

Let’s think about that again. This is a two-and-a-half-minute film of a man practicing Gothic calligraphy in his living room. It’s beautifully done, of course, and a compelling demonstration of artistic skill. But the stats took Lester by surprise as well. He wrote on Facebook: ‘It has been a strange few days. My new calligraphy video has had 333,000 views since Sunday. I’ve had three marriage proposals from complete strangers and a lady in Africa wants me to design a logo for her sex shop.’ “I get some really strange emails,” he tells me.

Lester’s Instagram now shows films of him drawing everything from looping calligraphic forms to blocky pop-culture logos and his blend of great penmanship and self-deprecating wit have meant that his work enjoys an audience from all over the world. (The photos of his ‘to-do’ lists, with things like “Receipts – tax shit” and “Follow up client project” written out in ornate script, are also particularly popular.) In response to his posts, fans often ask him to write out their name, draw their favourite band logo, or give advice on the best pen to use to make the Nike swoosh. Calligraphy and lettering might seem far removed from social media, but Lester has shown that – in the right hands – older artistic techniques can flourish on these platforms.

A graphic design graduate of Central Saint Martins, Lester has created both logos and custom type for a range of international clients and was at Monotype as a senior type designer for nearly a decade. He came quite late to calligraphy – he is 43 and first got serious about the artform five years ago. The social side of things simply evolved from his passion for the art. “I had become somewhat obsessed with calligraphy at this point and so it was inevitably going to start appearing on my social media,” he says. “I did want to share what I was doing because I found it all quite magical. I also thought it would be a good way to try to develop new skills and maintain some kind of online presence so that, when I was able to take on client work, I’d have more strings to my bow.”

The backstory to this, Lester explains, is that from January 2011, he was a full time carer for his partner, Pamela, who, while now in remission, was extremely unwell at the time. “I wasn’t able to work for over 14 months and the one creative outlet I had was calligraphy,” Lester recalls. “So these early calligraphic doodles were meditative, a form of stress relief, a form of escapism. I’m extremely grateful that I was able to turn such a bleak low point in our lives into something that has brought me so much joy and dramatically changed the trajectory of my career for the better. Anyone reading this experiencing similar life events should take heart in the fact that many clouds do indeed have silver linings,” he adds.

In a way, something of what Lester gained from writing out newly-learned letterforms is similar to what viewers take from watching him work. His films are often very short, mere seconds long, but it’s easy to sit and watch them again and again, such is their appeal. “The best response anyone can have to a post is ‘wow’,” he says. “Those posts get the best responses but are the hardest to achieve. I like to try and surprise people and I like trying to use humour in my work. Variety is important, albeit working within the constraints of the Latin alphabet.”

His films are also, immediately, human. There’s the scratch of the pen, or wet squeak of a marker – little elements that add to the idea that, as a viewer, you’re watching something being made by someone right in front of you. “There are always going to be imperfections in my work, no matter how many takes I do,” adds Lester. “The films are little performances. To keep them fluid they have to be performed quite quickly. If I only posted things I was happy with I’d never post anything. I work to a basic quality control level that something is not necessarily great but simply good enough to post. I honestly don’t have time to work any other way.”

BELOW: Lester has posted a wealth of short clips to Instagram and now has over 1m followers on the platform. From calligraphy to serif texts, film logos and celebratory messages, the films regularly receive tens of thousands of views. As well as varying the subject matter, Lester also changes the pens he uses. The ‘Hola’ text, for example, was created using a Trio pen he found in a toy shop 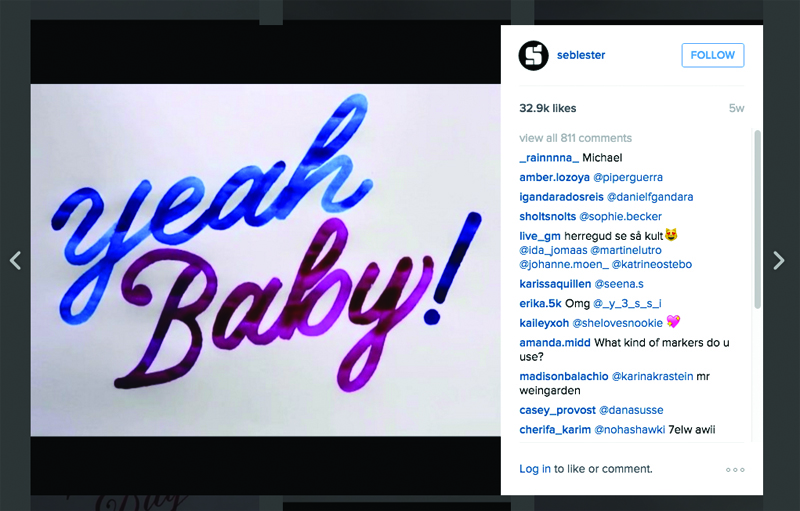 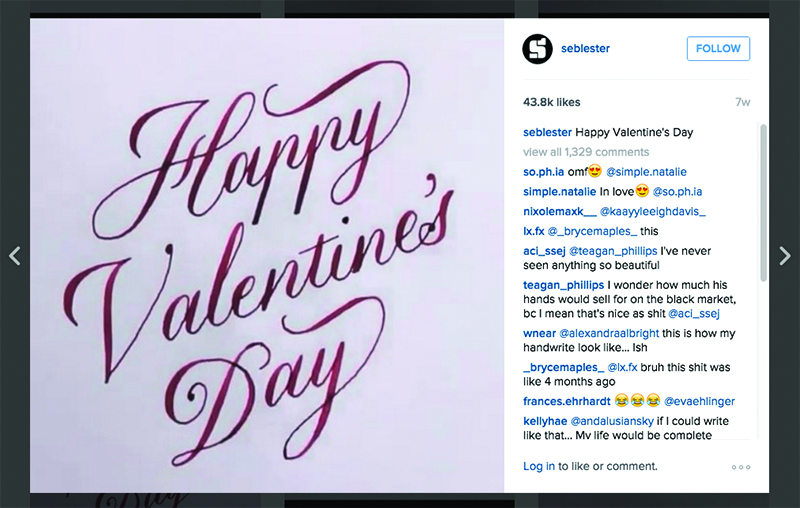 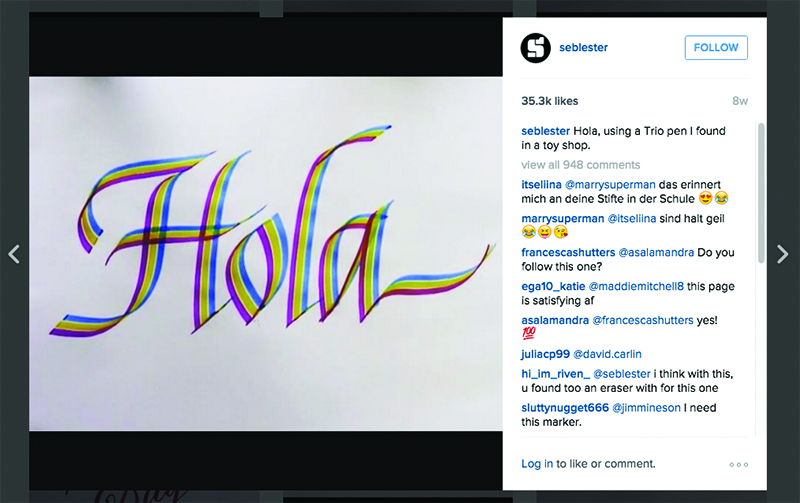 In June 2014, Instagram posted one of his clips to their own account and within two minutes it had caught the attention of 10,000 people who ‘liked’ it. A month later – symptomatic of the level of interest his work was starting to receive – Lester posted a note to the news section of his site in an attempt to address some of the questions commenters were posting with increasing regularity. He politely directed people to a ‘How to Get Started in Calligraphy’ page. At time of writing, Lester has 342,468 comments on his Instagram account alone – while close to two million accounts follow him across his various platforms. “The big thing I’ve learned about success on social media and elsewhere is that it very easily pulls you away completely from what made you successful in the first place,” he says. “You can end up spending all of your time doing all the things around what made you successful.” There’s a considerable administrative side to all this which, Lester explains, can mean there’s much less time for actual calligraphy. Yet his use of social media has undeniably brought his work – and lettering in general – to a wider audience. Last year, he was one of three calligraphers including Ian Barnard (@ianbarnard) and John Stevens (@calligraphile) interviewed by the BBC for a video feature on how “a new generation is using social media to keep the ancient, analogue art of calligraphy going strong in the digital world.” PBS NewsHour got in touch (here, Lester talked about calligraphy as entertainment or performance), while design writer Alexandra Lange profiled him and several others in ‘The Calligraphy Stars of Instagram’ for The New Yorker. This year, DW-TV, the German equivalent of the BBC World Service, also talked to him about calligraphy.

BELOW: Lester was asked to select some of his favourite Instagram clips for a compilation film that would accompany an interview he did with art blog booooooom.com. Entitled Best of Seb Lester’s Hand Drawn Calligraphy Videos, it has had 2.7m views on YouTube and over 100m views on Facebook “if you count all the freebooting,” he says.

But of more interest to Lester is the widening of the audience that gets to see his work online. “I think one of the biggest achievements of my career is to crossover in the way I have done,” he says. “Shaping behaviour, either through engagement or participation, in a positive and beneficial way is an amazing thing.” Five years ago, he says, most of the people interested in his work tended to come from the visual arts. While he’s certainly retained this audience, he’s now expanded way beyond it. “There’s a pet shop in Iran following me on Instagram,” he says, “teachers, soldiers, bus drivers, beauticians, academics, strippers. Followers range from eight to 80 years old and come from all over the world. There’s a kid in Mongolia trying to emulate my calligraphy videos. This is a kind of reach which was unimaginable until recently and it has been facilitated by social media. It is a surreal and beautiful thing.”

To people who can watch Lester via their computer screen or smartphone, the appeal of his films stems partly from a desire to see creative work being executed in real time. Similarly, our normal experience of the product of any artistic endeavour is likely to be with its finished state. Part of the attraction of Lester’s films is that they show a rare thing – the hand that makes the work. In the case of documenting calligraphy, they are also a window into a way of communicating that has been fading ever further away from us. Lester is bringing it right back into the digital age and it makes perfect sense that his skills would appeal directly to people looking at them through a screen. 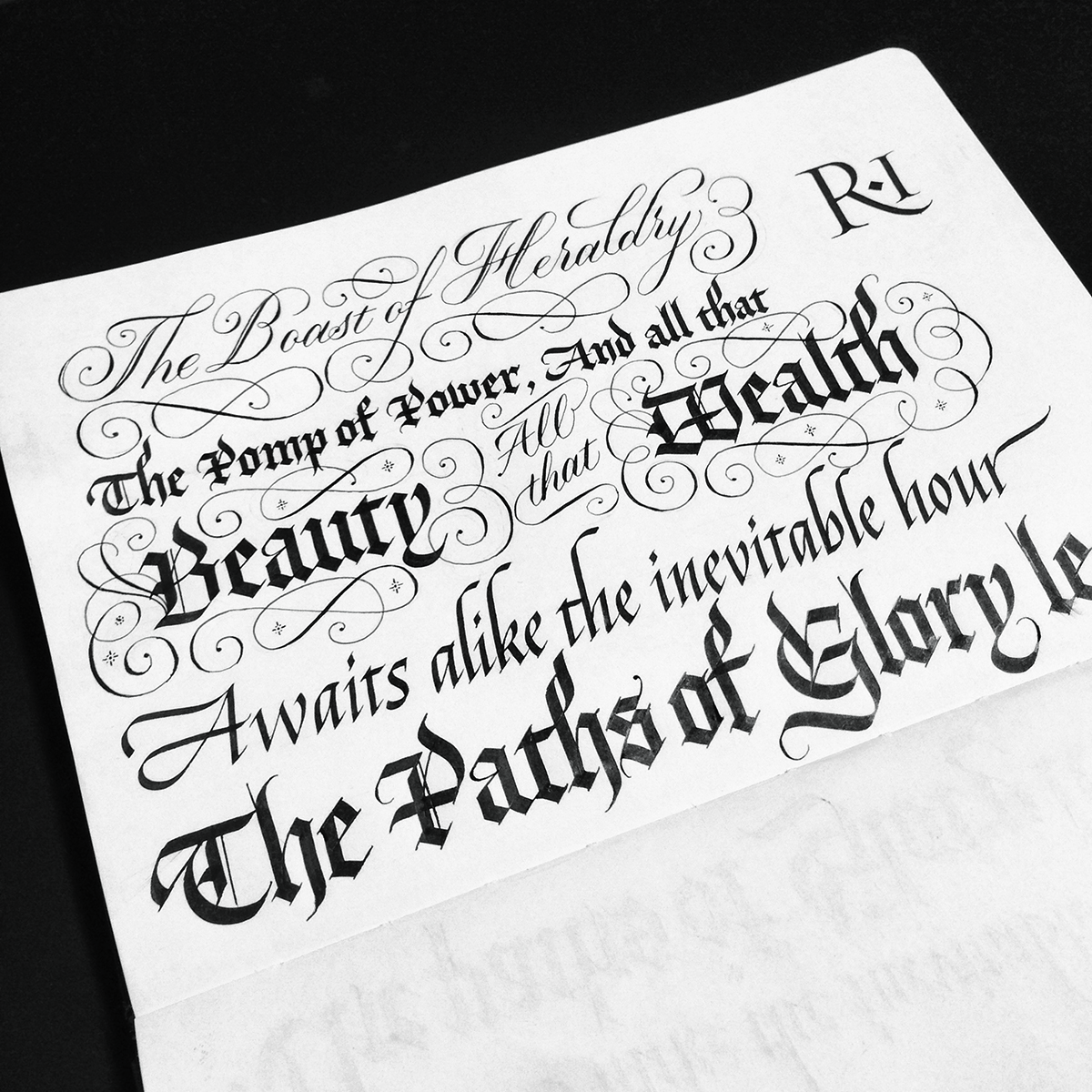 Page from one of Lester’s sketchbooks

For Lester, his social media is all part of being a working artist – it’s “a way to showcase my abilities as someone who works with letterforms. I’m also evangelising about the beauty of letterforms,” he says. “I want to play my part in keeping the ancient art of calligraphy alive and relevant, moving into the 21st-century. It wasn’t that long ago calligraphy almost disappeared completely and I don’t want that to happen again.”

BELOW: Not all Lester’s films show him working – this pan over a piece of paper reveals that it is, in fact, a shopping list written out in calligraphy

Are we perhaps witnessing its renaissance? Lester thinks so. “A lot of young people are interested again and they’re applying calligraphy in new contexts and often with a progressive, exploratory and sometimes irreverent attitude,” he says. “I see calligraphy influencing logo design, graphic design and graffiti at the moment – I find this renewed interest very exciting and I want to continue to help nurture this revival of interest in handlettering. Calligraphy is such a beautiful art form with such an interesting story going back thousands of years. It is a powerful medium with broad appeal; it has the ability to move and inspire people. It needs to evolve to survive, but I am confident that is happening.” 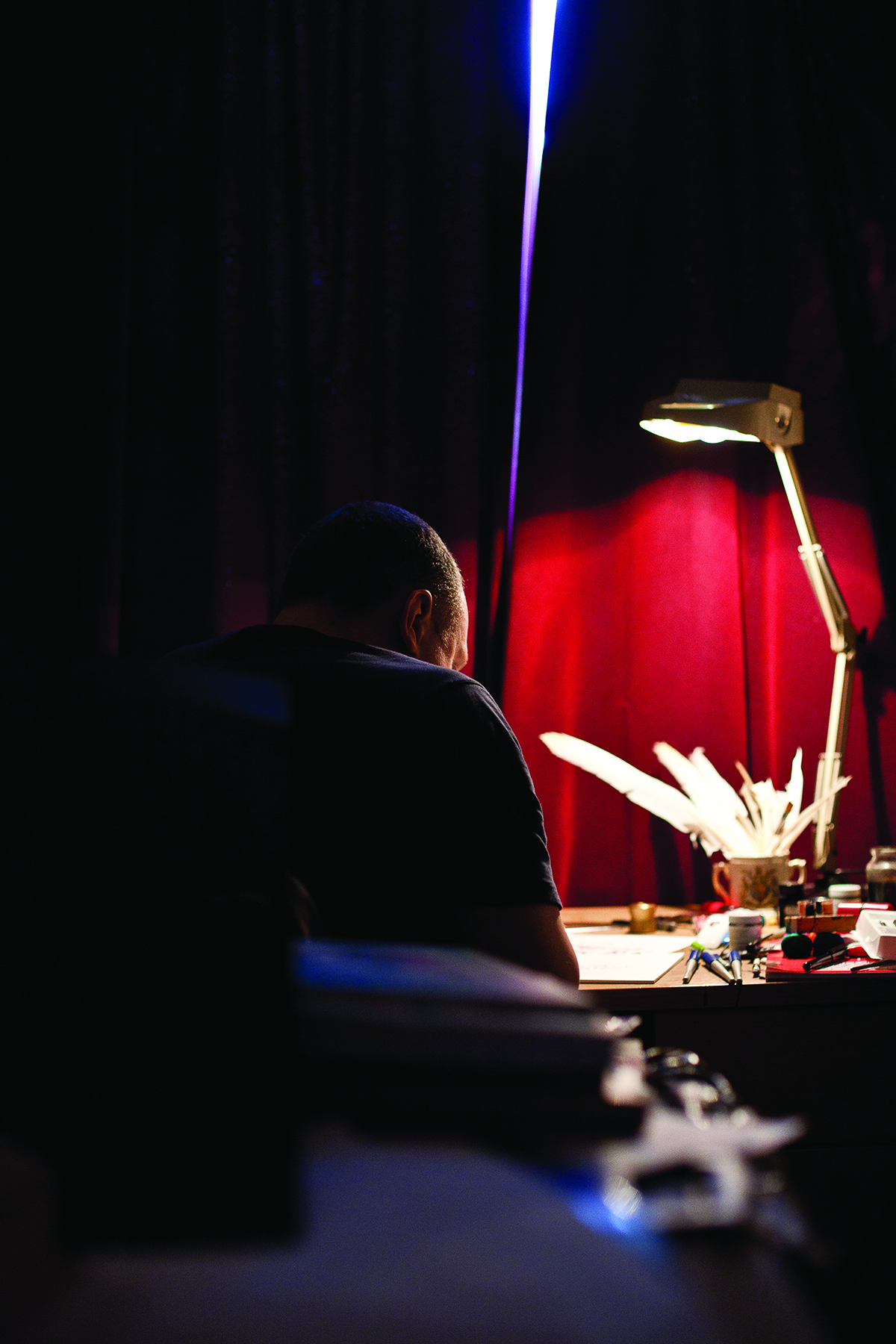 More of Lester’s work can be seen at seblester.com, which also includes a selection of fonts, prints and original artwork available to buy. His ‘How to Get Started in Calligraphy’ essay, which recommends suitable calligraphy tools, is at seblester.com/calligraphy

This article is featured in The Social Issue of Creative Review, May 2016. Order your copy here.