Solarized Like Zayn: The Digital Sabattier Effect for Surreal Black and White Portraits

What You’ll Be Creating

We’re big fans of the pictures of Man Ray and Edward Weston, so when we saw the solarization effect that they used so well in turn up in Pillowtalk, the latest music video from Zayn (formerly of One Direction), we decided to try and recreate it digitally.

In this tutorial you’ll learn how to do it too. Later this month we’ll show you how to recreate some of the other special effects from this trippy ride:

The inspired solarisation effect is at the 12 second mark of this video.

Solarisation is the result of overexposure of a negative while it’s in the camera, and it creates a unique black and white effect. Over the years, solarization has been recreated in a controlled way in the darkroom, which is called the Sabattier technique or Sabattier effect. Rather than the negative being overexposed in camera, a film image is briefly exposed to white light during the development process. Both solarisation and the Sabattier effect result in the distinctive, partial inversion of the image.

The Sabattier effect has been used by fine art and portrait photographers like Man Ray and Edward Weston to create incredibly interesting images. It’s surreal, but at the same time, the subject is still identifiable. It’s particularly effective with portraits, which is what I’ll use as an example in this tutorial.

But First, the Awesome Power of Curves

The actual process of the Sabattier effect is simple to do digitally, but to do it properly you need to understand how a Curves adjustment works. For most photographers, Curves are just a way of adjusting brightness or contrast; in fact, they’re a lot more powerful than that.

The key to grasping Curves is to understand what the controls represent. The Curves tool is a graph. On the X-axis you have the Input level and on the Y-axis you have the Output level. Each axis has values that range between 0 and 255. There are actually four separate Curves: RGB, Red, Green, and Blue. For this tutorial I’m just going to focus on the RGB curve, but the other three can be tweaked in the same ways for different effects.

The slope of the line on the graph that you adjust to modify brightness or contrast controls how the Input and Output levels are mapped to each other. When it is at a 45 degree slope (the default) the Input and Output levels are the same: 0 Input maps to 0 Output and 255 Input maps to 255 Output. When you adjust the brightness of the image by raising a point on the Curve, it changes how the Input values are mapped onto the Output values.

A simple Curve layer that brightens an image.

In the example above, I’ve added a point at Input 148 and dragged it up to map the Output to 184. This means that any pixels with a luminosity value of 148 before the Curves layer is applied will now have a luminosity value of 184. The surrounding values will similarly be modified so that the Input coordinate of the slope is mapped to the Output coordinate of the slope.

While most of the time you want to make reasonably subtle adjustments with Curves, to recreate something extreme like the Sabattier effect you need to use a more complex curve. One of the key hallmarks of solarisation is that the brightest highlights stay bright while the darkest shadows also turn bright. This means we’re going to need to use an unconventional curve to get the effect we want. Let’s look at how.

How to Solarise a Portrait

Solarising is a pretty heavy effect. Trying to do regular retouching after you’ve applied it makes life a lot harder. Thus, the first step in applying the Sabattier effect to an image is to finish your regular edit first. 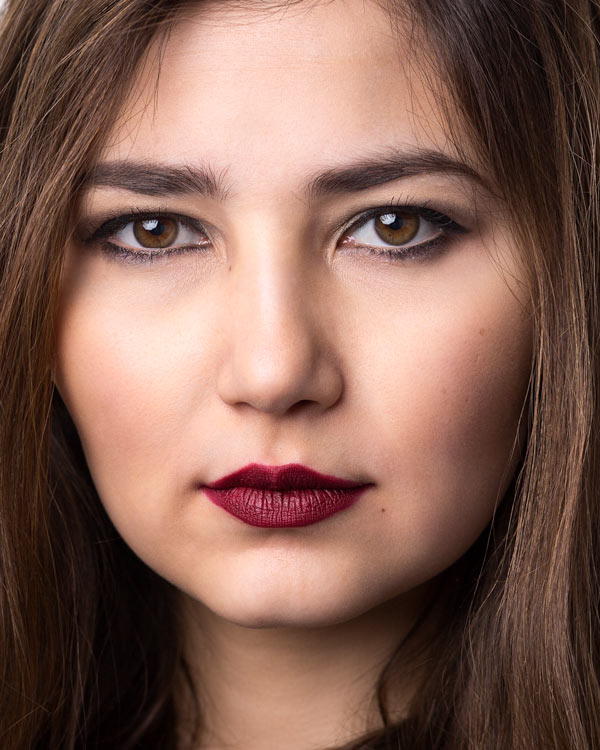 If you want to remove any distractions, dodge and burn your subject, or do anything else, do it now.

Convert the Image to Black and White

While there’s nothing stopping you from leaving the image in colour, it results in a very offbeat and often ugly effect. To recreate the elegance of the Zayn video you need to convert the image you’re using to black and white. 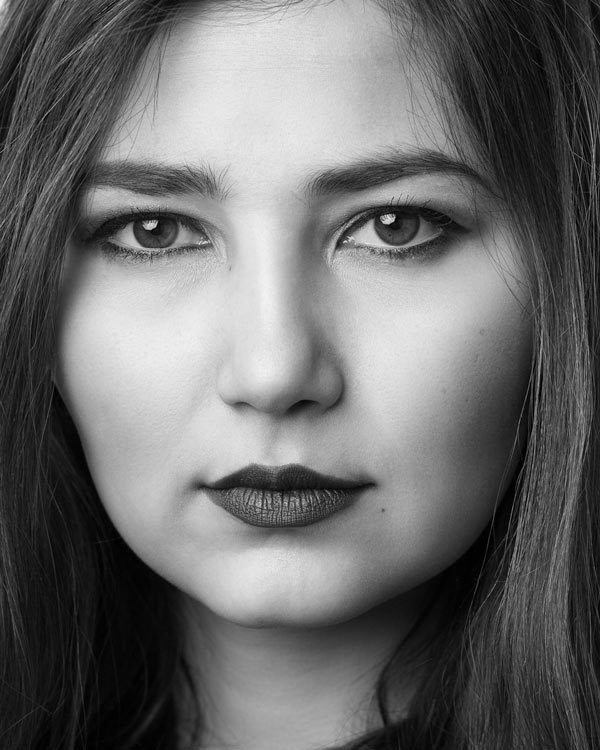 The image converted to black and white.

There’s no special consideration for how you do it. Lightroom, Photoshop, or whatever you prefer; any conversion that works for the image will do.

As I mentioned above, the key to the Sabattier effect is a Curves Adjustment layer. Add one now.

A solarisation Curve is often described as U-shaped but it’s a little more complicated than that and depends on the image. You want to brighten the Shadows, darken the Midtones, and do very little to the Highlights. Just slapping a U-curve over the top and calling it a day won’t give you a very accurate effect.

Where the Shadows, Midtones and Highlights fall is determined by the image itself. Look at the histogram and work out where they are. In the image I’m using, the Midtones are actually quite dark so the U-shape is skewed towards the left. 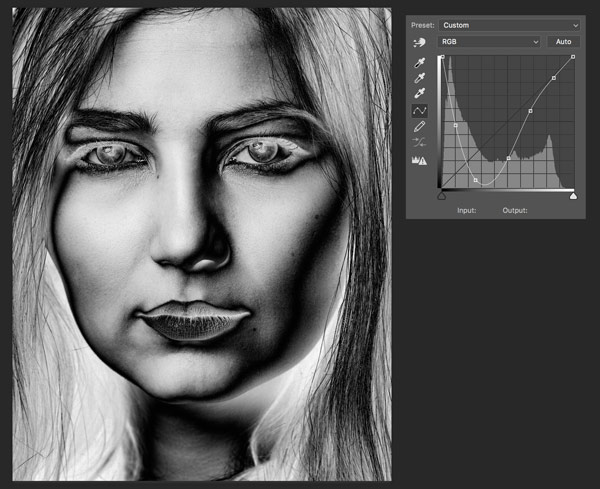 Start by dragging the black point all the way to the top of the Curve. This maps 0 to 255. Next, click somewhere in the middle of the Curve and drag it down towards 0; this will allow you to see how the effect is being applied.

Tweaking the Midtone point is the most involved step of the process. You need to play around with different positions and numbers of points until you get an effect you like. I ended up using four points to control how the effect was applied to the Midtones.

One thing to avoid is clipping your Curve. If you’re not careful, the Midtone point will map a range of values to 0 which rarely looks good.

With the Sabattier effect applied, the image is largely done. The only thing left to do is tidy up any distractions it’s introduced. For example, if you’ve a dust spot on your sensor, the process will often highlight its edges. 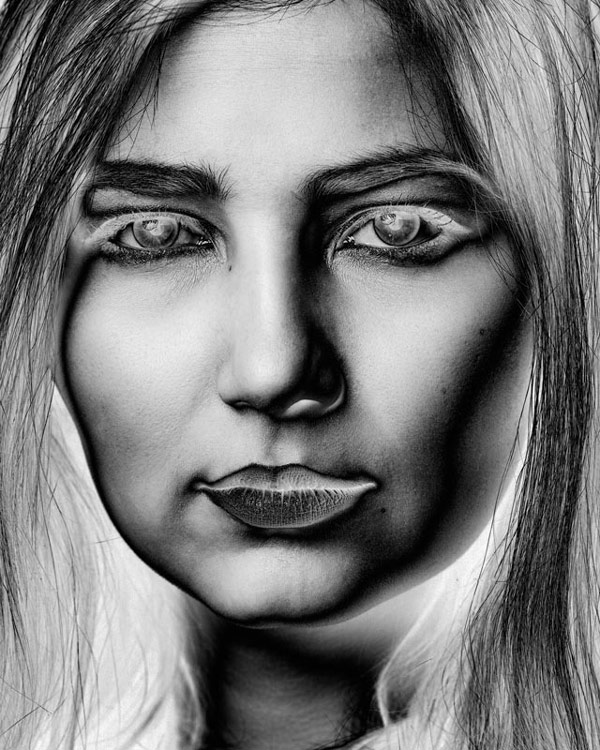 You can also use another Curves layer to tweak the overall brightness or contrast of the image.

What Does (and Doesn’t) Work

Solarisation is an interesting effect that works best on certain subjects. Isolated portraits against white backgrounds are one of the most effective subjects. If the background is too busy, the effect can be disorienting rather than elegant.

The background makes this image too cluttered.

Fine art nudes are also a great opportunity to use the Sabattier effect. By keeping the Midtones relatively stable, the skin still maintains a natural appearance.

With all that said, there’s no firm rules about what subjects won’t work with the Sabattier effect. I’d intended to use the landscape below to demonstrate a subject the Sabattier effect doesn’t typically work for, however, I think the result is really interesting. The effect on the mountains isn’t ideal but the sky and moon look stunning. With some tweaking I think this could be a very strong example. 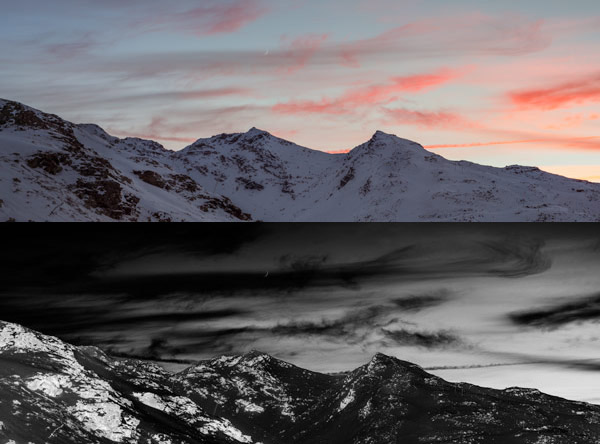 This wasn’t meant to work!

As a photographer, you are looking for inspiration in the world around you and that hopefully includes other peoples’ work. If you spot an effect you like, try to break down how you could recreate it. Mimicking the Sabattier effect only requires a single, if complex, Curves layer. Many effects are even simpler to work out! Stay tuned for more.

If there’re any cool effects you’ve seen in pop culture that you’d like me to try and break down, please share them in the comments below. We’d also love to see your own images with the Sabattier effect applied.