Phil Collins’ Take A Look At Me Now campaign has seen the reissue of six of his solo albums on the Warner label. According to Collins’ management, the singer and musician was keen to add something to the visual side of the reissues that would enable him to put a more personal stamp on the campaign. His idea was to revisit the covers for the records – famously all portraits of Collins himself – and recreate them as accurately as possible.

Collins and his management team worked on the idea with art director Chris Peyton at Unknown Studio who then helped put the concept into a workable brief for photographer Patrick Balls and retoucher Martin Griffin who runs The Lemonade Factory.

Initially, the team worked on recreating two covers at Elk Studios in New York: Face Value, Collin’s first solo release in 1981 and Both Sides, which originally came out in 1993. Griffin then retouched the images to make them even closer to the originals. On the strength of this work, Collins returned to NYC with Balls and Griffin so that they could shoot the rest of the albums in the series.

We spoke to the pair about the shoot, the techniques they used and what some of the main challenges in recreating the images were.

Creative Review: What were the main elements (lighting etc) that you needed to consider in the recreation of each cover?

Patrick Balls: Once we had the original sleeves, Martin and I set about analysing the covers and working out how we would light it, paying close attention to the eyes and seeing if we could work out where the light source was and what sort of light it was by the shape of the ‘catch light’.

For instance, if you look at Face Value you can see that from the catch light in the eye the original cover was shot with an overhead rectangular soft box and Both Sides with a circular one.

No Jacket Required sleeve (1985) and reissue version on right

Both Sides sleeve (1993) and reissue version on right

As we were working very closely with Phil, Martin and I decided that we would mock-up and do the retouching while shooting.

We shot tethered and had two 27-inch monitors set up, one for image processing and one for the retouching – as I was shooting, the images were going straight to Martin who was mocking up the covers. So by the time Phil was off his seat we already had a rough mock-up of the sleeve.

Direction was key here as Phil was having to take a visual picture of the original cover and then replicate it exactly, concentrating on eye and mouth shape and how much the head was tilted, all these elements would effect the lighting and the angle of the camera.

Getting all of these elements to work together was key – and I was relying on Martin and Ryan Burke our digital tech for instructions as they could see the images coming in. 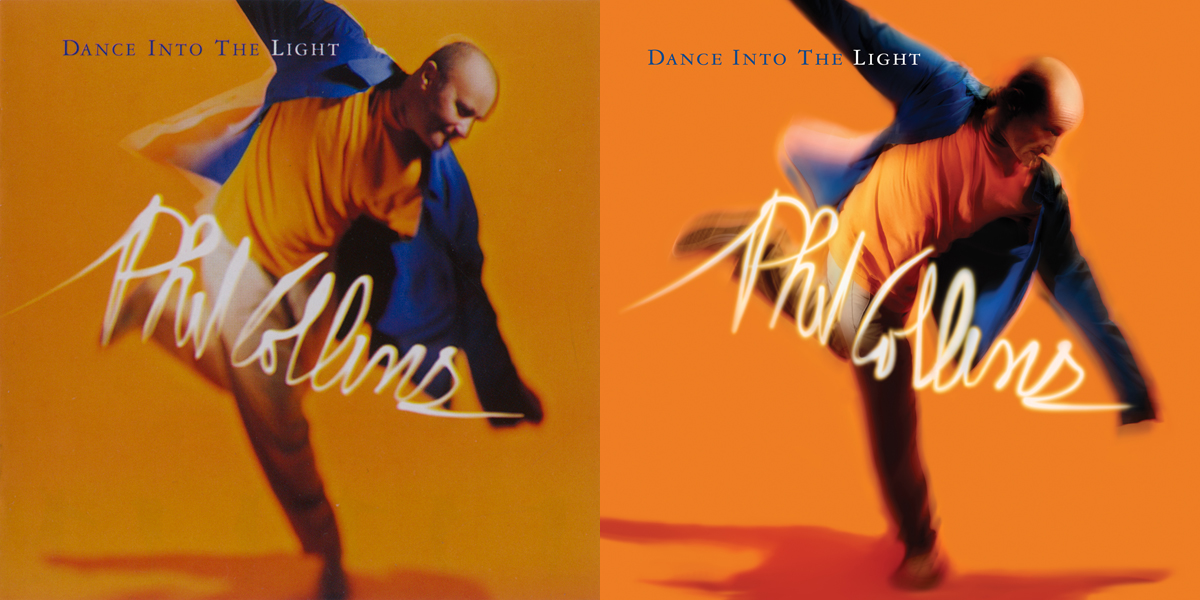 Dance Into the Light sleeve (1996) and reissue version on right

CR: Of the images you made, which proved the most challenging to recreate? Dance Into the Light looks like it might be a contender, with the most elements to manipulate?

PB: Dance into the Light was the trickiest to recreate, for many reasons.

Technically, we noticed that the original cover had two light sources – fixed and flash. This was to capture the floor shadow and Phil’s blurred dance movement in the camera – that along with replicating the movement of the clothing, too.

Then there was getting Phil to replicate the actual dance movement – which we were apprehensive about, although, funnily enough we ended up using his first take as the final sleeve image.

We were able to take our time on the covers paying attention to detail, catch lights, shadows and getting the mood right.

CR: Martin, what’s the level of retouching work like on a project like this? What were some of the techniques you used to make the images look even more like the originals?

While on set, with direction from Phil and Tony we spent a bit of time creating these tones and feels through Photoshop, colour tones, contrasts/curves, building up the feel and mood of the shot.

Staying true to camera image with less emphasis on retouching/post processing. Phil was very much of the opinion that the images represent him as he looks today.

Each album in the Take A Look At Me Now series has been remastered by Nick Davis. A remastered version of …But Seriously (1989) is expected to be announced soon. See philcollins.com

Read more here:: Take a look at me now – recreating the artwork for Phil Collins’ back catalogue reissues