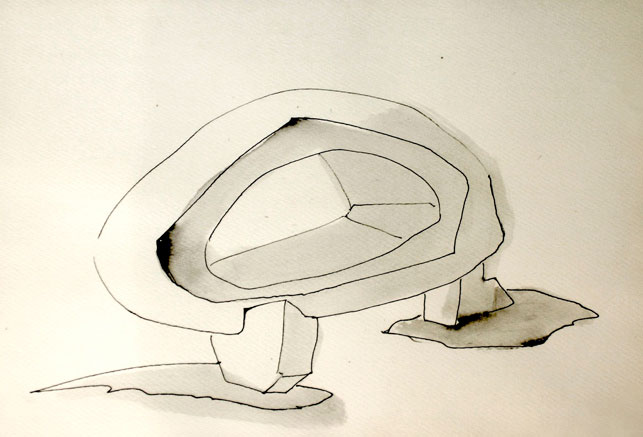 At the entrance to the current exhibition Endless House: Intersections of Art and Architecture is Frederick Kiesler’s Endless House (1947–60). He envisioned this eclectic, flexible habitat as “a living organism, not just an arrangement of dead material.” He saw the house as a composition of spaces “as elastic as the vital functions.” A selection of drawings features his exhaustive investigation of forms for it, drawings which, through his lively use of ink and superimposition of multiple sketches on transparent overlays, approach animation.

Visitors will notice that one drawing hangs slightly above the rest (see above). Done in 1947 and recently acquired by MoMA, it is an example of one of Kiesler’s early visualizations of the Endless House. The ink-on-paper sketch (shown at top) depicts a curved structure that resembles a sliced egg jauntily propped up on two squat plinths. With no indication of how big or small it is, its scale appears provocatively poised between a proposal for a sculpture and a study for an architectural enclosure, a sort of cave-like shelter. In many ways, this ambiguity is precisely the point.