The Fox and the Star by Coralie Bickford-Smith 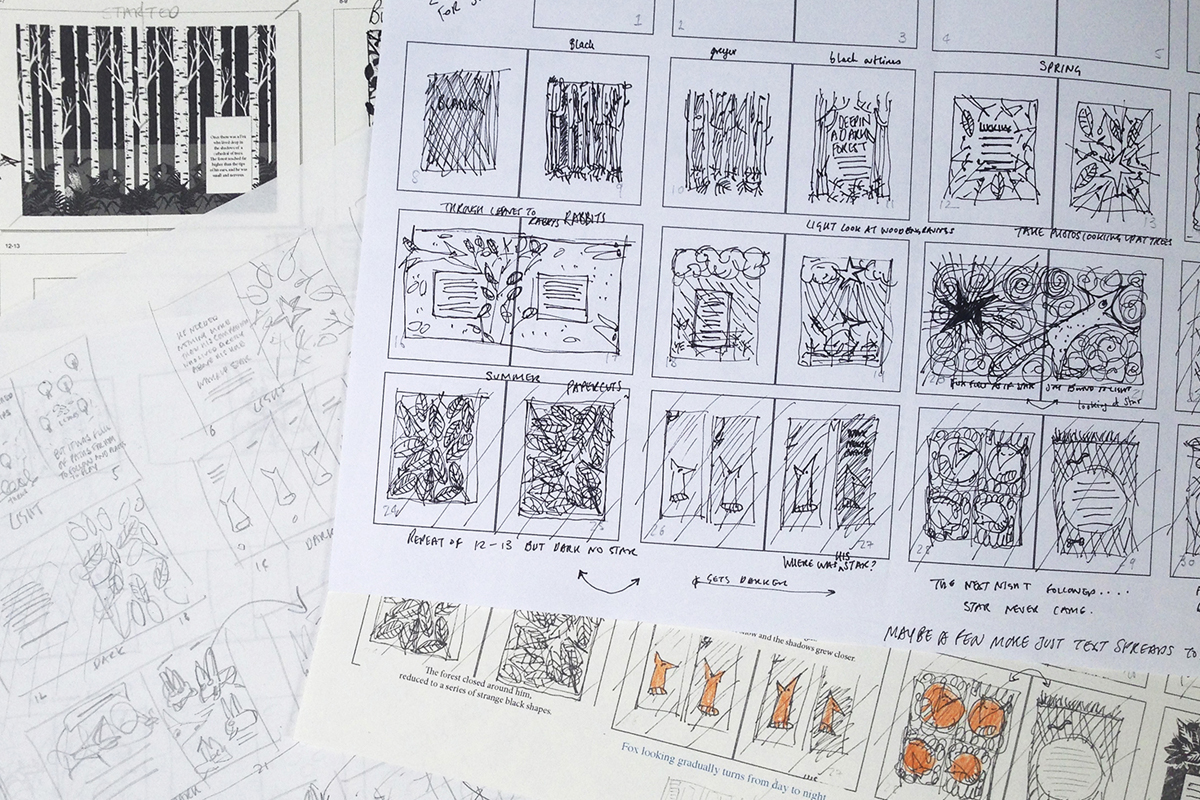 Bickford-Smith has made a name for herself as one of the most respected book cover designers around. She has created numerous series designs for Penguin – from the Gothic Horror and Sherlock Holmes collections, to the lavish editions of F Scott Fitzgerald’s works and the extensive Cloth Bound Classics range – but she hasn’t produced an illustrated book of her own before.

The Fox and the Star, which is published by Penguin imprint Particular Books, tells the story of a fox who lives in a deep, dense forest – for as long as he can recall his only friend has been a star, who lights the forest paths for him each night. But then, one day, the star isn’t there anymore and the fox has to face the forest all alone.

The book is illustrated throughout with details from the fox’s nocturnal habitat – ferns and brambles set the scene for various other animals, too, while the rain, the night sky and startlight all make their mark on his environment. 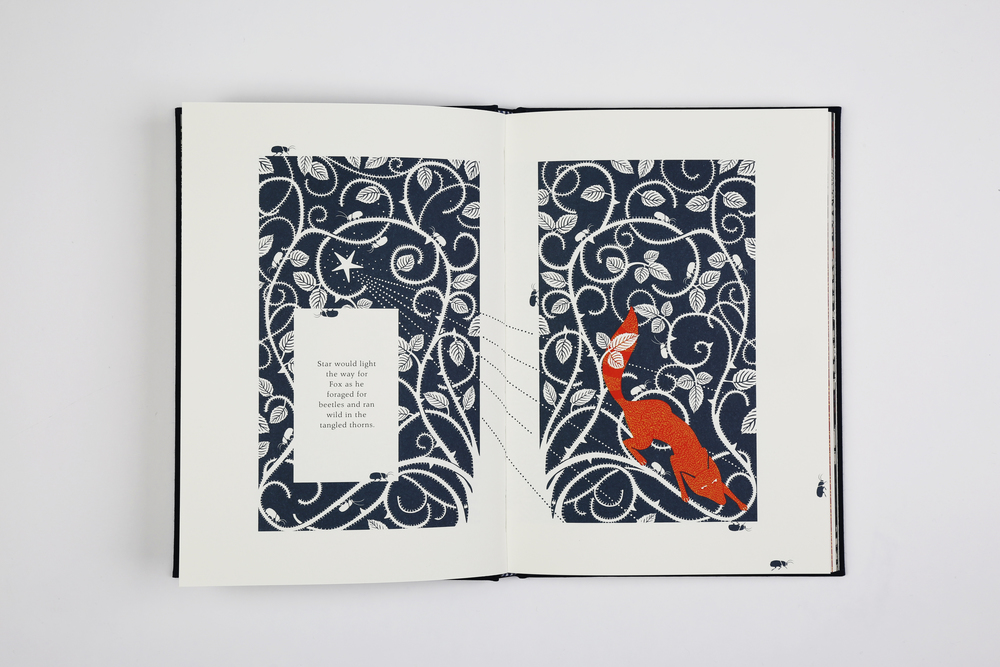 This is a bit of a departure for you, so can you tell us a bit about the background behind this project? Working as a designer, had you always wanted to work on your own book, as both illustrator and author?

Coralie Bickford-Smith: I have been inspired by William Blake for most of my life. He was a master of the book, having written, designed, illustrated and printed his own. To follow in his footsteps became an aspiration of mine. I avoided creating something that was purely a children’s book, although I’ve taken the visual language of children’s illustration and tried to make the aesthetic and words more complex. I’ve endeavoured to create a story that is universal and works on a number of levels.

How did the idea for The Fox and the Star come about? Did you work out the story and then look to create the illustrations around the text – how did you put it together?

CBS: The story was the starting point. It had to be so that there were strong bones supporting everything else I had to create. There were many rewrites and discussions about the storyline because until I had confidence in the strength of the story there was no way I could start building up everything else. It came from my own personal experiences so I could be sure that I was delivering something I could believe in.

I hope that people who read the book can also relate the story to their own experiences. I wanted to convey a life lesson, impart a piece of wisdom that I return to again and again – living is learning to deal with uncertainty and finding joy and beauty in those moments.

The next stage was storyboarding, trying to fit the story into the right amount of pages so that it flowed, work out what I would illustrate and how I would try to make the images not just reflect the text but create tension and expand the story. Once I’d fixed this I just drew and drew each page time and time again, thinking about angles and perspective to try to create variety in the images.

The words constantly changed and were tweaked continuously. Even when I was at the final stage with the artwork the words were edited again. It was an intense process. My dreams of a sabbatical where I could meet friends for lunch and go on long runs turned out to be a fantasy. 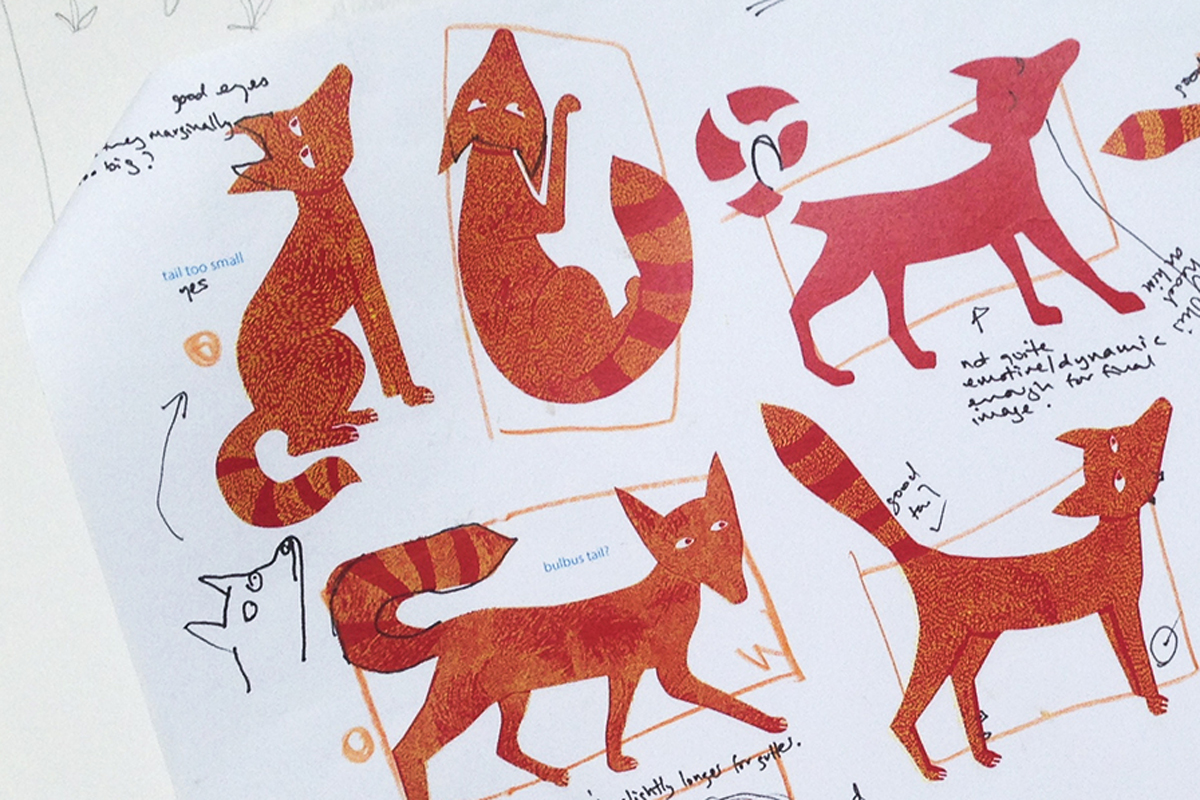 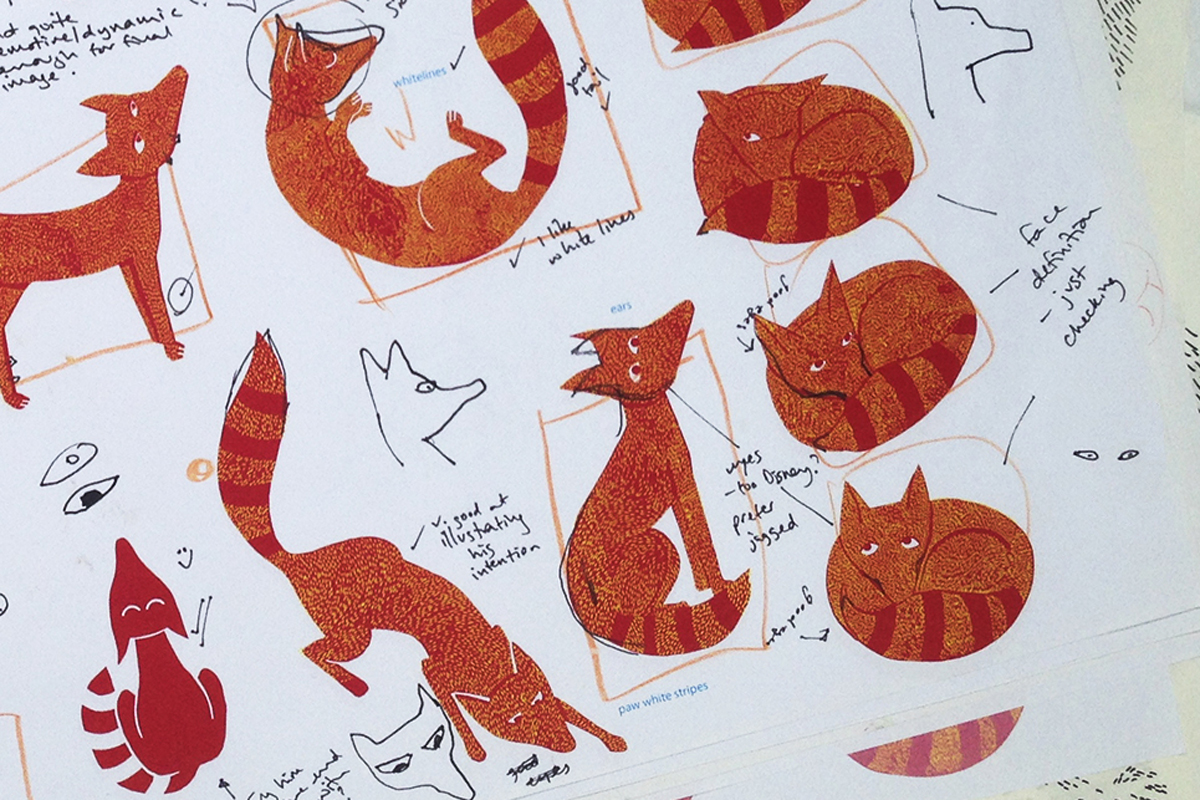 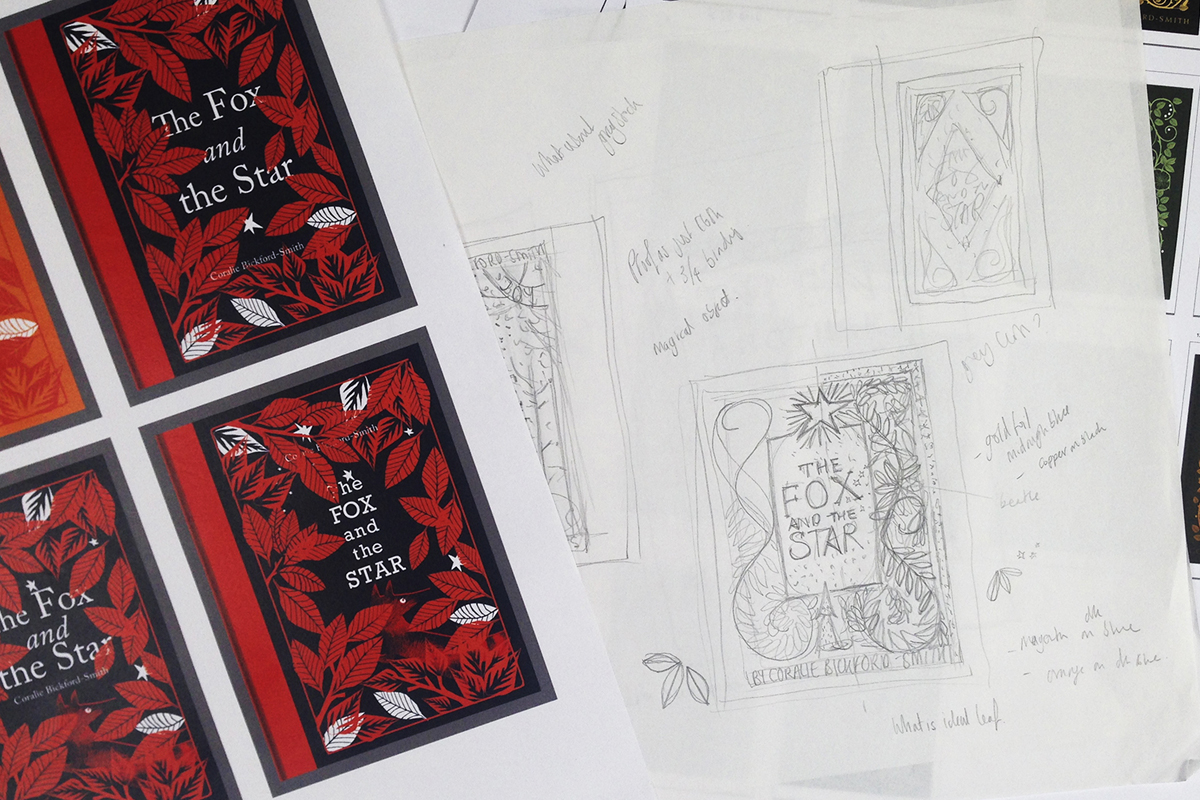 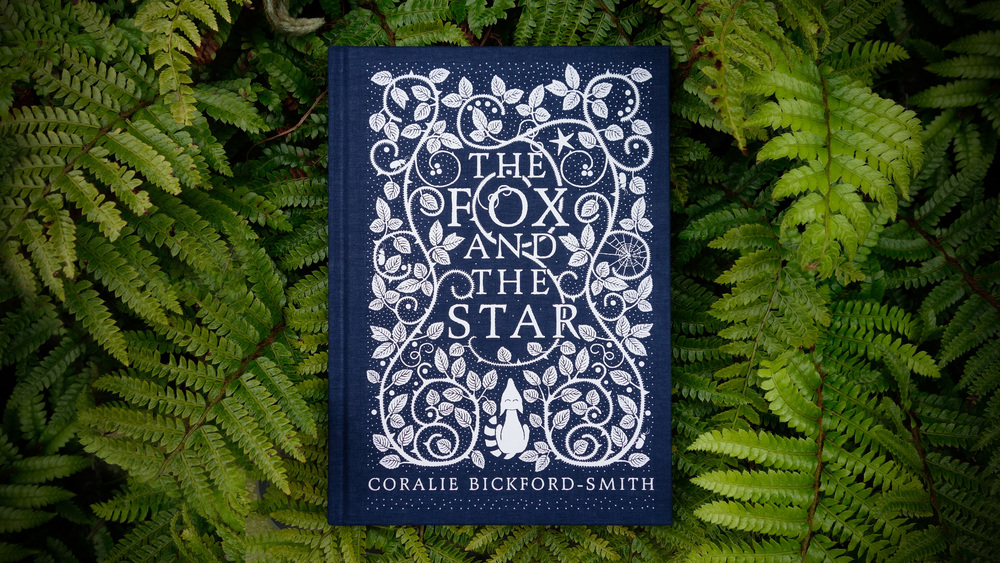 Your sketches suggest that the fox took a while to get right – what were you trying to achieve with him? And what did you want to convey in the way he was drawn?

CBS: Yes, characterisation is big part of being able to tell a consistent story. It was something that I had the most fear about as it was a totally new area of illustration to me. I wanted the fox to reflect naivety, innocence, and a certain amount of anxiety. An embodiment of my own experiences of loss. A semi-autobiographical fox.

To create expression and emotion was interesting, a whole new load of stuff to learn. I like that he is not anatomically correct, he’s not perfect, but does have a certain cuteness that hopefully creates compassion with the reader.

Were there any pages or spreads in particular that were more of a challenge to do?

CBS: The spread with the big fox eyes was a last minute change. I had been trying to show the pure joy of Fox and his life with Star. It was a spread that I started at the beginning of my sabbatical and had returned to time and time again. Whatever I did was just not working. I wanted lots of different images of Fox floating in space with Star. A really psychedelic spread that was very over the top.

It was not until the last few weeks when I was compiling all of the spreads for final sign-off that the idea of scale and simplicity dawned on me. It was one of those moments where months of worry and frustration were zapped away and you just know that you have nailed it.

It’s my favourite spread now, we call it the ‘orangeade’ spread. I’ve had a report that a little boy has to have time out when he gets to that spread as he explodes with excitement as he turns to the page.

The colour was carefully considered as well. I wanted to use a restrictive colour palette that would work with the joyful sections and the sections where Fox is really lost. In the end I used five Pantones. The use of text black for co- editions was something I had to get my head around, but necessary so they can strip out just the black plate for translations.

There were a few spreads where I pushed these restrictions to the limit. That was fun. I love ripping up the rules when it’s warranted.

Layout roughs for The Fox and the Star

There are some lovely moments in the book when characters emerge, or become part of, their surrounding environment. I wondered how your skills with patterns and graphic shapes came into play here?

CBS: For the layout I wanted to evoke a sense of traditional book design, a strong grid based on the ‘golden ratio’. I wanted the layout to be structured and strict so that when I broke out of the grid it would create a sense of playfulness.

I knew that I could create page layouts of classic design and pattern, but I couldn’t tell the story with this alone, the story had to be strong for the visuals to have meaning and impact. There had to be a balance as well, not every spread could be my usual pattern-rich blowout. Sometimes I needed to create space and peace to give a sense of pace and flow. 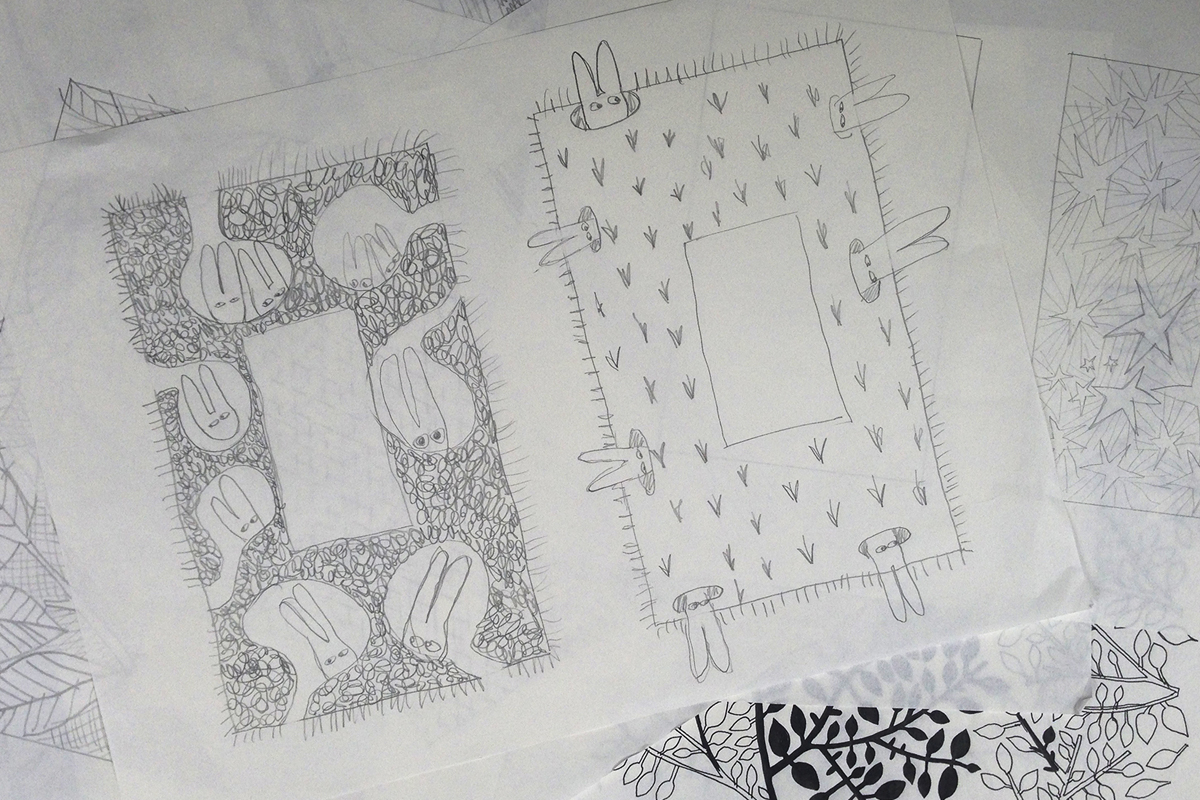 Roughs for Fox and the Star spreads

Finally, has this experience encouraged you to work on, or plan, any further illustrated books in the future?

CBS: I do have new ideas that I’m excited about. It’s interesting to try different things and shake up life a bit. I can see what I have learnt and what I have yet to learn and that makes me happy, it reveals possibilities and opens my mind to creative potential.

The best thing is that it re-engaged me with my childhood love of drawing. Now I have a drawing desk as well as a computer desk in my studio. It’s great to have the freedom away from the Mac. Next is the fulfilment of my dream to set up a printing press in my kitchen and turn super-Blake. No one will see me for months apart from my cat and the local cheese shop.

The Fox and the Star is published today by Particular Books. See penguin.co.uk. For more of Coralie Bickford-Smith’s work, visit cb-smith.com

Read more here:: The Fox and the Star by Coralie Bickford-Smith