The ‘internet of the disconnected’ and the Cuban media revolution 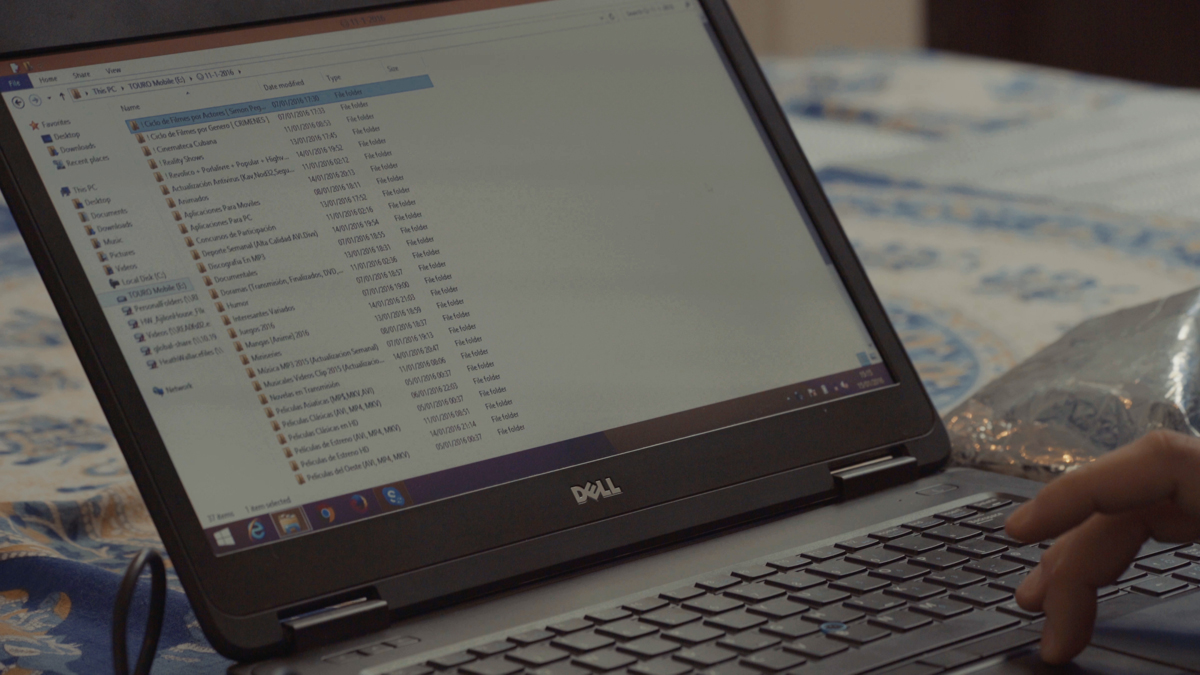 Obama, the Rolling Stones and even Karl Lagerfeld – Cuba has grabbed headlines this year as the mega-famous chip away at the country’s long international isolation. Behind the scenes, though, a quieter revolution is brewing. Cubans, who spent decades on a restricted information diet dictated by the state, are now using homegrown ingenuity to access foreign media and create some of their own.

An issue of El Paquete Semanal, Cuba’s unique digital media distribution method, as it appears on a user’s desktop

El Paquete Semanal – a network of electronic files passed around physically, hand to hand, via USB hard drives – is the glue that holds the emerging Cuban media landscape together. Spanish for ‘the weekly package’, it’s also been called ‘the internet of the disconnected’. Only about 5% of Cubans have access to the free and uncensored internet, and then only sporadically, but by most estimates, some version of El Paquete reaches millions of Cubans.

In January 2016, I visited Cuba as part of a team of researchers from the advertising agency J. Walter Thompson, eventually producing a report, The Promise of Cuba, about changes in the country. While in Havana, I was able to meet one of the many “suppliers” of El Paquete, who agreed to sell us a copy and be interviewed on condition of anonymity. He said that El Paquete had begun in the 1990s as a bundle of videocassettes, and gradually expanded in scope and size with the falling cost of information storage.

Play Off cover, March 2016 issue. The magazine is a PDF, distributed via the El Paquete Semanal system

The weekly 1TB of information that now makes its way through El Paquete’s distribution system contains multitudes: Japanese manga, telenovelas, Bollywood films and even Cuban-made ‘humour’ videos, similar to amateur YouTube content. But it’s also created a pipeline for a new kind of Cuban media—independent magazines, the first to emerge in decades. (The low cost of digital reproduction is key, and a game-changer, in a country where resources can fluctuate—one of the last independent rags of the old media era, a Catholic magazine that folded in 2007, closed shop for lack of toner and copy paper). 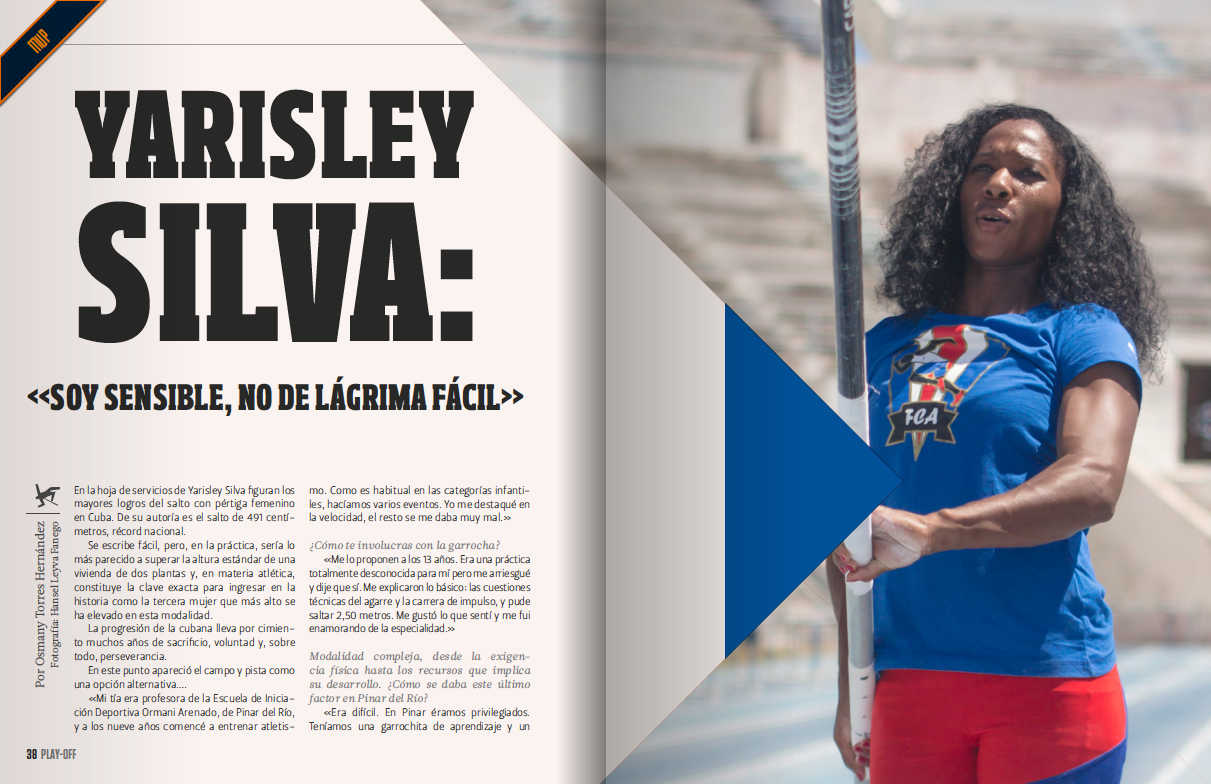 Spread from Play Off sports magazine

The new magazines are slick, international and design-forward. “The main difference between what we do and the official media is that we come from the art world,” said Pedro Enrique Rodríguez Uz, director general of Play-Off, a digital-only sports title. “We take more risks visually, and we use more artistic photos, illustrators and designers.” 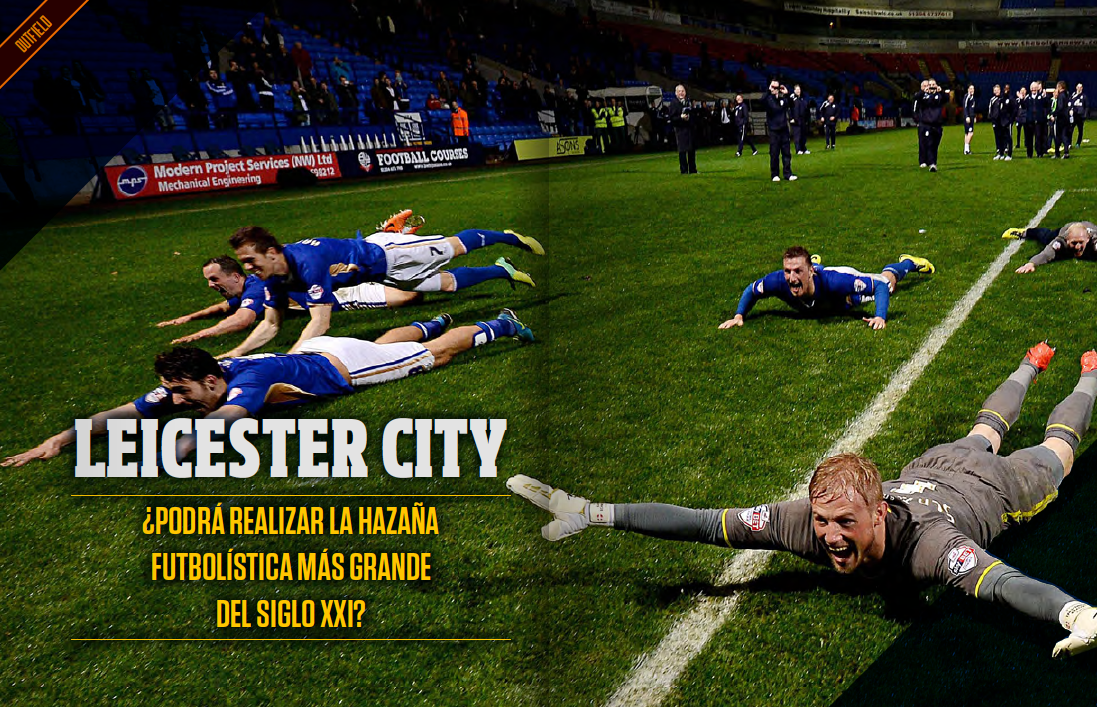 While Play-Off is not explicitly political, it’s difficult to write about anything in Cuba without touching on sensitive issues. In April 2015, Play-Off published an infographic showing the names and teams of Cuban baseball players, or peloteros, who had defected to the United States. In a country where baseball is considered a national religion of sorts, this was a bold move.

“These were data points that were known, but never all in the same place in a conscious study like this,” said Rodríguez Uz. The magazine followed up with a photo essay on the facilities used in the 1991 Pan American Games, now in sad shape. “We have, without really wanting to, created a conscience,” he said. 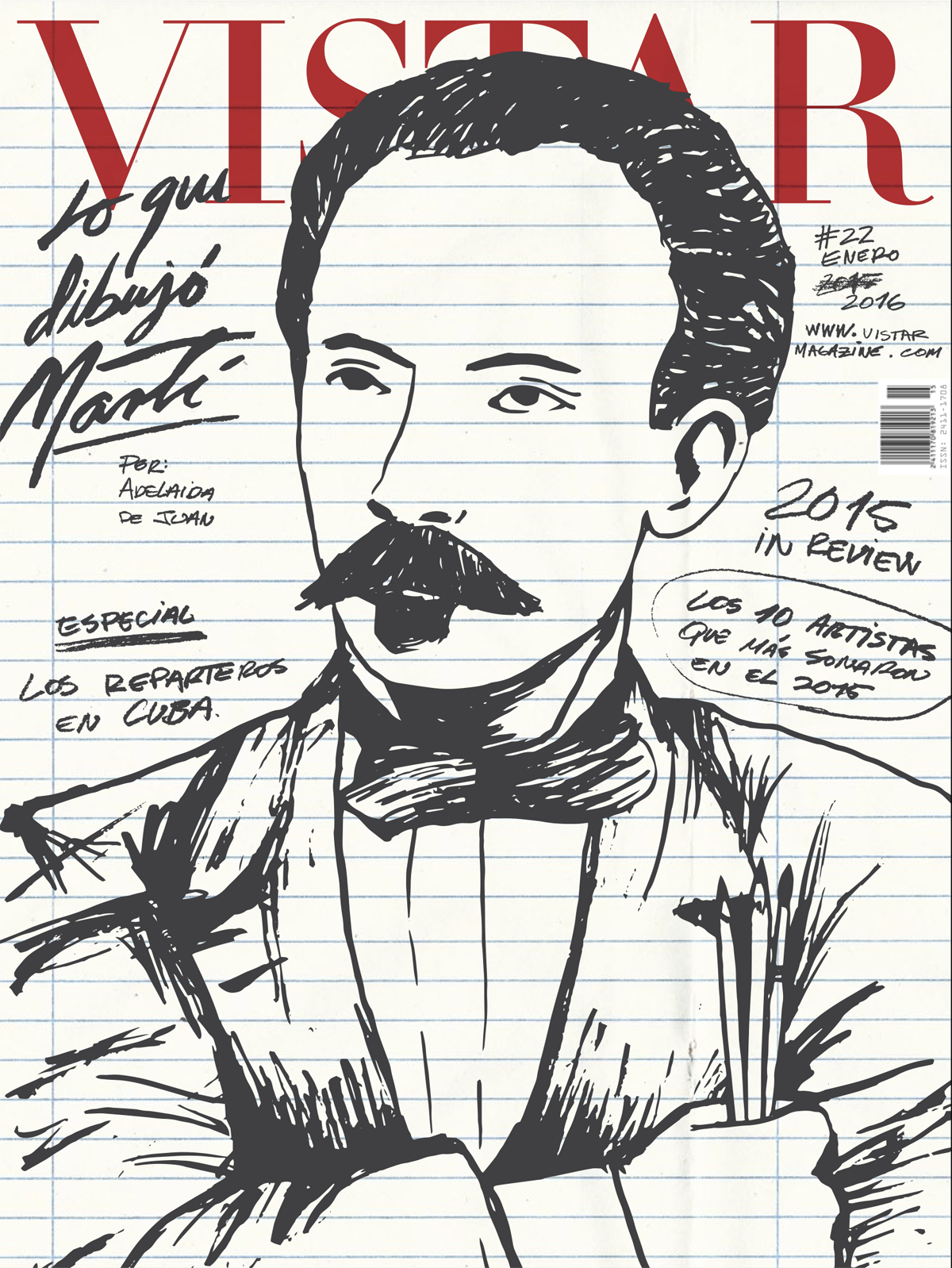 Vistar, a lifestyle magazine that focuses on music and the arts, was founded in 2014 and has since become essential reading for Cuba’s emerging youth subculture. Its April 2016 issue includes an interview with DJ and producer Diplo, a review of the Rolling Stones’ free show in Havana, an article on Google’s efforts to break into the country, and a feature on Cuban film director Arturo Santana, among other stories. 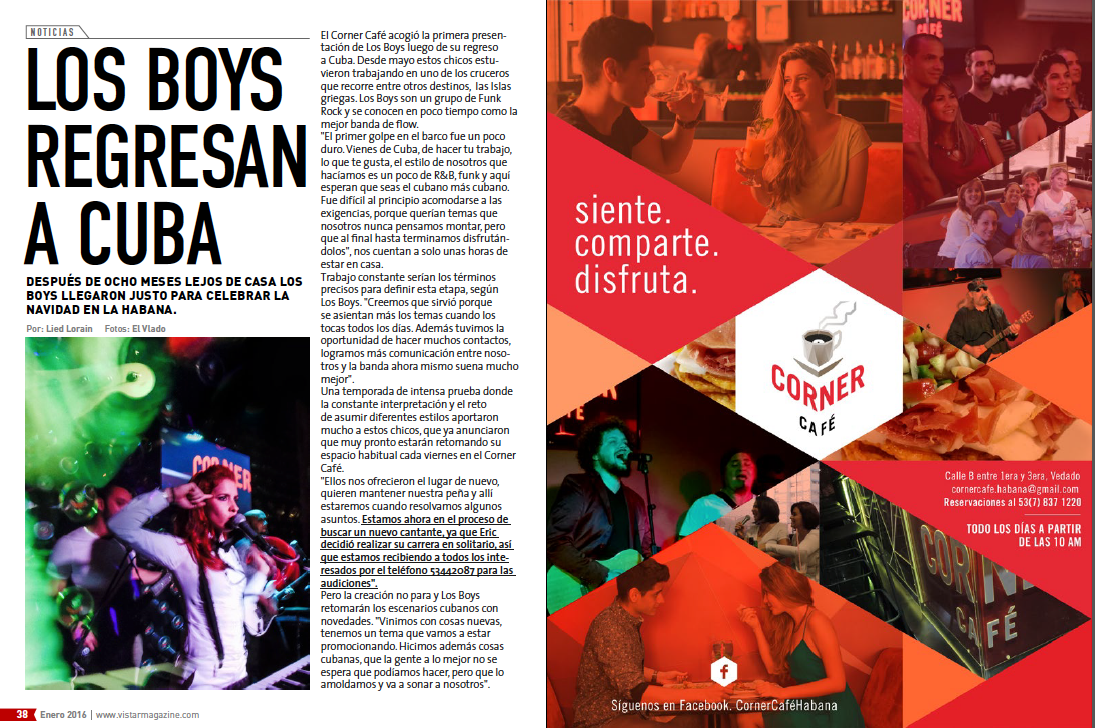 Spread from Vistar, January 2016 issue, with ad on right

“The magazine is the reflection of a generation, like us – young people who think differently,” said Robin Pedraja, Vistar’s creative director. “Thanks to all the changes now inside the political system, new doors are opening and new artists are coming to Cuba, and this serves us in many ways to generate content for the publication.” 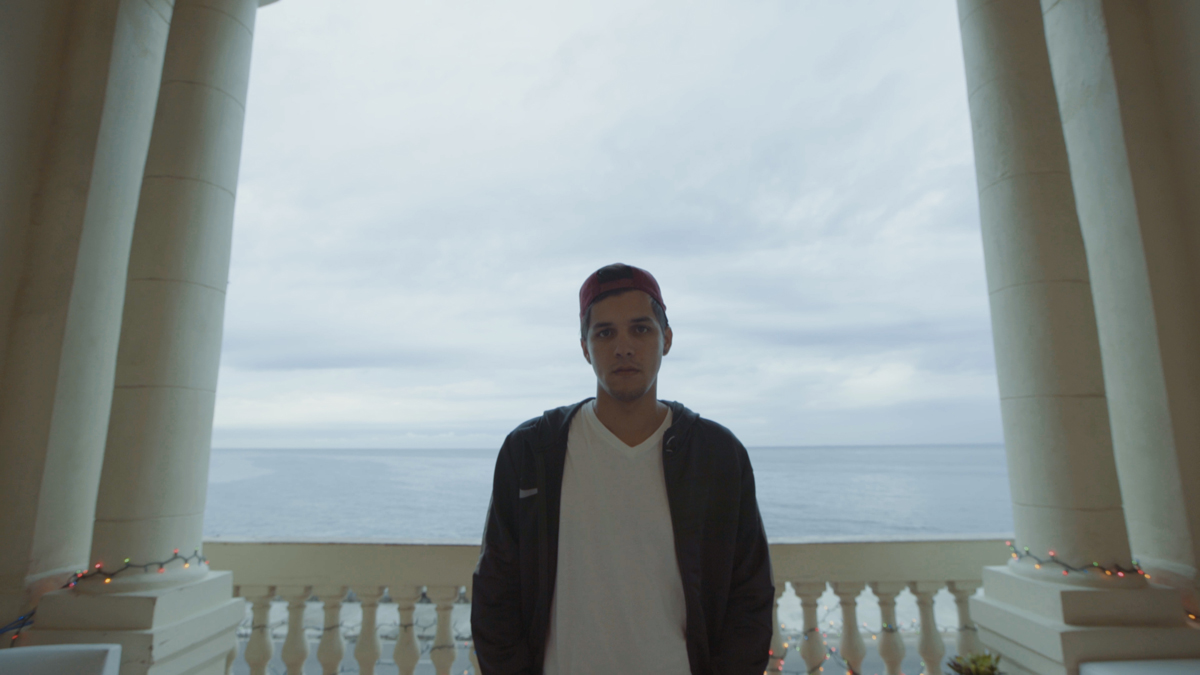 Like the other new magazines, Vistar features advertising in a country where ads are technically illegal. It promotes both small-scale local businesses and international brands from Mugler and Givenchy to Sol and Miller Light. Adopting the dual role of media brand and publicity agency, Vistar is eager to cover Cuba’s youth culture and create ads for brands that hope to profit from it. “I would like to work with all the brands that come to Cuba,” Pedraja said. 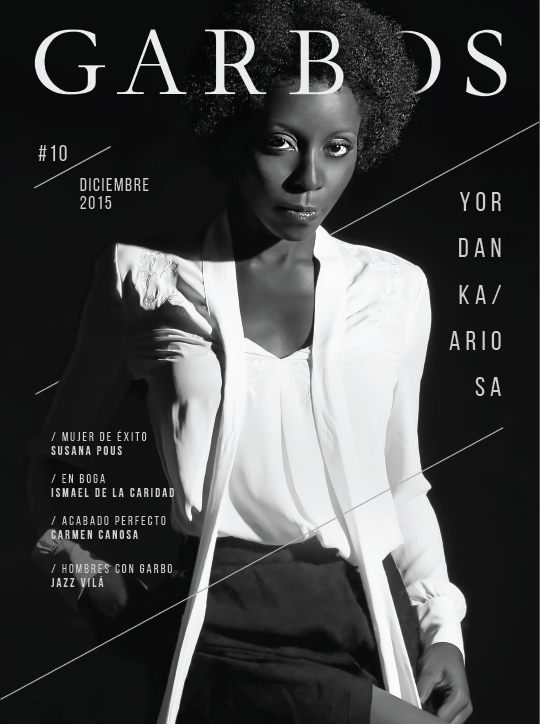 He may soon be getting more competition. Women’s titles including Garbos and Novisima have entered the market, and more specialized magazines are sure to follow. Economic changes under Raúl Castro have unleashed a flood of private businesses, from restaurants to art galleries to design shops, and all of them need places to advertise.

Google hopes to finally connect the country in the months and years ahead, and there are signs that the government is coming around to the idea. But Cubans aren’t waiting around: digital publishing and advertising are already thriving without the internet.

The full JWT Intelligence report, The Promise of Cuba, can be accessed here. And an accompanying video series is available here

Read more here:: The ‘internet of the disconnected’ and the Cuban media revolution