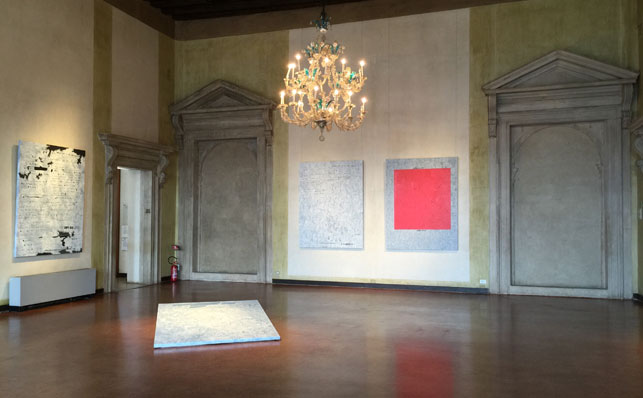 Traveling to the Venice Biennale and Milan for the first time, I expected to find myself exposed to a variety of curatorial approaches and institutions in an international setting. From a massive global biennial to private museums and foundations, my destinations would offer a very different perspective, approach, and geography for exhibitions. While I anticipated contrasts across space, between global and local, I was struck instead by the juxtapositions of past and present, and the collapsed sense of time in Italy. The treasure trove of old and new creates a true time warp, where the contemporary melds with the ancient and all of the walls whisper reminders to constantly look both forward and backward. This duality highlights the meaning and beauty of both setting and artwork.

Exterior of the Hungary pavilion and signage for “Coffee Ship Bar” at the Giardini Biennale, 2015. Photo: Heidi Hirschl

The floating city of Venice has been historically and culturally preserved, even as modernity washes over its canals—particularly every two years. The Biennale transforms Venice into an international nexus of the most important contemporary artists, practices, and curatorial strategies, all the while maintaining a 19th-century world’s fair model in which each country contributes to an ecology of pavilions. The national platform offers a confluence of architects and artisans of the past and the most creative talents of the present. This year the overarching theme, “All the World’s Futures,” feels ironically and inextricably linked to history. Rather than futuristic, the exhibition seems to be a kind of Wunderkammer with a twilit, indefinite sense of time. Instead of a chronological approach or an unraveling of the thread of time, the Biennale embraces this simultaneous temporal suspension and lapsing in order to juxtapose different periods and cultures. For instance, in the Giardini Central Pavilion, an anthology of Hans Haacke’s polls from the 1970s are presented alongside his first World Poll (2015), which invites visitors to complete a 20-question iPad survey, transforming the old to the new again.

Other collateral events and exhibitions also display appositions where the past confronts the present, and the present is enhanced through its relationship to history. At Museo Correr, Jenny Holzer’s War Paintings, addressing U.S. military operations in Afghanistan, Iraq, and Guantanamo Bay, are exhibited in dramatically expansive and antiquated galleries. Similarly, at Ca’ Pesaro, exuberant Cy Twombly works contrast sharply with the 17th-century baroque rooms in which they hang. The lyrical wheels of paint, which drip streams of brightly colored pigment, come alive amid intricately adorned, high ceilings joined by vast hallways. While the differences at first appear dizzying, they somehow feel natural in this setting, and eventually ground the viewer in the present with a tremendous vantage point. 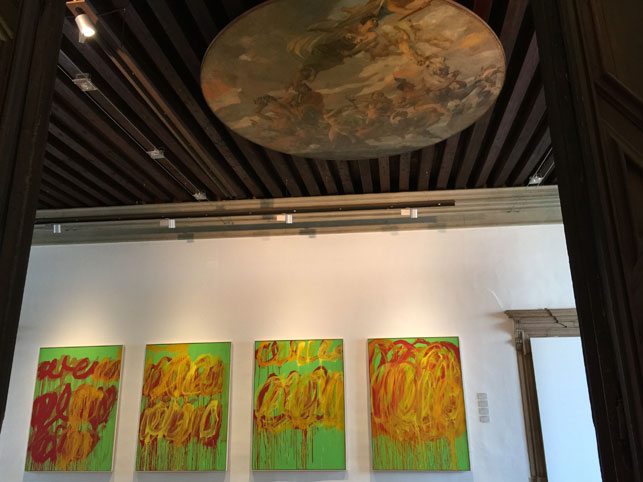 The anachronistic, though uniquely European, private foundation model for collections and exhibitions also contributes to this sense of time travel. In Venice, the Pinault foundation programs two vast spaces. This summer, Danh Vo curated Slip of the Tongue at Punta della Dogana, an eccentric exhibition of art from the 13th century to the present. Meanwhile, across the canal, Palazzo Grassi offers a retrospective of Martial Raysse’s work, including timeless figures by old masters imitated in radical neon colors. 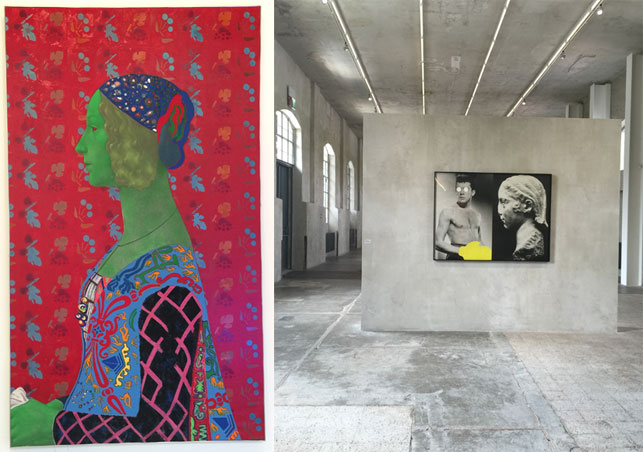 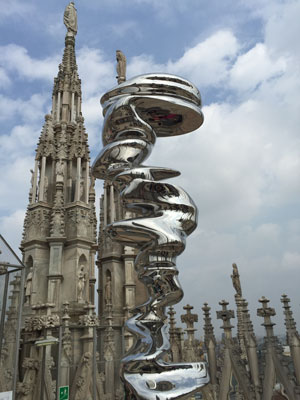 The Prada Foundation—with locations in both Venice and its new home in Milan—similarly marries old and new. The exhibitions of Portable Classic and Serial Classic show classical sculpture from the Renaissance and their replications/imitations with innovative design by Rem Koolhaas and OMA. Their new space blends the building’s original industrial character (as an old distillery) with new architecture to house Prada’s impressive collection spanning from the 16th to the 21st centuries.

Beyond Prada, in Milan you can walk from seeing the 15th-century The Last Supper to Maurizio Cattelan’s aggressive L.O.V.E. (2010) monument to the Duomo di Milano, where recent Tony Cragg sculptures adorn the ancient church’s rooftop. The constellation of dichotomies had me continuously looking both backward and forward. It also made me wonder who has or will get lost in both space and time on these streets—just as I did, with heightened visual awareness and the taste of unforgettable gelato flavors, while dodging the same pigeons (who just might have the whole perspective).