Webpick of the Week: AMY 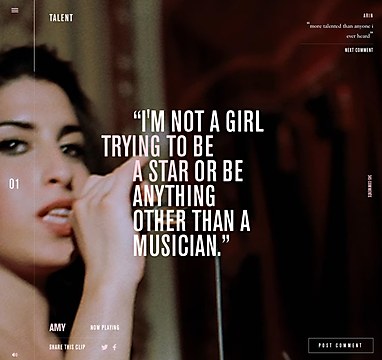 AMY, a documentary recently released in theaters, chronicles the life of well-loved singer Amy Winehouse, who tragically passed away at the young age of 27. For the film’s website, digital agency Watson/DG built a layout based on five different chapters in Winehouse’s life, selected to emotionally resonate with viewers. These themes are brought to life by full-screen video clips cut directly from the film—containing never-before-seen footage of the singer’s life—that portray both her triumphs and her struggles. In addition to a site about the documentary, Watson/DG created a destination for fans that pays homage to the incredibly artistry of Amy Winehouse; to foster this concept, they included a comment submission function on each of the thematic sections, offering an interactive experience for visitors and fans to express their feelings. They can continue the conversation on social media because virtually every image and quote on the documentary’s website is shareable, including several static images of the singer paired with her lively quotes. Thanks in part to the film and its website, Winehouse lives on through her fans.